Home » Eagles Falter to No. 22 Clemson in Regular Season Finale 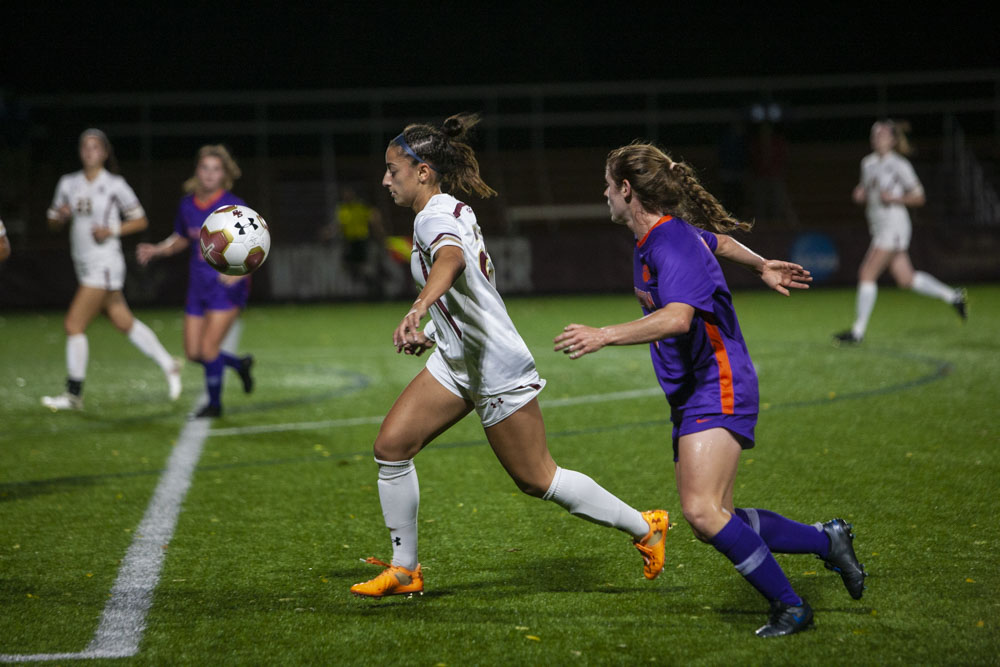 Eagles Falter to No. 22 Clemson in Regular Season Finale

On Friday night, the regular season and a painful month of October finally came to a close for Boston College women’s soccer. Similar to several other games this year, the Eagles took a lead in the second half—only to watch No. 22 Clemson storm back and hand BC a 2-1 setback, its fourth loss in a row.

The Eagles (8-8-2, 1-8-1 Atlantic Coast) finished the month of October with a woeful 0-6-1 record, struggling mightily in conference play. Olivia Vaughn’s 52nd minute goal, her seventh of the season, gave BC hope of springing an upset on the Tigers (11-5-1, 5-5). But like the loss to Virginia Tech two games prior, the Eagles were unable to hold on.

With the loss, BC finished its 2019-20 campaign—the first under Jason Lowe—with just one ACC win and slumped to last in the conference table. It was a far cry from last year’s campaign, when the Eagles picked up six conference wins and earned the No. 4 seed in the ACC Tournament before going on to the NCAA Tournament. This season, BC was undone by a defense that ranked 11th in the ACC and an offense that managed just three goals in its final four games.

Against Clemson, the Eagles looked promising early. Although the Tigers had a 4-3 edge in shots at the break, BC goalkeeper Allie Augur wasn’t called upon for a save while Clemson’s Sandy MacIver was tested. Vaughn and teammate Mia Karras both sent crosses into the box in the opening 15 minutes to no avail, then Gaby Carreiro rifled a shot from 15 yards out—similar to her effort against No. 1 Virginia—but it skipped wide of the post.

In the 35th minute, the Eagles had the best chance of either team in the first half. Sam Smith, who would eventually register an assist, fed the ball ahead to Vaughn. The senior had a 1-on-1 chance with MacIver, but the Tigers’ senior goaltender from England aggressively closed on Vaughn and made the crucial stop.

Vaughn had another chance after halftime, and she made the most of it. It was Smith who again initiated the play once she got the ball just to the left of the 18-yard box. The freshman deftly found teammate Kayla Jennings at the top of the box, threading a pass through a trio of of defenders, and Jennings quickly fed Vaughn. The senior made no mistake, rifling a shot inside the right post to finish her career 15th in program history for points with 62.

Tigers’ head coach Eddie Radwanksi settled his team down with a pair of substitutions, and Clemson started to forge forward offensively. Augur had to come up with her first two saves of the game in the next five-plus minutes, as Julie Mackin and Mackenzie Smith both got good looks for the visitors.

The increase in offensive pressure would pay off in the 58th minute, and it was a frustrating turn of events for the Eagles. After a corner kick, Karras came up with a clutch goal-line stop on a shot from Hal Hershfelt, but the rebound went right out to Smith. The senior defender had no problems converting from six yards out, unleashing a shot that tucked under the crossbar.

The Tigers had an opportunity to take the lead just five minutes later, when Augur had to deny Kimber Haley, but then the game settled into a deadlock. The next 12 minutes were largely devoid of action, and Lowe even shuffled his roster with four substitutions. The changes didn’t have much of an impact, though, and eventually Clemson broke through again.

In the 71st minute, Haley delivered a pass to Hershfelt on a run into the box, and the freshman midfielder took a few touches before sending the game-winner past Augur and just within the right post. It was a heartbreaking sequence for BC, as Lowe’s team had a chance for a bit to end the season on a high note. Instead, the Eagles watched as another opponent used a second-half surge to hand them a disappointing defeat.

Overall, BC’s season was marked by two halves—as it often is when the ACC is involved. The Eagles had a high-flying run through non-conference play, nearly perfect with a 7-0-1 stretch. Then, after splitting its first two conference games, BC flipped that record and went 0-7-1 the rest of the way. Repeating last season wasn’t expected—the Eagles lost Sam Coffey to Penn State and additionally saw Jenna Bike and Kayla Duran suffer season-ending injuries before the start of the year—but stealing a few games here and there was well within reason. BC finished with five one-loss games in ACC play, which raises a frustrating “what if,” had the ball had bounced differently in a few of them. 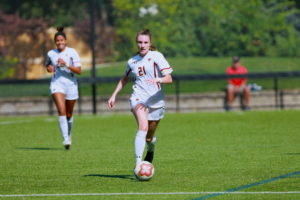