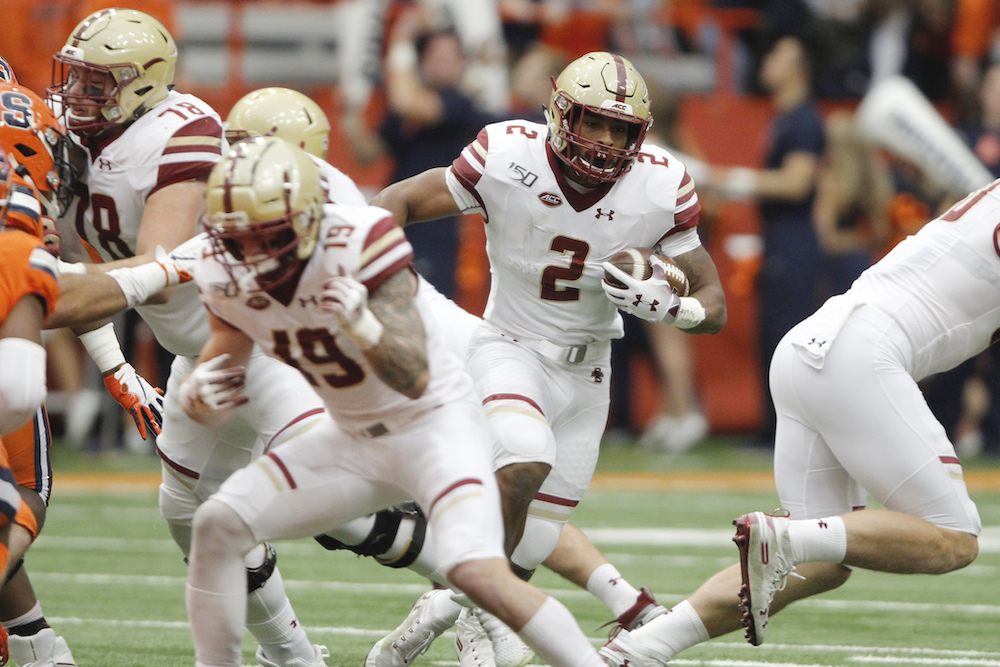 After the first quarter of Saturday’s game at Syracuse, Boston College football seemed poised for a shootout on the road. The teams combined for 27 first quarter points and the Orange held an early one-score lead.

Then, in the span of just 15 minutes, Syracuse folded as the Eagles ran all over their hosts. On the first play of the second quarter, Dennis Grosel connected with Kobay White on a play-action pass for a 64-yard, game-tying touchdown, and the Eagles went on to rack up 34 points in the quarter en route to a comfortable 58-27 win.

BC (5-4, 3-3 Atlantic Coast) bounced back from a blowout loss to No. 4 Clemson and used a methodical, unstoppable rushing attack that the Orange (3-6, 0-6 Atlantic Coast) simply had no answers for. AJ Dillon set the program record for career rushing touchdowns on a day in which he racked up 242 yards and three scores on 35 carries. Backfield mate David Bailey had a similarly prolific day, taking 16 carries for 172 yards and a pair of touchdowns, while quarterback Dennis Grosel was more than effective through the air, going 8-of-10 for 195 yards and three touchdowns—each of which was more than 50 yards.

Throughout the entire first half—and up until the Eagles punted for the first time on their second drive of the second half—BC was in complete control on offense. It marched down the field at will, using Dillon and Bailey effectively and mixing Grosel in as well. The only hiccups were a pair of fumbles—tight end Hunter Long and Bailey both coughed it up—but otherwise managed points on eight of their first 10 drives.

”When you can do what we do like we did it, that’s overwhelming for a defense,” head coach Steve Addazio said. ”First of all, we move at a pretty good clip and what happens on the other side, your DBs, your safeties, they’re taking a beating, they’re tackling 250-pound backs, and if you can stay on the field, you start to wear them down. They start creeping in the box, they start abandoning their coverage and then you’re hitting them on play-actions.”

Syracuse, meanwhile, struggled after the first quarter. After quarterback Tommy DeVito found Aaron Hackett for a nine-yard touchdown and Trishton Jackson for a 26-yard score, the Orange quickly ran into troubles offensively. Back-to-back punts and a fumble by DeVito before the half saw Syracuse enter the intermission trailing by 24 points, and the game was all but over.

After settling for a 21-yard Aaron Boumerhi field goal on the first drive of the game, BC’s offense rebounded with Bailey taking an inside handoff and sprinting 29 yards for a score. Then, after the fumbles on consecutive drives, the Eagles really took over. Trailing, 17-10, Grosel found White on the play-action pass, kickstarting an impressive scoring stretch. Five straight runs opened the next drive, and then BC dialed up the play-fake again and Grosel connected with a wide-open Zay Flowers for a 50-yard score.

The Eagles’ defense fed off the offense, forcing a punt, and BC needed just two plays to find the end zone again. Dillon was stood up for no gain on first down, but then sprinted through a wide-open hole for a 51-yard score. Another punt followed from Syracuse, and the Eagles made the Orange pay. Bailey took the first play of the drive to the house, rumbling 74 yards for the score. Then, following the DeVito fumble, Grosel found Isaiah Miranda—the fifth-string tight end after assorted injuries and a former linebacker—for a four-yard score.

In total, it was 34 unanswered points from the Eagles, and a gut punch that Syracuse wouldn’t recover from. BC forced a turnover on downs to start the second half and added more breathing room with a methodical nine-play, 74-yard drive where Dillon totaled 64 yards and capped it with a five-yard score. DeVito connected with Jackson again for an 85-yard score after a defensive breakdown, but Dillon restored the comfortable lead with a two-yard run after a 10-play, 80-yard drive in the fourth quarter.

It was a dominant win and one that Addazio and BC really needed for the sake of bowl eligibility. The Eagles now have five wins and are getting a second chance at turning a big win into momentum. After the North Carolina State game, BC ran into a buzzsaw in the form of the Tigers, but now it gets to welcome in a struggling Florida State side to Alumni Stadium with a shot at reaching bowl eligibility.