Home » Admissions of White Guilt and Saviorship at the SpeakEasy Stage 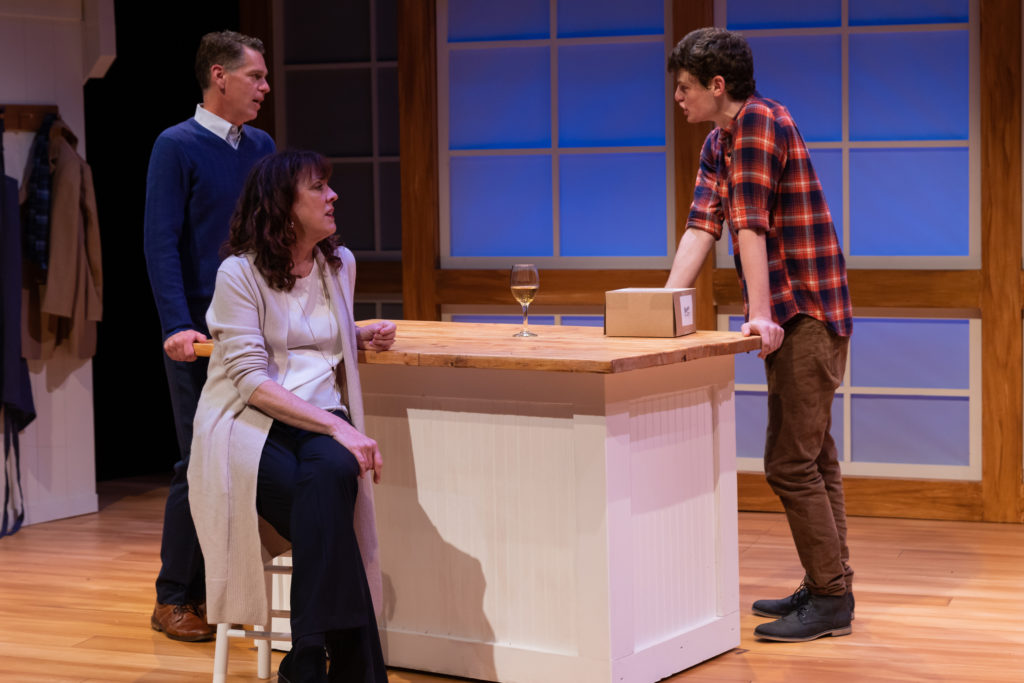 Admissions of White Guilt and Saviorship at the SpeakEasy Stage

In a town like Boston, the politics of college admissions are impossible to ignore. Perhaps SpeakEasy Stage Company was seeking to ruffle feathers when they chose to produce Joshua Harmon’s Admissions at the Calderwood Pavilion. Over one hour and 45 minutes, the play examines the politics of racial privilege in the context of Ivy League applications, preparatory schools, and admissions brochures. The play, published even before the 2016 elections, fits uncannily with the recent college admissions scandals, from Felicity Huffman and Lori Loughlin to Harvard’s affirmative action lawsuit.

Sheri Rosen-Mason (Maureen Keiller) appears to be the perfect progressive, and she knows it. The head of admissions at a prestigious college prep school, Sheri has dedicated her career to increasing the number of students of color enrolled. Near the beginning of the show, she touts her impressive track record: Under her leadership, enrollment of students of color is close to hitting the 20 percent mark. And she is determined to keep improving those numbers.

Her key is to craft the perfect admissions brochure, featuring the right students of color in the right proportions. Unlike old-school administrator Roberta, Sheri would never claim that she “doesn’t see color.” She uses the color of her students’ skin, for their pursuit of higher education and, of course, for her own status in the school.

Things start to fall apart when a family friend’s half-black son gets into Yale University, while Sheri’s own son Charlie is deferred. And while Sheri and her husband Bill can comfortably lecture Charlie about the value of having a female editor of the school paper, they show their truer, uglier beliefs when faced with the fear that their son’s future is compromised.

Admissions is a play written by a white man, with an all-white cast of characters. It seems impossible that such a piece could have anything of real importance to add to the pressing, intricate topic of college admissions. But the play and each of its characters serve as fascinating case studies of whiteness. After all, if a person of color was portrayed in the world of this play, the white characters would not speak as freely as they do.

People of color are talked about in this play. They are discussed, they are held up on pedestals. They are dissected for their accolades, for their grades, for their ability to photograph well for the front page of the Hillcrest brochure. They are not granted the autonomy to appear onstage, but exist only through the lense of the white characters. Implicit in this theatrical choice is the understanding that, for much of history, decisions were made without people of color at the table. For much of history, people of color were talked about—if they were talked about all—by white people. If things have changed, this play suggests that the biggest change is that white people are more aware of their privilege.

Privilege is a conversation that’s wider than race, yet the play, like Sheri, focuses on the visuals of diversity. Roberta, the indomitable elderly administrator, points out that diversity extends to sexual orientation and religion, but Sheri waves it off with a confidence of a straight, Christian woman.

Similarly unrecognized by the play are the privileges and challenges associated with various levels of socioeconomic status. The Rosen-Masons and everyone in their circle are more than comfortably wealthy. Sheri and Bill have even been able to stockpile thousands of dollars for Charlie’s college, and they are close with many high-level administrators at Ivy League schools. Community college is spoken about with absolute disgust and disregard for its importance in the lives of students with a low socioeconomic status and first-generation college students—unsurprisingly so, as it exists completely out of the sphere of these well-off New Hampshire educators.

Admissions is a play about veiled, suburban, well-intentioned racism. It’s about white saviors expecting gratitude for making room at the table for students of color. It’s about why all the black students sit together at the cafeteria together—and why white people are uncomfortable about it. It’s about white men who feel like the world is against them these days. It’s about white people who can’t acknowledge their privilege without feeling like they’re being attacked for it.
Guilt is the heaviest price white people are willing to pay for their role in the minoritization of people of color, Admissions concludes. And until that changes, nothing else can.