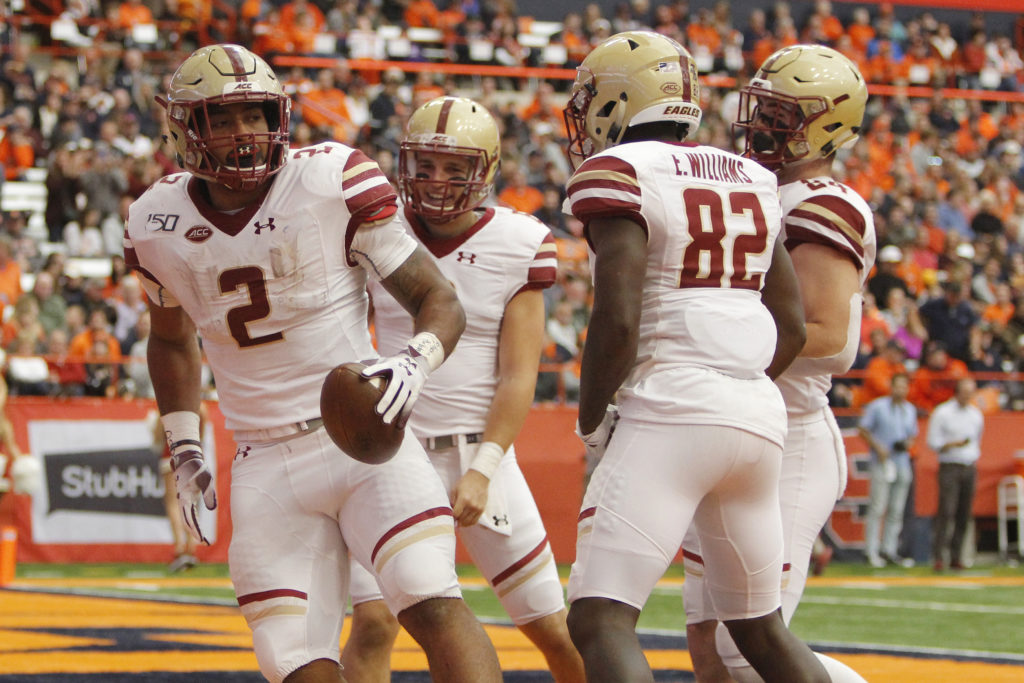 One week after being blown out by Clemson, 59-7, Boston College football bounced back in a big way at the Carrier Dome. Behind a dominant performance from the offensive line, everything seemed to work for the Eagles, who broke the program record for most yards in a game with just under 14 minutes left in the fourth quarter.

Meanwhile, the defense stepped up after allowing 17 points in the first quarter, helping turn what initially looked like a shootout into a 58-27 blowout win. Here are six observations from the victory, which moved BC within one game of bowl eligibility.

Two weeks ago, against a North Carolina State team that, at the time, had the fifth best rushing defense in the country by yards allowed, the Eagles put together their best rushing performance of the year. Thanks to 150-plus yard games from both AJ Dillon and David Bailey, BC rumbled for 429 yards on the ground. Saturday against the Orange, albeit against a much worse defense, the Eagles eclipsed that mark in the third quarter. BC finished the day averaging 7.6 yards per carry with 496 total rushing yards.

The tone was set from the first possession of the game. Dillon—who totaled 242 yards and three touchdowns on 35 carries—shed multiple tackles and gained 11 tough yards on an inside run, before taking an outside handoff for seven more yards. That drive ended with a 21-yard Aaron Boumerhi field goal, but BC finished off its next drive the right way. On 2nd-and-10 from the Syracuse 29, Tyler Vrabel and Zion Johnson combined to carve open a huge gap, and Bailey walked into the end zone for an easy touchdown.

Seemingly everything in the Eagles’ playbook worked. On a delayed counter handoff, Dillon sprinted 51 yards to the house, with no Syracuse defender in sight. The very next BC possession, Bailey bounced a simple power run outside, dashing through a giant hole created by the left side of the Eagles’ offensive line and cruising into the end zone for a 74-yard score. All day long, BC’s offensive line absolutely dominated the trenches, opening gap after gap for all of the Eagles’ running backs, from Dillon to Bailey to even Andrew Strader, who saw time in the fourth quarter and gained 19 yards on yet another run to the left.

But perhaps no play greater encapsulated BC’s dominance on the ground than Dillon’s second touchdown. With the Eagles already leading, 44-20, the New London, Conn., native drove straight up the middle, pushing a crowd of Orange defenders over the goal line for a five-yard score. Even when Syracuse got its hands to BC’s running backs, it was simply no match for the Eagles’ physicality and power.

Because BC was so effective running the ball all day, Dennis Grosel wasn’t asked to throw the ball many times—he finished the day with only 10 passing attempts—but when he did, the result was often pretty.

With the Eagles trailing, 17-10, early in the second quarter, the redshirt sophomore faked a handoff to Dillon and dropped back. Spotting a wide-open Kobay White, Grosel uncorked a beautiful deep ball, hitting the redshirt junior in stride for a 64-yard touchdown.

He would repeat the feat just seven minutes of game time later. On another play-action pass, Grosel targeted a wide-open Zay Flowers streaking down the left side of the field uncovered. This time he underthrew Flowers slightly but still got the job done, connecting with the freshman for a 50-yard score that put BC up, 24-20.

Grosel’s most impressive throws arguably came in the third quarter though. On a 3rd-and-8, he hung in the pocket, before delivering a pinpoint throw to Kobay White on a crossing route to move the chains. Three plays later, with time running out in the third period and the Eagles once again facing 3rd-and-long, Grosel slid to his left before coming back across the field, hooking up with Ethon Williams over the middle for a 28-yard gain. All told, Grosel finished the day an efficient 8-for-10, and threw for a total of 195 yards, turning in by far his best performance as BC’s starter.

When the game started, it appeared whoever gained the ball last would be the team that won the game. The teams combined to score on eight of the first 11 games of the drive. The other three series were two BC fumbles—both of which turned into Orange scores—and a three-and-out for Syracuse that gained just five yards. When the run of scores finished, the Eagles led, 24-20, with 7:27 still to play in the second quarter.

After BC took that 24-20 lead, it scored three more times before the end of the half. The Orange? It was shut out for the remainder of the quarter and scored just seven points the rest of the game. On all levels, the Eagles’ defense turned in one of its best performances of the year. In the trenches, BC’s defensive line plugged gaps in the run game well, limiting Syracuse to just 3.8 yards per carry on 42 attempts. Additionally, against one of the worst offensive lines in the country, the Eagles finally were able to generate some pressure on the quarterback. Brandon Barlow stepped up with a pair of sacks, and Max Richardson ran his team-leading total to 3.5 quarterback takedowns.

Even when Orange quarterback Tommy DeVito did manage to get outside the pocket, the Eagles linebackers and defensive linemen rallied to prevent big plays. DeVito had just one rush of more than 15 yards—a 33-yard gain in the third quarter—and Richardson even caused a crucial DeVito fumble with 3:47 to play in the second quarter, forcing the ball out of the sophomore’s hands as he stretched for extra yards along the sideline.

Meanwhile, the BC secondary, which was torn apart by Trevor Lawrence and Co. in Death Valley, largely looked good in coverage all day long. Josh DeBerry got his hand to a deep shot from DeVito—who finished 25-of-36 for 289 yards—to force fourth down, while the Eagles swarmed to the quick screens and short throws that the Orange attempted and, for the most part, wrapped up well. Richardson made a particularly impressive play on a wide receiver screen in the fourth quarter, knifing through an attempted block and dropping Taj Harris for no gain. The one blemish? A 85-yard touchdown pass from DeVito to Trishton Jackson in the third quarter where the redshirt junior got behind Jason Maitre.

The game could have been even more lopsided but for a pair of uncharacteristic mistakes by BC’s offense. In the first eight games of the season, the Eagles turned it over just six times—seventh-fewest in the country—but on Saturday, BC fumbled on two consecutive plays. First, Grosel fired a dart to Hunter Long, and the redshirt sophomore turned upfield looking for extra yardage, but lost the ball thanks to a big hit from Andre Cisco. That change in possession led to a Syracuse field goal.

The next Eagles turnover was more costly. On 1st-and-15, David Bailey was swarmed at the line of scrimmage and Trill Williams ripped the ball out of the sophomore’s hands. Three plays later, DeVito connected with Jackson for a 26-yard touchdown, giving the Orange a brief 17-10 lead.

Make that four games this season with a botched snap for BC. In three consecutive games against Rutgers, Wake Forest, and Louisville earlier in the season, the Eagles also couldn’t get a snap down correctly on a kick attempt, and it arguably cost BC the game against the Demon Deacons. Saturday against the Orange, the Eagles’ kick execution woes once again reared their heads.

After Bailey’s 74-yard touchdown made it 37-20 in favor of the Eagles, Grosel couldn’t get the snap down on the extra point attempt and was forced to throw incomplete to Long. The loss of the point didn’t end up harming BC against Syracuse, but the Eagles will have to be better with that down the stretch with three tough regular season games remaining.