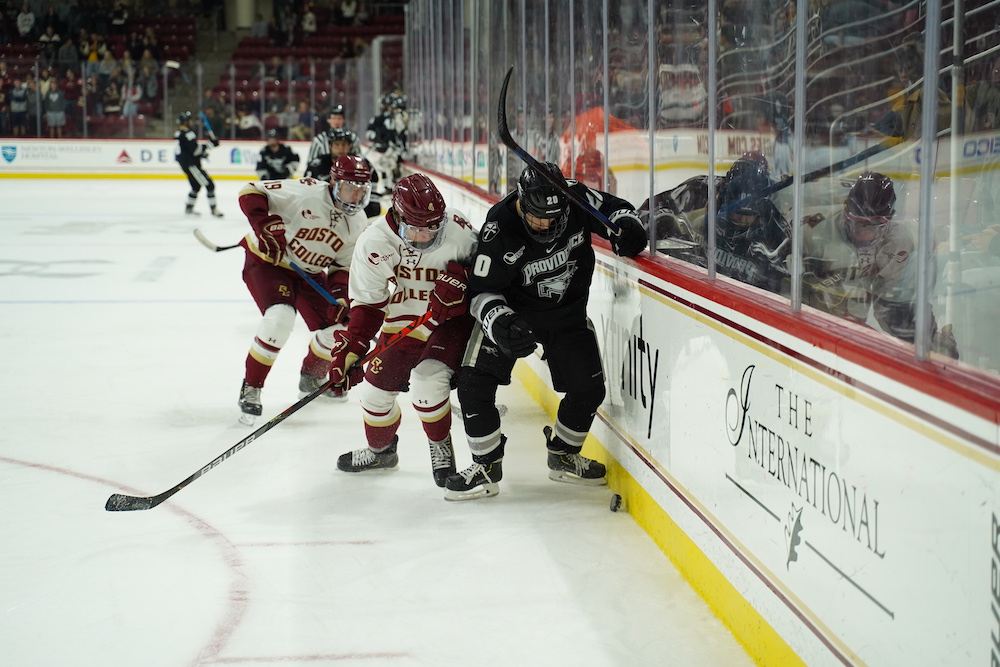 After a disappointing loss to Providence last weekend, Boston College men’s hockey rebounded with a victory against the No. 7 Friars on Saturday night. In this weekend’s contest, three second-period goals, coupled with a crucial penalty kill in the final minutes, proved to be the difference for the 15th-ranked Eagles in a narrow 3-2 victory.

BC’s (3-4, 1-2 Hockey East) top line of David Cotton, Julius Mattila, and Aepeli Räsänen combined for six total points in the victory. Freshman goaltender Spencer Knight also played well, stopping 29 out of 31 shots on net. It snapped a four-game losing skid for the Eagles and evened the season series up with Providence (4-3-1, 2-2) in the process.

BC squandered multiple opportunities to score in the first period of play. With two power-play chances, the Eagles still couldn’t crack Friars’ netminder Michael Lackey. BC did, though, control much of the momentum in the period. It carried a 10-5 advantage in shots and likewise also dominated time of possession. That said, after a loss to the Friars in the previous week, BC certainly would have benefitted from a goal early in the game.

Ultimately, Providence was the first to cash in on a power play just five minutes into the second period. Crashing in through traffic from the left wing, Jack Dugan beat Knight for the score. Later in the period, Providence left winger Greg Printz rattled Aepeli Räsänen with an illegal high hit. Along with Printz being ejected from the game, the Eagles also received a much-needed third power play of the game. The team rallied after the unsportsmanlike conduct infraction and surged confidently into the power play.

Both Alex Newhook and Cotton came up with goals on the extended power play, providing BC with a 2-1 lead. The Eagles kept their foot on the gas for the remainder of the period. In the final 12 seconds, Cotton fed Mattila for a smooth right side one-timer, handing BC a much-needed insurance goal.

The third period brought on more resilience and fight from the Friars. The Eagles, and their slim 3-1 lead, were in jeopardy. After an undisciplined check from behind by Cotton that earned him a major penalty and misconduct infraction, Providence was gifted five-minute power play. The Friars wouldn’t waste the opportunity and scored during the waning minutes of the third period. Tyce Thompson’s wrist shot snuck by Knight, cutting the lead to 3-2. Despite even more of an offensive flurry from there, the Eagles were still able to hold on, killing Cotton’s penalty and securing the win.

Regardless of any early season struggles, BC pulled off an impressive and crucial victory against a highly-ranked Providence team on Saturday night. The Eagles’ offense, although inconsistent earlier this season, played well enough to get the job done. Then, strong play from Knight squandered any chance of a Friar comeback bid. When its top line and talented goaltender are feeding off each other, there’s a good chance that BC can hang with anyone in the country.

BC Knocks Off No. 4 Duke in Regular Season Finale
BC Flexes Offensive Muscle, Beats Providence 5-2