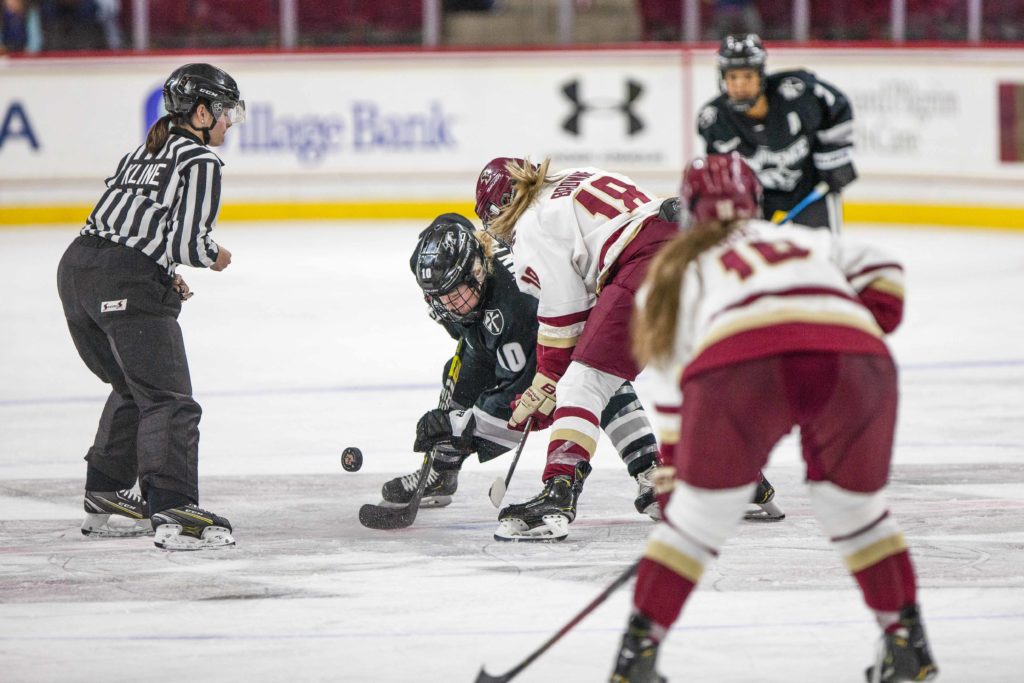 At this point, it seems like a new player steps up to turn in a multi-goal effort basically every game for Boston College women’s hockey. In the last two outings, Hannah Bilka scored twice against Maine and Kelly Browne tallied four times against New Hampshire. On Saturday afternoon against Providence, it was Delaney Belinskas’ turn. The senior scored twice, guiding the Eagles to a comfortable 5-2 win against the visiting Friars.

The scoring started right away in this one as Savannah Norcross gave the Eagles (9-0-1, 8-0-1 Hockey East) a 1-0 lead over Providence (4-4-2, 2-2) just one minute and 26 seconds into the game. The talented sophomore received a great pass from Jillian Fey as the pair came down the ice on a 2-on-1 opportunity. Then, Norcross placed the puck right past Providence goaltender Clare Minnerath for her sixth goal of the season.

Following the scoring play, the Eagles ramped up the aggression on the defensive end of the ice, blocking several of the Friars shots. Neither BC nor Providence were able to convert on their lone power-play opportunities of the period, while the Friars were only able to log five shots on net in the period—which were all saved comfortably by Eagles goaltender Maddy McArthur, allowing them to take the 1-0 advantage into the first intermission.

The second period began very much like the first with an early goal, but it came from the Providence side this time. Only 26 seconds into the frame, the Eagles’ defense gave the puck away in the neutral zone to Providence forward Maureen Murphy, who then took the puck down the ice on a breakaway and beat McArthur for the goal to even up the score at 1-1.

A little over a minute later, the Eagles regained the lead on a goal from Belinskas. The Florida native used her blistering speed to beat a Friars’ defensemen to the puck before converting on the breakaway. Fey was credited with the assist, giving her two points on the night.

The Eagles extended their lead to 3-1 on a goal by Caroline DiFiore off a great feed from Lindsay Agnew from behind the Providence cage. Like Fey previously, this play also gave DiFiore two points on the afternoon, as she was credited with an assist on the opening goal of the game.

Following the scoring play, the Eagles received two power-play opportunities. On the first power play, BC failed to convert despite a shot off the pipe from Browne. Browne was clearly eager to get back on the score sheet following her four-goal performance against UNH on Friday night. On the subsequent power play, Browne beat Minnerath off a magnificent assist from her linemate Hannah Bilka. With this goal, the dynamic duo of Browne and Bilka have now combined for 35 points in just 10 games.

The Eagles extended their edge over the Friars to 5-1 on yet another spectacular play by Belinskas while on the penalty kill. She powered her way through three Providence defenders to gain possession of the puck before firing a shot past Minnerath for her second goal of the day.

“I had a couple bounces go my way there, and I just kept pushing and pushing,” Belinskas said. “I got my head up at the last second and she gave me what she gave me.”

This goal led to a goalie switch for Providence, as Minnerath gave up five goals on just 15 shots. Providence opted for Sandra Abstreiter instead, and the second intermission began with the Eagles leading by the same score.

The third period went by very quick, with only one scoring play. With three minutes to go in the period, Providence’s Murphy scored her second goal of the game while on the power play to make the score 5-2 in favor of BC. Despite giving up a power-play goal, head coach Katie Crowley was very impressed with her penalty kill, which struggled mightily in last weekend’s tie with Maine.

“I think that we focused a little bit on blocking some shots and tightening up our penalty kill,” Crowley said. “They know it’s important that they put their body on the line and make some blocks for your goaltender. It was much better today.”

Through 10 games, the Eagles are unbeaten and have dropped just two points in conference play—the aforementioned tie with Maine. BC has looked explosive offensively, scoring three or more goals in all but one of its games thus far. As a result, the Eagles enter a stretch of just two games in 11 days with the conference’s top-two players in points (Browne and Bilka), the No. 1 scoring offense, and the No. 2 scoring defense.