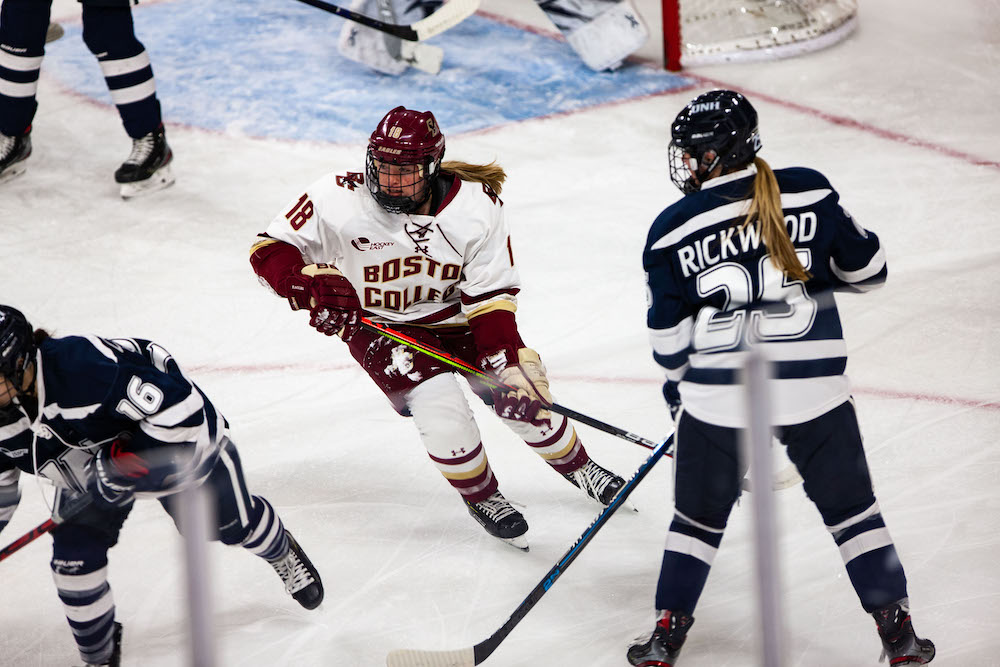 Boston College women’s hockey forward Kelly Browne hit the crossbar and went bar down on New Hampshire goaltender Ava Boutilier—it was a season-defining moment for the sophomore. Browne, who has struggled to find the back of the net so far this season, wasn’t done, though. She went on to light the lamp once more, capping a career-best four-goal performance. Her scoring prowess, as well as the support from her offensively savvy linemates, boosted the No. 7 Eagles to a 5-2 win over the visiting Wildcats.

BC (8-0-1, 7-0-1 Hockey East), which had been plagued by penalties in a loss to UNH (4-4-2, 3-3-1) last season, couldn’t stay entirely out of the box in Friday afternoon’s game. The Eagles registered four penalties throughout the 60-minute matchup while the Wildcats only forfeited two man advantages. But despite this self-imposed weakness, Friday’s game had a vastly different outcome than last January’s contest between the two programs. And yet, none of the seven goals scored in BC’s win came during the 12 penalty minutes.

The first period showed a significant increase in pace from the Eagles’ previous outing, with less of a back and forth between the two teams and more offensive dominance in favor of the Eagles. Hungry for a win, it’s no surprise that the home team tallied the first goal. Browne’s first of the game came late in the first, with a slick backhand pass from freshman Hannah Bilka. The tape-to-tape pass landed perfectly on Browne’s stick, allowing her to spin and snipe just inside the post, beating Boutilier.

But Browne was far from finished with her scoring spurt. Not two minutes later, Browne skated back through neutral ice, skating circles around UNH before receiving a cross-ice pass from freshman defender Alexie Guay. Browne collected the puck, adjusted her hold on it, and took a calculated shot. Boutilier, unable to close her five-hole, allowed the puck to trickle into the net, giving the Eagles a 2-0 lead to close out the period.

“Shooting the puck more is obviously something that we want to try to do,” said head coach Katie Crowley following the win. “And I thought they did that tonight.”

The Eagles, a team that was outshot by Maine, 26-20, led the visiting Wildcats in shots on goal in each period with a final shot total of 37-25. Of those shots, 16 came in the first frame, the most offensively dominant period for the Eagles. Starting the game with an offensive surge was a clear advantage for the home team, as the more sluggish looking Wildcats were kept to only three shots in the same period, giving away their chance at an early lead.

But with the start of the second period came new challenges for the Eagles. The Wildcats came out of the intermission refreshed and reinvigorated, ready to cut down BC’s lead. And the visiting team succeeded in that mission after merely three minutes of play. UNH senior Nicole Dunbar came streaking virtually uncontested into BC’s end, carrying the puck off a pass from sophomore Lauren Martin. With a deadly accurate wrist shot that beat BC goalie Maddy MacArthur, Dunbar cut the Eagles’ lead in half.

Minutes passed without retaliation from the Eagles—each side collected a penalty, but neither was capitalized upon. Then, once again, Browne stepped up to the occasion. With the clock winding down in the second period, the Massachusetts native forced a turnover in UNH’s zone, creating her own space, and shooting the puck into the back of the net with practiced ease. With that tally, Browne collected her first career hat trick with the Eagles, a feat that she would improve upon shortly after.

For the third time that game, Bilka had a hand in advancing Browne’s career night. The Hockey East Rookie of the Month handed a beautiful pass to her center who took her time finding an opening in Boutilier’s defenses before firing it into the back of the net once more. Browne’s fourth goal against UNH marked the 11th time in program history that a single player scored four goals in a game—and the second time this season after Bilka’s four-goal performance against Holy Cross on Oct. 3.

In addition to signifying Browne’s career-high in single-game goals, the tally also caused the Wildcats, who now had a three-goal deficit, to change goalies.

A penalty called on BC in the dying seconds of the second period forced the Eagles to enter the final frame shorthanded, a disadvantage for the home team that gave UNH the opportunity to stage a comeback. And yet, even after another pair of penalties and time playing 4-on-3, BC came out unscathed, as the Eagles’ penalty kill kept the puck out of their own net.

Midway through the period, the goal lights came on again, and this time it wasn’t at the hands of Browne. Rather, it was BC’s Willow Corson who added to the Eagles’ lead with a shot through the five-hole of Nikki Harnett, UNH’s backup goalie.

Despite the odds being stacked against them, the Wildcats refused to give up before the final horn, increasing their efforts in the final minutes of the matchup. And those efforts did not go without success, with UNH freshman Tamara Thiérus netting the final goal of the game against McArthur.

But the desperate efforts by the visiting team were not enough to force overtime against the Eagles, leaving BC victorious once again. And while one might praise Browne for her incredible performance, the star was quick to give credit elsewhere.

BC Flexes Offensive Muscle, Beats Providence 5-2
Admissions of White Guilt and Saviorship at the SpeakEasy Stage