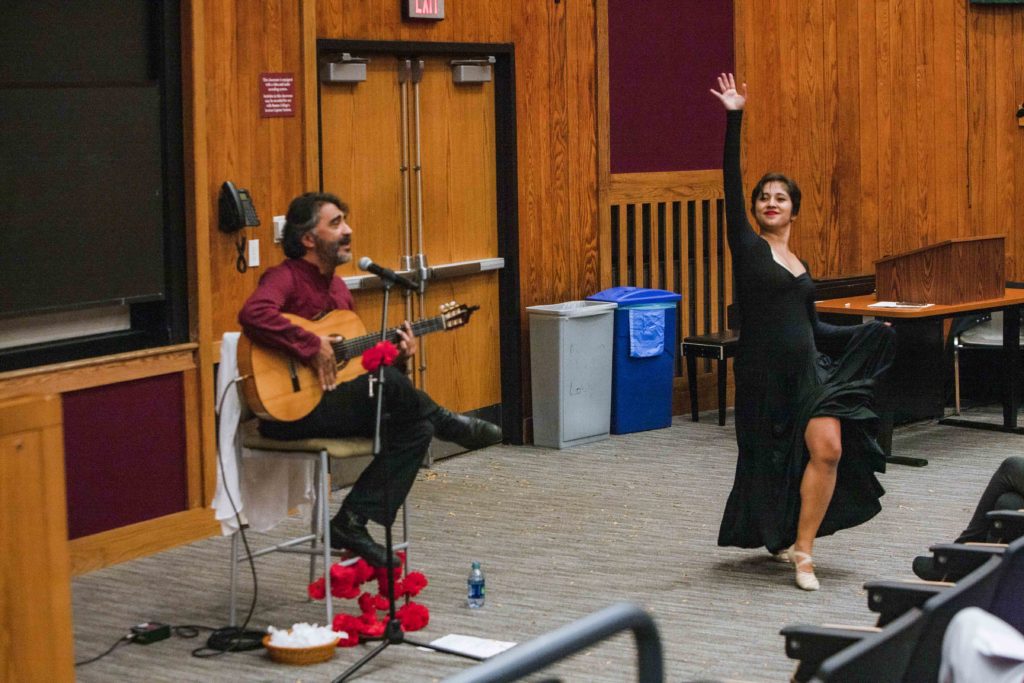 The combination of art and activism is not a novel concept, although two Guatemalan artists in a Boston College auditorium singing and dancing about civil war is something that demands attention.

On Tuesday, Oct. 29, the Center for Human Rights and International Justice hosted Guatemalan artists Fernando López and Gabriela Alvarez Castañeda for a moving performance. López, a guitar player and singer currently based in Ireland, and Alvarez Castañeda, a dancer based in New York, co-produced the performance to tell a story of Guatemalan injustices, emotions, and memories of migration. López and Alvarez Castañeda performed for a small crowd in McGuinn 121 for about an hour, utilizing both song and dance to promote social activism.

The entire performance was moderated by Lynch School of Education and Human Development professor Brinton Lykes, who assisted López and Alvarez Castañeda in translating their speeches and explanations from Spanish to English so that all in attendance could understand the show.

The Migratory Tour of Love and Memory performance was able to move beyond the barriers of language, however, convincingly using song and dance to convey the trials and struggles that the Guatemalan people have gone through.

López and Alvarez Castañeda’s art was primarily focused on the civil war and counter-insurgency movement that occurred in Guatemala from the early 1960s to late 1990s. This is why memory was such a main focus of the performance—López told the crowd that their art attempts to “bring back the memory of people who have been lost,” honoring the roughly 45,000 Guatemalans who disappeared at the hands of the government during the period of conflict.

Reminiscent of the lore of oral storytellers and folk tradition, López and Alvarez Castañeda poured intense vulnerability into their song and movement. Making art about the past was a way for López and Alvarez Castañeda to ensure that future generations will never forget the horrific tragedies that happened in Guatemala only a few decades ago. They were able to successfully translate the emotion, pain, love, fear, hope, and despair of their ancestors, creating a valuable artistic history lesson that transcended everyday speech.

López, a technically brilliant guitar player, usually played in a more traditional Hispanic style of guitar, his hands flying across the strings to create intricate and often forlorn melodies. While his speaking voice and demeanor was relatively unassuming and reserved, López came alive as he performed. Weaving through the upper registers of his voice, López commanded attention and oozed confidence as he sang.

However, the show was clearly a partner effort. Alvarez Castañeda’s dancing elevated López’s guitar playing and made the performance feel even more emotionally poignant. Alvarez Castañeda would enter and exit the auditorium during different times of the performance, changing from an embroidered frock to a black dress to a simple cream button down. Her dancing was equally beautiful and diverse, as she often held athletic poses with one leg extended high in the air or spun around the room, creating beautiful shapes as she swung her arms.

One of the most striking moments of the Migratory Tour of Love and Memory was when López and Alvarez Castañeda performed a song called “Solo Queremos Ser Humanos,” which translates to “We Just Want to Be Human.” The song reflected the overall tone of the show—a soulful and heartbreaking remembrance of violence, while still holding an inextinguishable hope for justice and future peace.

López sang in falsetto, taking frequent breaks to address the audience in a normal speaking voice. Alvarez Castañeda twirled across the room, throwing her hands up in the air as if she was reaching for something higher.

While the artists emphasized in a question and answer session at the end of the show that the situation in Guatemala is still challenging and unstable, they are hopeful that their art can help inspire a worldwide conversation about the political injustices that still exist today. Two people might not be able to change the world, but the Migratory Tour of Love and Memory shows just how truly powerful art can be.