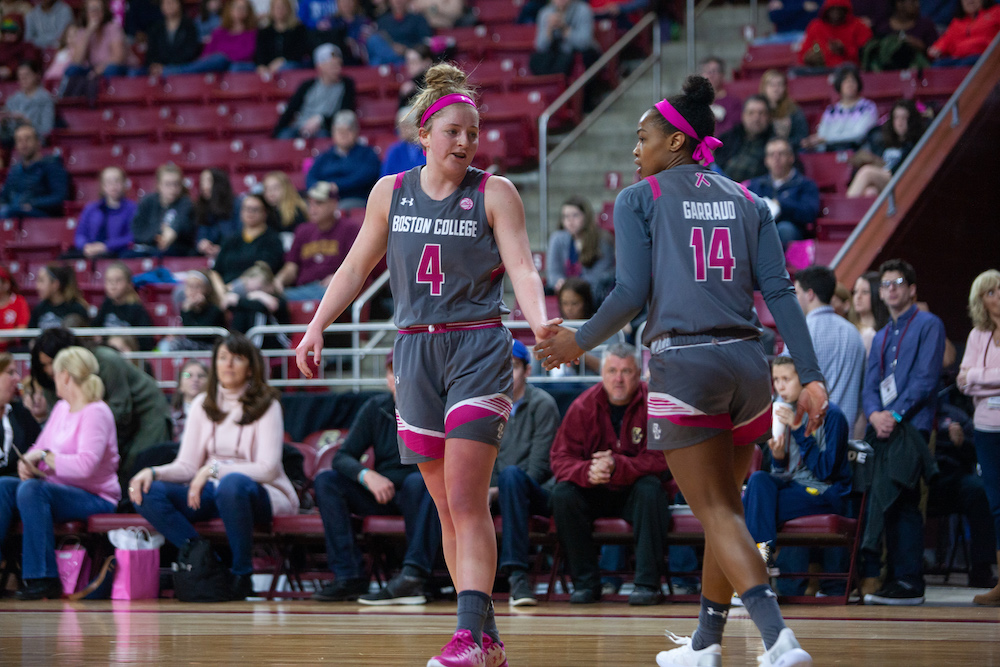 It’s year two of the Joanna Bernabei-McNamee era for Boston College women’s basketball, and the Eagles are hoping to build off a season in which they rolled through non-conference play before struggling against the elite competition of the ACC. Bernabei-McNamee’s up-tempo offense and doggedness on the boards produced plenty of results on one side of the court, but BC’s defense was porous and couldn’t manufacture many stops. Now, with a transfer from Colorado and largely the same rotation, the group is looking to run it back in 2019-20 and take the next step in conference play.

Under Bernabei-McNamee, the Eagles wanted to push the tempo and take a step forward offensively. In Erik Johnson’s last year as head coach, BC ranked 234th in the country in offensive rating, per HerHoopStats, and managed just 68.6 possessions per 40 minutes, which ranked 249th. Bernabei-McNamee wanted to rely on her incoming guards, Makayla Dickens—who decommitted from Albany to follow the coach—and Marnelle Garraud, to push the tempo, and also wanted a renewed focus on the glass with established paint players like Emma Guy and Georgia Pineau.

BC played fast on offense—the team’s stats were almost unrecognizable from the year prior—but struggled to find results once the perils of conference play set in. The Eagles had a high-flying scoring attack but couldn’t stop anyone in the ACC, allowing a conference-worst 83.8 points per game. BC’s non-conference push was impressive as it started the year 11-2, but it went just 3-14 the rest of the way.

“I think they really showed a big jump in improvement with just being competitive,” Bernabei-McNamee said. “And [with] being able to play at a higher pace. Emma Guy played really well and I thought as a freshman Makayla Dickens really was able to prove herself which was really important to her.”

Emma Guy was a force down low, averaging 14.1 points and 6.6 rebounds per game, while Dickens was a breakout star. She averaged 11.8 points per game, 5.3 rebounds, and 3.9 assists in her first collegiate season. Overall, the Eagles had a top-50 offense, but were done in by a defense that ranked 328th of 351 D-I teams.

With Konkwo out for the season with a torn ACL, the Eagles only really add one significant piece to last year’s team, which was untouched by graduation. Swartz figures to factor into the starting lineup and brings an explosive offensive presence, but the biggest thing for Bernabei-McNamee to focus on is the defense. BC needs to improve in that department or will suffer a similar fate in conference play. The Eagles have the offense to again roll through non-conference play, but the emphasis will be on crashing the boards and finding some form of defensive identity.

“We don’t have a lot of change,” Bernabei-McNamee said. “The core of the program is the exact same as last year … I think that them understanding, being a year smarter and a year more mature, that’s where I hope we can steal a few games.”

POTENTIAL LINEUP
Note: Bernabei-McNamee hasn’t settled on a starting five, so take this with a grain of salt.

PG: Makayla Dickens — The biggest issue for Dickens last year was turnovers, as she averaged almost five per game. If she can reduce that number while continuing to fill up the stat sheet, Dickens is poised for a long tenure as the facilitator of the offense.

SG: Taylor Ortlepp — Ortlepp has had the green light to fire away from deep for several years now, and she attempted 7.1 triples per game during conference competition last year—the fifth-most of any ACC player. A career 31.3 percent shooter from distance, Ortlepp is averaging 10.2 points per game in her 79-game career and also nearly had a 3:1 assist-to-turnover ratio last year.

SF: Sydney Lowery — She started seven of the final 10 games last year, working her way back into the rotation with capable play off the bench. The junior played plenty of minutes in her first two years on the Heights but needs to improve from the field—she’s a career 36.3 percent field goal shooter.

PF: Georgia Pineau — Pineau has been nothing short of durable the last three seasons, clocking in 76 starts and almost 30 minutes per game. She’s one of the team’s most creative passers (averaged 2.6 assists last year) and is also a capable rebounder, pulling in six per game in her career.

C: Emma Guy — Guy enters her fourth year at BC with 59 starts under her belt, making her one of the team’s de facto leaders. She’s coming off a season in which she averaged career highs in points (14.1), minutes (27.2), and field goal percentage (59 percent).

F Taylor Soule — When it all comes together for Soule, she’s truly going to be a weapon for the Eagles. She stands 5-foot-11 and is an explosive athlete that has a knack for getting to the rim at will. Soule only managed four rebounds a game last season, though, which is something she’ll have to improve upon since she should be able to get second-chance points.

G Cameron Swartz — In a heartwarming (and significant) moment, Bernabei-McNamee announced at practice that Swartz would be immediately eligible, rather than having to wait until January. She’s a combo guard who can stretch the defense with her 3-point shooting and strong midrange jumper.

G: Marnelle Garraud — Garraud had the reigns of the BC offense to start last year but soon took second fiddle to Dickens. She still averaged eight points, two assists, and nearly two steals a game, but also posted a 24.5 percent turnover rate which was in the 24th percentile nationally. If she makes more smart decisions (she also averaged nearly three fouls a game), she and Dickens form a tandem brimming with potential.

G: Milan Bolden-Morris — Bernabei-McNamee identified Bolden-Morris as someone who’s added versatility to her game this offseason, which will be a big gain for the Eagles. She scored five points in 16 minutes per game last year, and adding even more scoring off the bench this year will be a welcome sight.

G/F: Jaelyn Batts — A three-star guard out of Freedom High School, Batts is described by ESPN as an “athletic off-guard that brings size and versatility to the backcourt.” She’s the tallest guard on the roster at 6-feet even, trailing only the likes of Guy, Ford, and Pineau.

C: Clara Ford — The tallest player on the roster at 6-foot-3, Ford averaged just 6.2 minutes per game last season. Unlike Bishop, Hollingsworth, and Klimkiewicz, Ford stuck around as one of what has become a five-person sophomore class. Ford logged 44 rebounds in just 137 minutes last year and has the wingspan to challenge for some playing time.