Lisa Gordon is running for Ward 6 councilor. Her campaign website homepage says, “Your voice at city hall,” and she writes that she will support development, “that is pro-Newton, not pro-developers.”

Gordon grew up in Newton, attending Newton South, according to her website. She relocated to England after college, but came right back to Newton upon returning to the United States. Gordon is currently the executive director of Responsible Retailing Forum. She is pushing for a requirement for local businesses to have a certain number of solar panels on their roofs.

Gordon will work to preserve Webster Woods, she states on her website. Mayor Ruthanne Fuller is currently working to take the woods back from Boston College via eminent domain.

Gordon could not be reached for an interview.

Brenda Noel is seeking reelection for the Ward 6 councilor position, which she has held since 2017. The nine-year Newton resident lives with her husband, twin daughters who are students at Newton South, and her two dogs, according to her website.

Noel has served on the Financial Committee and the Public Safety and Transportation Committee.

She cites two main issues on her campaign website’s homepage: zoning redesign and climate change. Noel writes that she will vote to increase the commercial tax base, as well as revitalize the village centers and make Newton a pedestrian-friendly city. She voted to approve Phase Solar 3, which adds solar panels to city rooftops. The plan could reduce Newton’s carbon footprint by 21 percent, according to her website.

Noel did not respond to requests for an interview.

Alicia Bowman is running for councilor-at-large in Ward 6. A Newton resident of 23 years, she has been actively involved in the community as a leader and advocate.

“I am here for the city,” Bowman said. “I am running because I am really worried about these issues, and I know we aren’t really working hard enough.”

She has served as a Parent Teacher Organization president, has pioneered the creation of safe routes to school, and has been a member of the mayor’s transportation advisory group for eight years. She has been the president of Bike Newton for three years, and she started Tour de Newton seven years ago.

A driving force in Bowman’s projects has been her concern for climate change. After advocating for this issue for many years, she has transitioned to being involved in work for this issue politically. When the U.N. released its report last year explaining the lack of time to fix climate change, Bowman knew it was time for further action.

“I just felt like there are a lot of great people in City Council doing great things, but there aren’t enough,” Bowman said. “And there aren’t enough people worried about and actively trying to rebate climate change and work towards addressing that.”

Bowman said she believes part of the solution to climate change lies in housing. With the creation of more housing, people could live closer to where they work, allowing them to walk and take public transportation to work.

Her solution also includes reducing large heat islands, planting more trees, and forming a more aggressive plan to move away from natural gas. In the past year, there were 900 leaks in Newton, and National Grid fixed only about 200 of them, she said. Bowman explained that now is the time to fix these issues.

“We should be looking at zoning to say zoning is a great opportunity and a powerful tool for us to achieve our housing goals, environmental goals, and our transportation goals,” Bowman said.

Bowman describes herself as energetic, hardworking, and detail oriented. She feels that her track record on climate change shows how she can bring people together to instigate change.

Greg Schwartz is running for councilor-at-large in Ward 6, a position that he has held since 2012. Schwartz has been a resident of Newton for 12 years. In addition to his position as councilor, Schwartz is also a primary care physician at Brigham and Women’s Hospital. Schwartz has two daughters that attend Newton public schools.

Schwartz said he originally ran for office eight years ago because he wanted to make a changes in Newton. He wanted to see improvements in the budget, infrastructure, and schools.

While he has been in office, three schools were built, and plans were developed to rebuild others. He has helped to address the city’s neglected infrastructure by rebuilding sidewalks, roads, and fire stations.

Schwartz said he was proud of the city’s success in raising the age for smoking cigarettes and e-cigarettes to 21 before it was mandated by the state of Massachusetts. As a member and chair of the Land Use Committee, he has also helped in adding affordable housing units on Austin Street and Washington Place.

Schwartz has also helped in improving efficiency in Newton, including installing LED light bulbs in street lamps around the city. He was also influential in efforts to plant more trees, while reducing the cost per tree and maintenance of replanting. He said he is still focused on improving alternate forms of transportation, specifically bike lanes.

One of Schwartz’s main concerns is climate change. He said he wants to set standards in the special permit process for large projects to reduce energy consumption and promote clean energy. This would be a step toward Newton’s goal of becoming carbon neutral by 2050.

During his time as councilor, Schwartz has learned to listen to both sides of arguments, he said. He also explained how his skills as a doctor have related to his position as councilor.

“That job is rooted in, basically, listening to people, listening to their symptoms, [and] doing a diligent collection of data, both through ordering tests and collaborating and consulting [with] colleagues and then coming to a diagnosis and treatment plan,” Schwartz said. “And that’s the approach that I’ve tried to take—kind of calm, measured, delebrative, and data-driven decisions on issues that come before me as city councilor.”

“And I’m very aware of all that Newton can do and has to offer, and I want to make sure that we are able to maintain that for everyone who comes after,” Schwartz said. “And I care about their future and the environment that they’re growing up in.”

Vicki Danberg is seeking re-election for the councilor-at-large position for Ward 6. She has lived in Newton with her husband since 1977 and has served on the city council since 2004.

Her main points of concern, as listed on her website, are advocating for housing options near public transportation, improving pedestrian safety, planning long-term for the city and schools, and providing renewable and green energy for public buildings.

Danberg could not be reached for an interview.

Ruth Goldman is running in Ward 6 for School Committee for her fourth and final term. Goldman has been on the school committee since 2014 and the chair since 2017.

Goldman grew up and currently lives in Newton. She is a graduate of Newton Public School system, and her children went through the public school system as well.

Goldman has been active in Parent Teacher Organization for seven years and was the co-chair for two years. She has been a part of the Safe Routes to School committee and High School Start Time committee, as well as liaison to the Special Education Parent Advisory Committee, METCO, and the Youth Commission and the Student Advisory Council to the School Committee.

“As chair I end up involved in whatever crisis is going on at the moment, ” said Goldman.

She explained her long history of working with young people. In her six years on School Committee, she has helped to increase the voice of the student representatives on the school board. Goldman was also appointed to the city’s Youth Commission.

“I took it upon myself to create a position of sort of increasing their visibility and voice at the table by connecting with them and meeting with them and giving them basic training about school budget, [encouraging] them to come to certain meetings,” Goldman said.

Goldman has been involved in the Student Assignment Working Group, which attempts to adjust the capacity of schools to prevent overcrowding as enrollment increases, which Goldman feels is one of the larger issues in the Newton Public Schools. She said that three to five of the schools need work, and the committee needs to determine how to improve them. On the high school and middle school level, solving these issues would involve adding more faculty and reallocating resources, she said.

Goldman is also concerned about the social and emotional well-being of students at the high school level.

A Newton resident of 18 years, Galina Rosenbilt is running in Ward 6 for School Committee. Rosenbilt has taught math and physics in both private and public schools. Currently, Rosenbilt teaches as a private math tutor at the Russian School for Mathematics.

“And right now since I am working for the private school, I see that a lot of students from Newton Public Schools are my students in class,” Rosenbilt said. “And my question was … ‘Why does the public school provide us with so many students? Maybe something is wrong.’”

Rosenbilt said she wants to help improve math education in Newton Public Schools, especially in elementary schools. Rosenbilt also said she feels that Newton schools need to be more active in preventing drug and substance abuse and that this issue requires every teacher and counselor to become a proactive drug preventer.

Rosenbilt also said she wants schools to be safe learning environments and not places full of hate. No student should feel targeted, she said.

Rosenbilt has five grandchildren. She said she loves Newton and would like to be an advocate for parents on the school committee. Teaching has been a lifelong passion for Rosenbilt, and she said she cares about improving the quality of education in Newton. 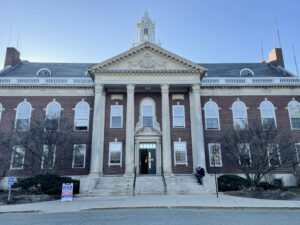