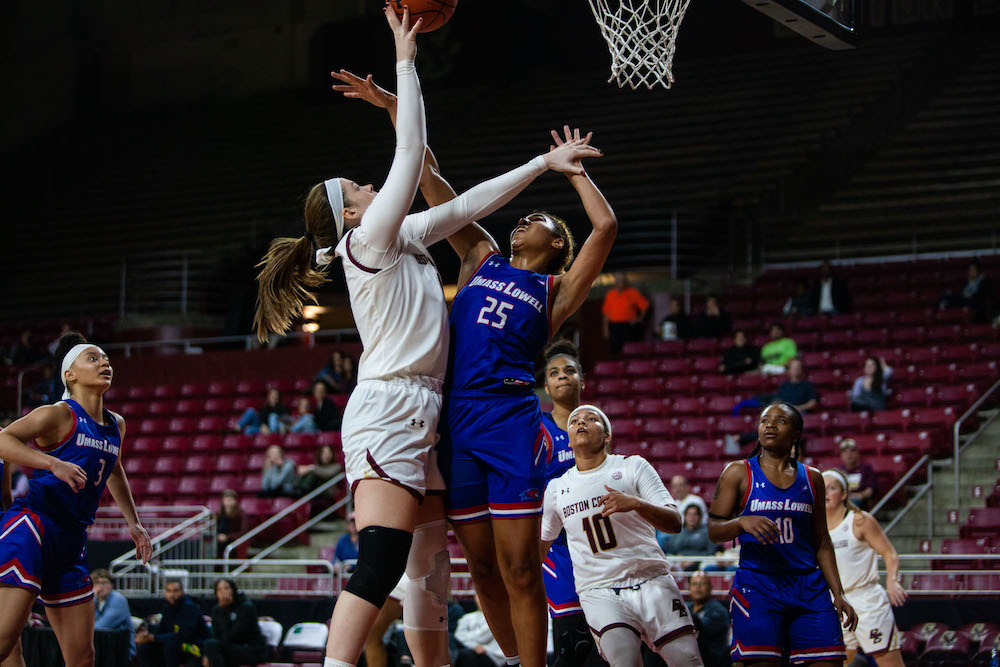 On a much-anticipated opening night, Boston College women’s basketball got its season off to a hot start, taking a decisive 15-point lead after the first quarter and eventually sending Massachusetts Lowell home with a 43-point defeat, 89-46.

In a game in which the Eagles (1-0, 0-0 Atlantic Coast) only shot 49.2 percent from the field, they still managed to rack up nearly 90 points against a young River Hawks (0-1) side. Led on offense by senior captain Emma Guy, sophomore Marnelle Garraud, and sophomore Taylor Soule, BC took the lead one minute into the first quarter and didn’t look back.

Joanna Bernabei-McNamee and Thomas Garrick, head coaches for the Eagles and River Hawks, respectively, are both entering their second season at the helm. Neither of their seasons ended the way they would have hoped last year, and the intensity from both teams was evident from warmups until the final buzzer. The teams’ rosters couldn’t have had less in common, though. While Garrick is working with eight freshman recruits, Bernabei-McNamee welcomed back nine players from the 2018-19 squad.

“One of our team mottos is we always want to act like we’re down two with 30 seconds left, that’s on both ends of the floor,” Bernabei-McNamee said. “Bringing that intensity, but also not a panic because we’ve got 30 seconds.”

That style of play was certainly on display against UMass Lowell, with Guy setting the example for the rest of her team with a composed yet fierce performance. After shaking off the offseason rust in the first quarter, she erupted offensively, ending the night with 20 points, 10 rebounds, and one block. Not to be ignored was Garraud, who shattered her scoring average from last season (eight) with 14 points and six assists.

The game started off with BC’s Taylor Soule winning the tip-off, and Milan Bolden-Morris quickly following that success with a 3-pointer a minute later. After allowing UMass Lowell guard Ren’Cia Rolling to convert on a quick jump shot from right outside the paint with 8:30 remaining, the Eagles held their opponent to only two more points in the first quarter—a layup from freshman Jaliena Sanchez. Sanchez proved to be the toughest challenge of the night, managing 12 points against a predominantly lockdown BC defense.

The River Hawks came out of the brief intermission and seemed to catch BC getting comfortable with their lead, at least initially. Sophomore Kharis Idom knocked down a 3-pointer right off the bat, and the Eagles woke back up. While the statistic might not seem believable if only looking at the final score, the Eagles only outscored the River Hawks 19-16 in the second quarter. The first, and only, technical foul of the night occurred in the second quarter. The offender? Garrick, who sent a player off the bench wearing a number not listed on the roster. The result? Two free throws for BC, taken by Soule.

Like Guy, sophomore Cameron Swartz is another player that seemed to heat up as the clock ticked down. Playing in her first game with the Eagles since transferring from the University of Colorado last year, Swartz, her teammates, and Bernabei-McNamee were still riding high from last week, when the NCAA declared her eligible for the 2019-20 season. Doing so required petitioning to bypass a rule that requires transfers to sit out two semesters after changing teams.

“This was really her first time getting on the floor, she didn’t get to be a part of either of our scrimmages,” Bernabei-McNamee said. “So, this is her first basketball game since last year, so I think it was really a good thing to see her also calm down, I also thought she had a much better second half.”

By the time the third quarter came to an end, the game was all but over. The Eagles led the River Hawks by a score of 66-37, and UMass Lowell couldn’t seem to find a way to slow the fast passing and physical style of play that BC showcased. With an energetic bench cheering on freshman forward Jaelyn Batts, the first-year recruit tacked on two more points to her eventual eight-point total on a strong push to the basket through the paint.

The fourth and final quarter proved to be more of the same—excited cheers from the BC bench, dejected sighs from those to their right, and a strong offensive showing from not only the Eagles’ starters, but the reserves as well. While it’s hard to read much into a blowout, other than the fact that BC needs to shoot and protect the ball better, one thing was clear—the Eagles’ chemistry, the result of having practically the same roster as last year, is perhaps the team’s greatest strength.

“This is probably one of the easiest teams to coach I’ve ever been around.” Bernabei-McNamee said. “There’s no animosity between the players themselves, and they go at each other in practice, and they don’t really ever take it personal. It’s hard to believe that we’re already at this time of year because I think when you’re having fun and enjoy who you’re with, time really does fly.”