Andrew Klavan, a conservative author and talk show host, was met by mass protest at his Tuesday lecture, titled “The Art of Being Free.” In the days leading up to his appearance, several student groups had objected to his history of Islamophobic, racist, sexist, and homophobic comments. He spoke to a Higgins classroom of 50 students, the vast majority of whom were members of the Boston College Republicans.

The BC Republicans-sponsored event—which had been moved to a smaller classroom due to delays in the approval process—-began 15 minutes early, shutting out many of the students who had hoped to protest from inside.

Instead, large numbers of students had gathered in the hallway outside to chant, clap and stomp, as well as occasionally pound on the windows, doors, and walls of the room. The talk was nearly inaudible in the back of the classroom for a large portion of its duration due to the protests.

Luis Duran, president of BC Republicans and MCAS ’21, began the night by saying that he and BC Republicans had been the target of criticism he viewed as unfair.

“We’ve been accused of being things which we are not,” Duran said. “We have been accused of harboring hatreds which we do not. We have been told that our actions are dangerous to others, which they are not … We’ve been slandered, verbally attacked, humiliated … And why? Well, because we dared to decide and speak. Because we dared exercise our God-given right to free speech.”

Duran did not respond to a request for comment.

Though much of what Klavan said was drowned out by the chants of protesters, he spoke at length about truth and bias in modern media.

He said that the media often discusses the thing you have to worry about, or their mission, before they provide you with the actual facts of the case. But a story is a story, and should be treated as such, he said, and not aligned to fit into a narrative or upheld to a moral standard.

The political left is particularly guilty, according to Klavan, of trying to craft a narrative where there isn’t one. The person who decides the perspective of the piece is the person in control, he said, pointing to how media organizations approached the 2016 Pulse nightclub shooting.

“In 2016, a Muslim man [walked] into a gay bar and opens fire and [killed] 50 people,” Klavan said. “What’s the issue? Is the issue anti-gay feelings? Is it Islamic intolerance? Is it guns? Is it just a guy who has nothing to do with anybody else doing something that will never happen again?”

There’s an underlying truth that can be used to tell a false story, he explained. Klavan said that studies have shown that police officers do not use deadly force against black people any more than they do white people. While some studies support this conclusion, others have found that there are racial disparities.

Klavan said that if one can’t hear people they disagree with, as he noted that liberals are often unable to do, then it is impossible to know anything. The left-wing is convinced of their moral superiority, according to Klavan. Ideas are never completely agreed upon in society, but the integration of morals with political issues makes it so that you can’t speak for the opposition, he said.

“So now, everybody against you is evil. It makes you stupid. This has been a concerted effort to make people stupid,” he said. “Socrates said ‘How is that possible? I know that I don’t know anything,’ and that’s what made him wiser than anybody else.”

Several groups of protesters had planned to protest inside of the event by arriving at 7:00 p.m., the advertised start time, and silently walk out at 7:20. The doors of the event room closed, however, and the event began around 6:45 p.m. Five BC Police Department officers were posted outside the doors and would not let anyone enter.

One officer said that the event was full and they were not letting students in for safety reasons, and directed The Heights to Associate Vice President of University Communications Jack Dunn for comment.

Dunn did not respond to a request for comment.

The protest consisted largely of chants outside the room which often were accompanied by claps or stomps to the rhythm, and at its peak included over 100 students at once.

“No hate! No fear! Muslims are welcome here!” went one of the chants. “No justice! No peace! No racism at BC!” went another.

Michael Osaghae, president of the Undergraduate Government of BC and MCAS ’20, said that he attended the protest because of Klavan’s Islamophobic views and that he wanted to contribute to a campus culture of care and concern but was not protesting in his role as UGBC president.

Klavan wrote in his 2015 book The Great Good Thing: A Secular Jew Comes to Faith in Christ that European culture is superior.

“Western thinkers have become so skittish around the idea of racism they will do anything to avoid naming their culture as superior to others, even if it means avoiding the evidence of their own eyes,” Klavan wrote.

“I know students are impacted on the one hand with bad feelings, but also students want to just have a speaker that they think represents their views,” Osaghae said. “There’s a tension there, but also if a speaker is Islamophobic and anti-LGBTQ+, they shouldn’t come here in the context of it’s not even open to students who attend.”

Other students who were there to listen to the talk and not to protest also remained in the hallway for some time after the event began.

“I was just here to kind of listen in to what he has to say,” said Nicholas Lombardi, CSOM ’21. “I mean I don’t really follow Andrew Klavan. I know he writes for The Daily Wire. Honestly, [I was] just curious to hear what he had to say. I figured it’s a free event so I might as well attend.”

Aneeb Sheikh, MCAS ’20, said he was angry that Klavan was speaking at BC, and particularly that the event was being funded with money provided by the University.

BC Republicans opted to spend $6,500 of their $8,000 budget on Klavan, money allotted to all student clubs through the Office of Student Involvement.

“I think it’s very dangerous that first of all BC allowed this person to come, and secondly that our money was used to fund this person,” Sheikh said. “I think first of all, the BC administration should make a statement. I think that College Republicans should apologize for inviting him, publicly. And I think that we need stricter accountability of who we invite on this campus.”

Sheikh added his disappointment that the event’s doors closed well before the advertised start time—as a result, many of the protesters who had planned to sit in on the talk itself were not able to attend.

“I didn’t think it was okay to just automatically assume they’re racist—that really hit me because, you know, like obviously I’m black, I’m a Muslim, and it was a little intimidating being there but at the same time, we should have the right to protest, but they also should have the right to go in and see whoever it is you want to see, that’s on them. Everyone has their own opinion. And I feel like it’s just freedom of speech, like [BC Republicans] said,” Khadija Danazumi, MCAS ’23, said. “It’s not a good thing but like, what can I say? It’s freedom.”

William Foote, MCAS ’22, said that he disagreed with the protest.

“I would say it’s inappropriate to simply silence someone just because of different views,” Foote said. “There is divide in our culture, but this isn’t the solution for it.”

“I’d say over history they’ve sort of been the largest global power, so yes,” he said when asked if he agreed that European culture is superior, although he said he was not familiar with Klavan’s specific comments.

“It’s fun to watch,” said Meloy when asked why members of BC Republicans were standing next to the sitting protesters. “I don’t agree with protests.”

As attendees streamed out of the room at the end of the event, they were met with boos and had their pictures taken by protesters.

“Thank you everybody for showing out and letting them know that we don’t accept things like this at BC, at our campus, out of our money, so yeah, thank you,” one of the protesters said to the group as the night came to an end.

Andrew Klavan BC Republicans. Daily Wire
Creating Chaos: Behind the Scenes of ‘Noises Off’
Syracuse Hands BC Tough Five-Set Defeat 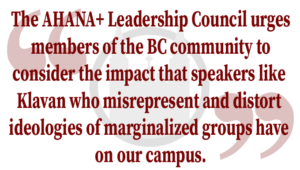 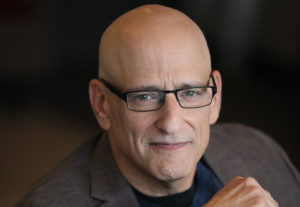