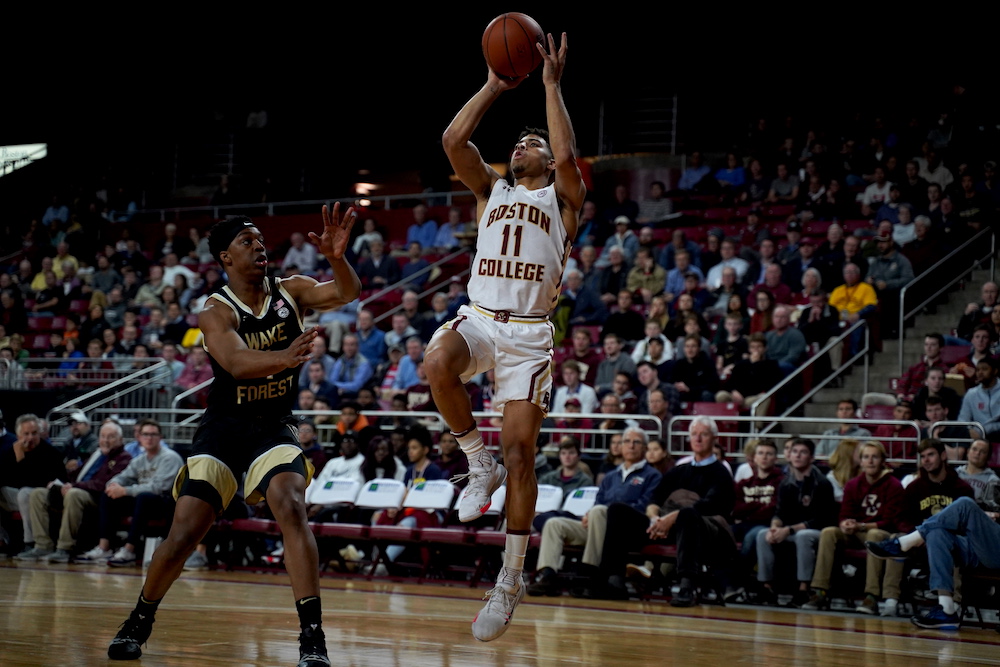 It’s the first week of November and a brand new season, and Boston College men’s basketball is off to an excellent start. Behind a dominant first-half performance, the Eagles staved off a late push to beat Wake Forest, 77-70—snagging a win in what was BC’s first-ever season opener against an ACC opponent.

The Eagles (1-0, 1-0 Atlantic Coast) are now in the win column and, more importantly, have their first ACC victory under their belt. With the departure of Ky Bowman to the Golden State Warriors, Jordan Chatman’s graduation, and the loss of Wynston Tabbs for the season due to injury, BC entered the 2019-20 season without three of their top four scorers from last year. Coming in to a year filled with so many unknowns and unfamiliar faces, it was unclear what to expect from this BC team. Here are some first impressions of the new-look Eagles:

Derryck Thornton is the Real Deal

It will be nearly impossible to replace Bowman, but head coach Jim Christian picked up an impressive replacement. The Eagles landed graduate transfer Derryck Thornton after spending the last two seasons at USC and one prior at Duke. He quietly averaged 7.7 points and 4.3 assists as a senior with the Trojans, and he came to BC looking for a new opportunity. The point guard showed out tonight and clearly has the potential to be a top player in the ACC.

Thornton poured in 23 points, shooting 50 percent from the field. His knack for driving to the basket and creating scoring opportunities allowed him to pace the Eagles’ offense. While he shot just 7-of-12 from the free throw line, his ability to get inside and draw contact was off the charts. One game doesn’t tell you everything—it’s obviously very early in the season—but Thornton looked like a top-notch point guard out on the court. He displayed tremendous confidence and poise in leading the offense, and his energy on defense was contagious. If he can turn this effort in night in and night out, look for Thornton to give teams fits as the season goes on.

Energetic Defensive Play, Along with Wake Forest Miscues, Jump-Starts BC

Once again, the Eagles may not be a great rebounding team. They played in a lot of smaller defensive sets, with the versatile Steffon Mitchell seeing a good amount of time at the five. But they made up for the lack of size with speed, intensity, and effort. BC won the turnover battle, 17-7, and scored plenty of points off Demon Deacon mistakes. Poor ball control on the part of Wake Forest allowed the Eagles to capitalize on hustle plays and dominate in transition—they totaled 18 points off turnovers and 10 fastbreak points. Success in these areas allowed BC to establish a commanding 15-point lead at the half.

Christian Utilized Three Freshmen in His Rotation, and They Impressed

It is a tall task for a freshman to have success in their first collegiate game, not to mention a conference game. The trio of Jay Heath, CJ Felder, and Julian Rishwain was up to the challenge. It was a little surprising to see so much youth implemented so quickly—partially the product of injuries—but they were ready for the moment.

Heath, a Washington, D.C. native, emerged, proving that he can step in as a legitimate scoring option alongside Thornton and senior Nik Popovic. Heath finished with 18 points, five rebounds, and four assists, showing off his athleticism on several acrobatic layups. Felder, an athletic big, stepped in and played some key reserve minutes for the Eagles—he contributed five points and five boards. Lastly, although it wasn’t very obvious on the stat sheet, Rishwain played a big role in his 16 minutes on the floor. Finishing with three steals, Rishwain was involved in multiple hustle plays that helped energize the team on a 9-0 run during the first half.

The same Mitchell from last season showed up tonight: extremely versatile, strong, tough, and quick—yet still lacking a real offensive game. A big question coming into the season would be whether Mitchell could improve his shot and develop into a more consistent offensive player. It’s only the first game, but it still seems as if he lacks the confidence to attack offensively. He finished with just one point on three shots, hesitating and passing up open looks numerous times throughout the game. Nevertheless, he was still one of the most important players on the court. His skill and strength on defense and on the glass stood out. He finished with one point, nine rebounds, four assists, two steals, and one block in 34 minutes.

All in all, it was a complete team effort in BC’s season-opening victory. As this young team moves forward during a new season, winning will require that kind of inspired performance each time it takes the court. The Eagles look to build on the solid start as they travel to face South Florida on Sunday.