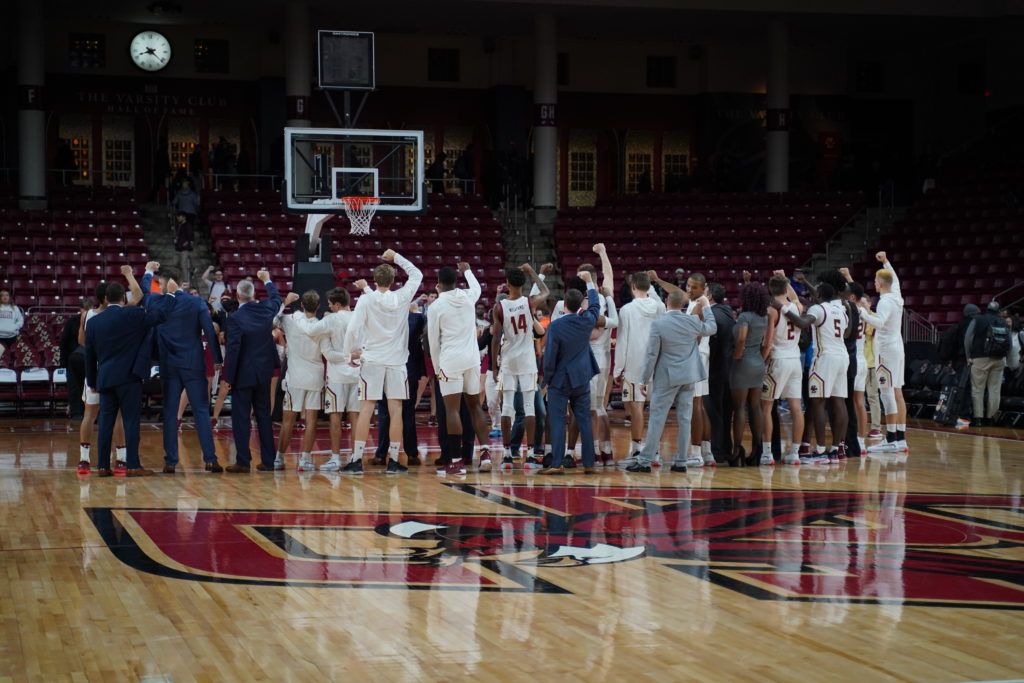 With a personal phone call to Boston College men’s basketball’s all-time leading scorer, Director of Athletics Martin Jarmond announced the jersey retirement of Troy Bell, BC ’03. The Eagles will retire his jersey on January 25 when the team takes on Virginia Tech, per BC Athletics.

“We are proud to honor Troy Bell’s career as a Boston College Eagle and hang his banner in the rafters at Conte Forum,” Jarmond said in the statement. “Troy was a dynamic player, prolific scorer finishing not only as BC’s all-time leading scorer, but the top scorer in all of college basketball during his four years on the Heights.”

Bell was recently immortalized in program history following his induction into BC’s Varsity Club Hall of Fame in 2017. Bell’s jersey will now be the eighth to be retired, soon to hang alongside the likes of Dana Barros, Bill Curley, Michael Adams, John Silk, Gerry Ward, Terry Driscoll, and John Bagely.

The retirement has been a long time coming, as the No. 16 draft pick led the Eagles in points all four years of his collegiate career and currently stands as the all-time program leader with 2,632 points. And, to add to that success, Bell was only the fourth player in program history to reach the 2,000-point mark, along with Barros, Curley, and Danya Abrams.

The point guard was a star from the moment he stepped on the court as a freshman, earning the title of Big East Rookie of the Year, all while scoring the most points (508) out of his veteran teammates. And, thankfully for the Eagles, Bell was not done there.

During his sophomore campaign, the Minnesota native continued his high scoring, racking up 652 more points on the season and earning Big East Player of the Year honors. He also made the All-Big East First Team while becoming a first consensus All-American. And while Bell would go on to earn second consensus All-American honors, he remains to be the only player in program history to receive the accolade, let alone twice.

It was also midway through his second season as an Eagle that Bell logged his 1,000th point—a mark that only 44 players in program history have reached. Bell also led the Eagles to their first NCAA Tournament appearance in four years.

Bell continued his exponential improvement in the 2001-02 season, jumping to a total of 691 points on the year. Amid the campaign, Bell helped lead BC to a second NCAA Tournament appearance in as many years, with the Eagles ultimately losing in the first round to Texas. Even though his junior season was not his best, shooting percentage-wise, Bell still was named to the All-Big East First Team for the second straight year, all while leading the Eagles in scoring.

But it was Bell’s senior season that really turned heads. He piled up 781 total points, netting 227 3-pointers, and blowing away all of his teammates in the scoring department. Not only did he finally tally his 2,000th point, but Bell also earned his second consensus All-American honor. Not to mention that Bell made the All-Big East First Team for the third year in a row, and was given his second career Big East Player of the Year award.

Bell’s collegiate career impressed scouts enough to land him with the Boston Celtics as the 16th overall pick in the 2003 NBA Draft. While he was quickly traded from the Celtics to the Memphis Grizzlies, it’s his contributions in his four seasons at BC that give him such prestige in Chestnut Hill.