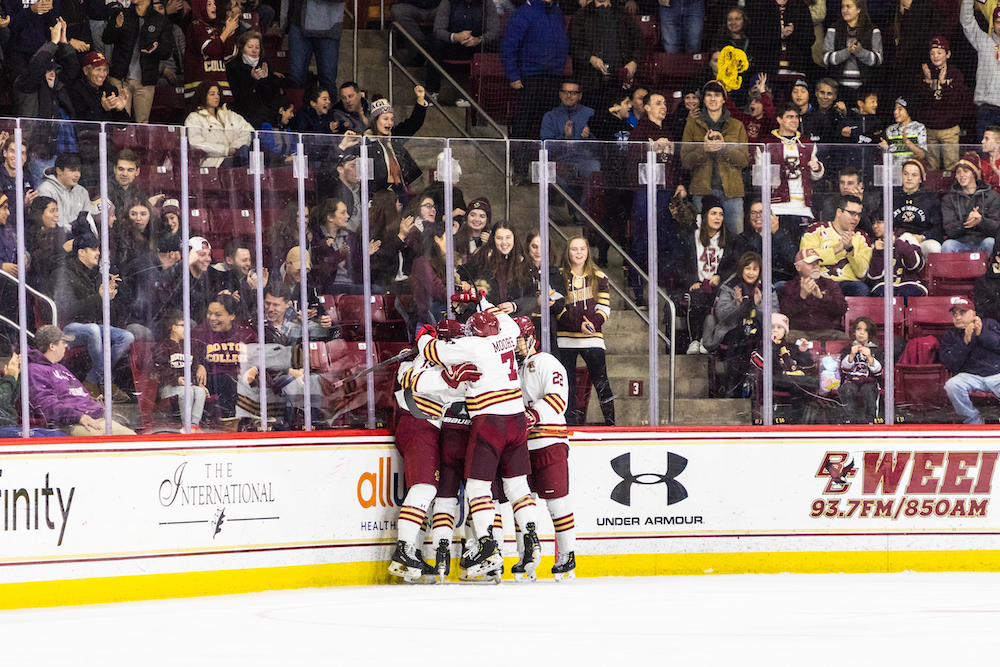 Roughly three minutes into the second period against Vermont, Boston College men’s hockey freshman Alex Newhook gained possession of the puck at the left post of the net. He slid it over to Julius Mattila, who sent a pass across the low slot at the other end for David Cotton. The ensuing one-time finish at the back door was enough to officially induct Cotton into the 100-career point club, as the senior became the 81st player in the program’s impressive history to reach the century mark.

Cotton’s goal was just the icing on the cake of a dominant effort from the Eagles, who struck in the first five minutes of each period en route to a 5-1 win over the Catamounts. BC (6-4-0, 4-2-0 Hockey East) was able to maintain a lead on its opponent for practically the entire night, handing the Catamounts (1-6-0, 0-4) their fourth conference loss in a row.

That same dominant energy from the captain was matched by the rest of his squad throughout all aspects of the game, as the matchup was characterized by consistently fast-paced play. Aside from the impressive scoreline, the physicality of the contest was another aspect of the game that the Eagles did not seem to fall short in. The combined 13 total penalties can prove testament to such, as back-and-forth hits were exchanged between the two squads throughout the majority of the Hockey East bout.

BC wasted no time in getting on the board to start the contest, as Mike Hardman’s strong defensive play resulted in a goal just two minutes into the first period. The freshman forward forced a turnover in the Catamounts’ zone, chipping the puck under the blocker of goaltender Stefanos Lekkas to give his team the early advantage that would catapult the Eagles past their opponent for the rest of the evening.

Cotton’s 100th point gave BC some breathing room, but UVM managed to respond just two and a half minutes later. Andrew Lucas’ rocket from the left point bounced off goaltender Spencer Knight’s pad and set up a perfect rebound for Joey Cipollone to capitalize––he picked up the loose puck in the low slot and shoved it past Knight’s left pad. Despite sending many other shots toward the Eagles’ goaltender, much credit for the win was given to Knight’s ability to stop virtually everything that came his way. He finished the night with 27 saves, giving him an astounding .962 save percentage in the past five games.

Midway through that same period, though, came a highlight-reel worthy Logan Hutsko dangle. Mattila delivered a perfect pass across the UVM blue line as Hutsko rushed down the left wing, which led to the junior making a move and finessing the puck right between Lekkas’ five-hole.

The third frame opened up in the same manner as the first, continuing the seemingly mistake-free night for BC. The high-flying Eagles came out strong, finding the back of the net just a minute and a half into play. Hardman skated through the left wing circle and snapped a pass to Newhook, who was able to redirect the feed on his backhand into the bottom left corner of the cage. That goal was enough to wrap things up for the Catamounts, as the team couldn’t seem to find any type of rhythm versus the Eagles’ stingy defense. A Jack McBain empty-netter sealed the blowout win for BC.

It was a dominant effort from the Eagles, who have completely flipped their season script. After a four-game losing streak, BC has bounced back and rattled off four straight conference wins, the last three of which haven’t been particularly close. The Eagles have outscored their opponents in that span by a decisive 19-4 mark. The winning streak has a strong chance of continuing, too, as they’ll play UVM again on Saturday night.