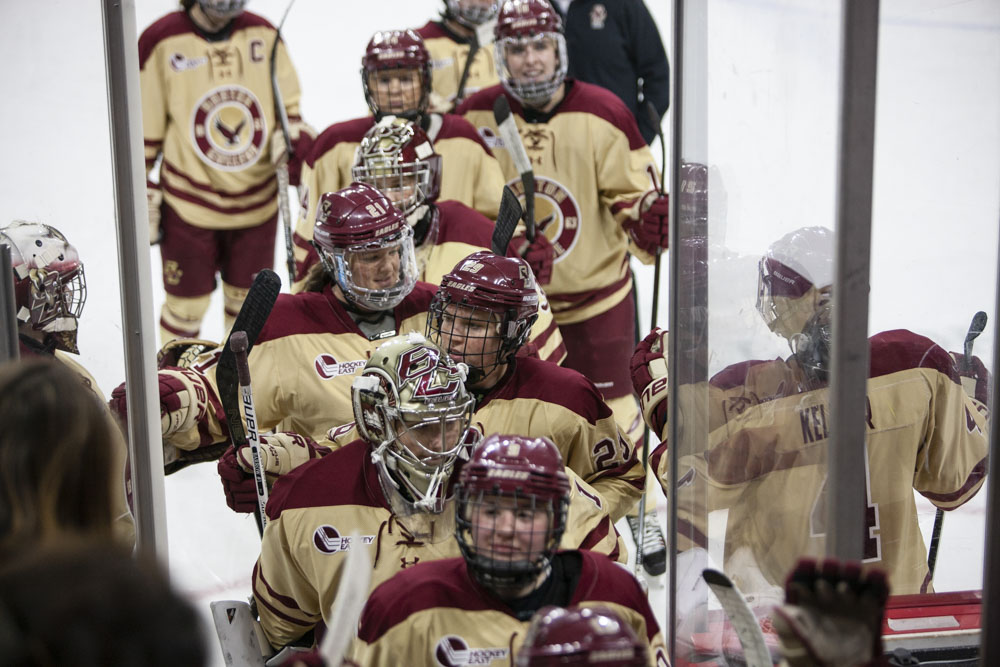 Coming off its first loss of the season at the hands of Connecticut, Boston College women’s hockey traveled down Commonwealth Avenue to rival Boston University in its latest Hockey East matchup. Seven of the last 10 meetings between the Green Line rivals have been decided by one goal or less, and Friday’s game was just as closely contested.

Even though they entered the third period trailing, 2-1, the No. 6 Eagles displayed plenty of resilience, using goals from Alexie Guay and Delaney Belinskas, as well as an empty-netter, to claim a 4-2 win over their rivals.

BC (10-1-1, 9-1-1 Hockey East) may have the fifth-ranked offense in the country, but BU (7-4-1, 3-4-1) came into the weekend with the nation’s fourth-ranked defense, and it showed. The first five minutes resembled that of a back-and-forth affair, and neither team could pull ahead. Despite the early deadlock, the Terriers were the first to draw blood. Kristina Schuler put home a wrister from the right circle at the five-minute mark, leaving the Eagles to play catch-up.

While BU was able to get ahead of BC early in the frame, the Eagles were able to break through their defense and settle into their zone. BC was given an advantage after Jesse Compher was sent into the box at the 14-minute mark following a heavy hit into the boards. The two minutes were put on the clock, but the play was then reviewed by the referees.

After the review, the call was changed to a five-minute major penalty. The Eagles are sixth in Hockey East on the power play and the extended penalty proved to pay dividends. After three minutes, BC was able to connect and tie up the game. While BU’s Corinne Schroeder made the initial save, Hannah Bilka was able to poke the rebound in from the circle while the junior was down, putting the Eagles on the board.

Throughout the second period, BC dominated possession of the puck, but Schroeder was steadfast in the goal, not allowing the puck past her. The Eagles had a nice opportunity when Olivia Finocchiaro got an open look from the slot, but Schroeder swiped it away as the game headed into a media timeout.

An Eagles player was sent to the box for the first time all evening when Lindsay Agnew was called for holding, and it cost them. At 13:57 in the second period, Schuler was able to fight through heavy traffic in front of McArthur and sneak the puck by her for the apparent score. Yet, while the light went off, no goal was given to BU—but after further review, the call was reversed and the Eagles were back playing catch up.

Less than a minute after the game returned to full strength, BC was back in the dog house after Kelly Browne was called for interference. A minute later, Alexie Guay headed to the box for checking, and the game was suddenly down to 5-on-3 play. BC rose to the challenge, though. With McArthur ready to meet every opportunity, the Eagles killed off both penalties.

Early in the third period, BC was gifted a chance to equalize when Courtney Correia was called for tripping. It took the team less than a minute to capitalize on the special teams opportunity. Guay fired a rocket from the blue line that whipped past multiple defensemen. A delayed reaction from Schroeder showed that she couldn’t see the puck, and it was to the Eagles’ favor.

Coming off its power play, BC went right back on the man advantage following an Alex Allan checking penalty. Despite spending the entire two minutes in BU’s zone, the Eagles couldn’t connect on their second consecutive power play.

It was soon clear that the Eagles didn’t need the advantage to get ahead. With 12 minutes left in the game, Belinskas picked up a pass from Maegan Beres and sent it past Schroeder to put the Eagles on top for the first time of the night. After a review by the referees, the goal stood, and BC led the Terriers going into the final 10 minutes of the game.

The back-to-back goals by the Eagles added a sense of urgency to the game, and BC was caught in the fire. Jillian Fey was called for checking, and the Eagles were back on the penalty kill. Although the Terriers launched multiple shots in the direction of McArthur, BC came out unscathed and kept its lead alive.

With just under three minutes left in the frame, Cayla Barnes was sent to the box for interference, BC’s fifth penalty of the evening. The Terriers pulled Schroeder for a two-player advantage with just over a minute to go in the penalty. Despite the added pressure, McArthur was ready. Then, as she came out of the box, Barnes picked up the puck, and fired a one-timer into BU’s empty net, redeeming herself for her prior penalty.

The Terriers came in having won back-to-back games—while BC was fresh off its shocking first loss of the year—and even led through 40 minutes, but that wasn’t enough against their visitors. The Eagles battled back, and behind three different goal scorers, took the first of four matchups with their crosstown rivals this season.