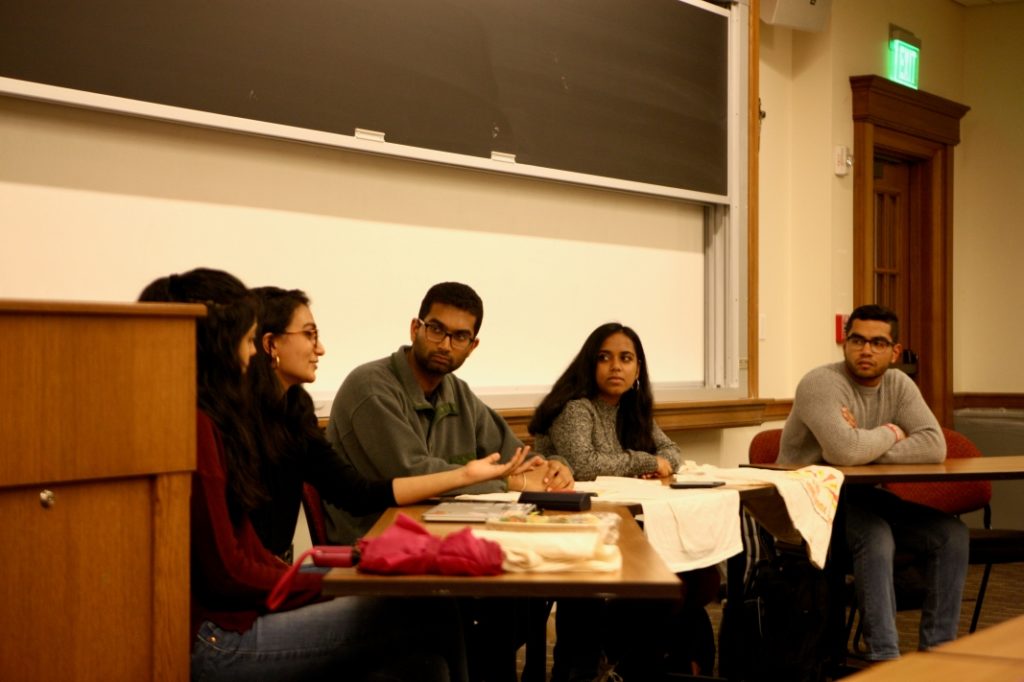 In honor of Love Your Body Week, the South Asian Student Association (SASA) hosted a panel on Nov. 5 to discuss the issues surrounding body image within South Asian culture. Their discussion touched on the difficulty of navigating the differences between the students’ home lives and their American college social lives.

The first introduced topic was colorism. Nahar took the lead on this question by describing her family’s reaction to a change in her complexion after her summer service trip to Jamaica. Upon seeing her family members, some of whom she had not seen in years, she was shocked by their first remarks, she recalled.

“Instead of a single person asking me how my trip was, almost every person commented on how dark I was,” Nahar said.

She expressed how upset she was that she couldn’t share her experience in Jamaica since everyone’s primary focus was on the color of her skin.

Sundaresan also commented on colorism in Indian pop culture, specifically the casting of lighter-skinned main actors and actresses. Actresses with darker skin are almost always relegated to low-status roles, such as maids, according to Sundaresan.

Addressing the next topic, which was fatphobia within the South Asian community, Sundaresan described a situation similar to Nahar’s experience with colorism, in which she found everyone commenting on her weight gain.

Mohapatra spoke up on this topic as well, describing how arguments within his family often silence overweight people’s voices. He said that even the expert opinions of these family members were often ignored due to the extreme fatphobia within South Asian culture.

“People will take overweight people less seriously in comparison to someone who is more normal in their weight,” said Mohapatra.

Dixit said that before family gatherings, he and his brother feel immense pressure to out-exercise their family members. As they have grown to expect back-handed comments from relatives, Dixit and his cousins feel the need to force themselves to meet family members’ standards, he said.

“I think it extends even beyond first impressions, at least in my family,” Dixit said. “It’s just such a terrible view of your body.”

The women on the panel gave insight on perception of body types within South Asian culture. Rihjawani said that curves are not seen as attractive and noted that traditional clothing often covers up much of women’s bodies. Rihjawani’s disappointment in the fact that her culture did not celebrate women’s bodies was evident.

“I think it ties in to how much your worth is defined in South Asian culture based on your physical appearance and all these assumptions people will instantly make of you,” Rihjawani said.