Mike Posner Searches for Meaning in ‘Live Before I Die’ Video

The start of Mike Posner’s music video for his new single “Live Before I Die” doesn’t feature flashy sports cars, wild parties, or bottles of expensive champagne. The video begins with a simple message from the artist. White typeface illuminates the black screen, interspersed with short cuts of Posner and his enormous beard, smiling playfully at the camera. The text reads, “My name is Mike Posner. In 2019, I set out to walk across America. I started in the Atlantic Ocean. Why? I walked to become someone I’m actually proud of. LIFE IS NOW.”

Singer, songwriter, and poet Mike Posner chronicles his journey of self-discovery in his video, beginning in Asbury Park, N.J., and ending six months and over two thousand miles later in Venice Beach, Calif. Early in Posner’s career, following the success of his single “Cooler Than Me,” he struggled to find his identity amid his newfound fame. His battles with drug abuse and living the high life are detailed in his acoustic, confessional ballad “I Took a Pill in Ibiza,” made an international hit by a remix by production duo Seeb. Fortunately, with his newest video, Posner seems to have gotten a renewed lease on life and a true purpose for living it.

The video itself features footage of Posner walking alone through the many landscapes of America, from farmland to desert, the changes illustrating his personal growth. But, halfway through the video, Posner is shown being hospitalized for a rattlesnake bite, unsure if he’ll be able to finish the journey. Nevertheless, he perseveres and overcomes the challenge. He keeps going.

The song itself complements the wholesome tone of the video, with an uplifting, melodic house beat supplied by English producer Naughty Boy. Posner spills confessional lyrics over the beat, singing, “I stopped smoking weed a year ago / Maybe I’m less cool now I don’t know / But I talk to pretty girls now instead of sitting there all stoned / I stopped smoking weed a year ago.” While some may feel Posner’s lyrics are cliché and lack depth, the earnestness behind them is tangible, and the simplicity works to strengthen the fundamental messages of perseverance and self-discovery found in the video. Fittingly, Posner ends the video with two powerful words: KEEP GOING.” 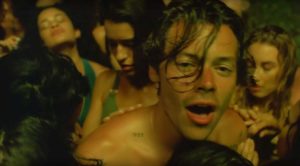