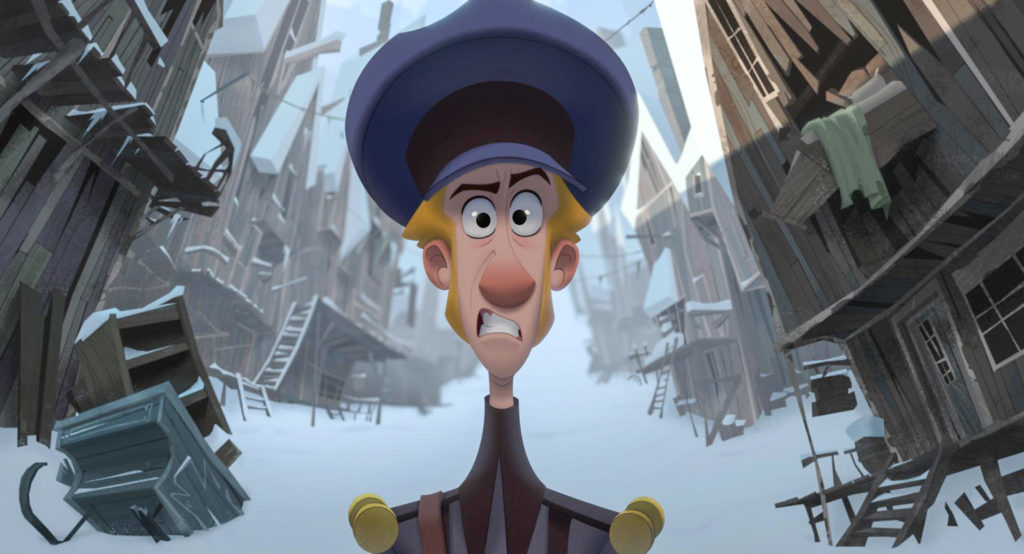 An updated version of Santa Claus’ origin story, the beautifully animated Klaus not only provides heartwarming explanations backstories for beloved Christmas traditions, but also raises the standard for streaming exclusive films in the future.

Jesper (Jason Schwartzman), a poorly performing trainee at the Postal Academy, gets a rude awakening when his father, a highly-ranked postman at the Academy, sends him off to a remote post office in Smeerensburg with the goal of mailing 6,000 letters in one year. When Jesper moves to Smeerensburg, he discovers that the town is riddled with hatred, and struggles to get even one letter mailed until, by pure coincidence, a picture drawn by a local boy lands in front of a reclusive toymaker, Mr. Klaus (J. K. Simmons). Other children find out about the boy’s new toy and rush to the post office to mail letters to Mr. Klaus in the hopes of receiving toys for themselves.

Klaus tackles a challenge similar to the classic Christmas movie Santa Claus is Comin’ to Town: to teach kids how Santa came to be. Klaus takes the story in a much more modern and realistic direction in that all of its characters have flaws. In many traditional Christmas movies, nearly all of the heroes are morally pure characters who don’t deserve the hardships they endure. Klaus does away with this expectation, giving nearly every character in the story a flaw. Jesper is selfish. The local school teacher turned fishmonger, Alva (Rashida Jones), would rather make enough money to leave than teach the kids. Klaus has been a social recluse for years. Director Sergio Pablos finds a way for the characters to develop over the course of the film, not only improving themselves, but also building the story of Santa Claus along the way.

The movie doesn’t work too hard to incorporate all of the elements of the classic Santa Claus story, and it doesn’t need to. Many Christmas traditions, like mailing a letter to Santa, magical reindeer flying around the world, and entering houses through the chimney all have plausible explanations in Klaus.

The magical aspect of Santa Claus isn’t necessary to these explanations, either: The story waits as long as possible to integrate magic into Mr. Klaus and Jesper’s journey, making it all the more relatable for families watching at home. The use of magic is foreshadowed through the movie, but leaving the most obvious use of Christmas magic until late in the film allows the characters to do most of the heavy lifting.

Pablos’ directorial debut exceeded all expectations for animated Christmas films. Pablos is the creator of the Despicable Me franchise, so success is no stranger to him. Having worked as an animator and screenwriter on successful projects before Klaus, Pablos had a lot going for him. Taking on the role of director served his career, and the audience, well, showing that he can excel at all aspects of the filmmaking process.

Netflix took a step in the right direction with the release of Klaus. For a streaming service seemingly more focused on quantity over quality, Klaus, among other films, shows the depth of storytelling possible, thanks to Netflix’s massive budget. Adding more movies to its catalogue with Klaus’s high level of animation and character development confirms that the streaming service is a necessity for just about everyone, and give it an edge, as Disney and NBC unveil their streaming services. Klaus’ superiority in quality over many other Netflix originals resets the streaming service’s bar while cementing its status as a must-see holiday movie.