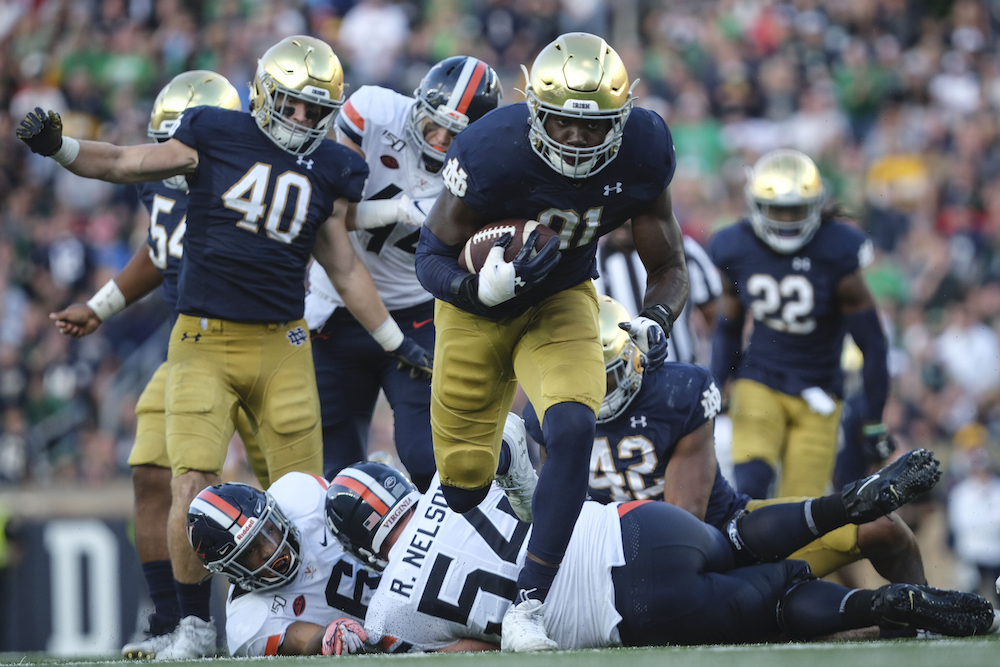 Boston College football had a chance to clinch bowl eligibility two weekends ago against Florida State and enter this Saturday’s matchup against No. 15 Notre Dame with a 6-4 record, a bye week of preparation, and a momentous two-game win streak.

Instead, the Eagles suffered a disappointing 38-31 loss, and are back at .500 with an uphill battle to a sixth bowl game in seven years under head coach Steve Addazio. Now, the tenured coach—who spent three years at the turn of the century as an assistant coach with the Irish—will attempt to revive a rivalry in which Notre Dame has taken the last six meetings.

“I’m going to do some other things as the week goes on to try to make sure they understand the intensity of this game and what it means,” Addazio said in his weekly press conference on Monday. “You still are playing a national team, and they get that too—that this is still a grand stage—and if you’re a competitor, you’re playing a top-15 team on a grand stage, that’s what you want to do.”

The Irish have rattled off three straight victories, beating Virginia Tech, Duke, and No. 23 Navy—winning the last one by a decisive 52-20 margin. Notre Dame has found another gear as of late, leaving the memory of a 31-point loss to then-No. 19 Michigan in the rear view mirror. By ESPN’s FPI, the Irish have the 27th-best offense and seventh-best defense, giving them a healthy 92.9 percent chance to beat the Eagles on Saturday.

“This is a very talented team,” Addazio said. “Certainly played at a high level last week against a really good Navy team and capitalized in every phase. So they’re playing with great confidence. They’re playing at home. It will be a great challenge for us, but our guys are so excited for this challenge.”

Addazio and the Eagles will have the difficulty of playing at Notre Dame Stadium, which has been nothing but hostile to opposing teams. The Irish are 6-0 at home this year and have won 17 straight, dating back to Sept. 9, 2017 when No. 2 Georgia handed them a one-point loss. BC will be attempting to end a pair of streaks—its six-game skid against Notre Dame and the Irish’s lengthy home-winning stretch—and it won’t be easy.

Defensively, the Eagles will have to deal with a balanced offense that hit its stride against the Midshipmen last week. Notre Dame racked up 52 points, with starting quarterback Ian Book going 14-of-20 for 284 yards and five scores before being replaced in the third quarter. Tight end Chase Claypool was his preferred target, hauling in a school-record four touchdowns and totaling 117 yards on seven catches.

“They’ve got a receiving corps that has got size and tremendous athleticism and speed and a veteran running back, an outstanding offensive line, and a quarterback that I think is extremely mobile, throws great deep ball, and looks like he has total command of their offense,” Addazio said. “So I’m very, very impressed with Notre Dame on offense and their personnel.”

Deep receiving corps and a strong offensive line could pose all sorts of problems for the Eagles and their secondary. In the last three games, opposing quarterbacks have completed 69.4 percent of their passes for 1,007 yards, nine touchdowns, and zero interceptions. BC has been picked apart, having allowed 7.7 yards per play during that stretch. Book, Claypool, and running back Tony Jones Jr. will be difficult for the Eagles to contain—Notre Dame is averaging 36 points and 420 yards per game.

It doesn’t help that the Irish defense is even better than their offense. Notre Dame has a two-deep full of playmakers, as the Irish are often able to make opponents offense’s one-dimensional. They boast the fifth-best passing defense in the country, having managed eight interceptions while allowing just 11 passing touchdowns. Notre Dame does give up almost 170 rushing yards per game, but ultimately hold opponents to just 19.3 points.

“They play great team defense,” Addazio said. “I mean, when you freeze the film upon contact of tackling a back, there’s nine, 10, 11 hats at the ball. They rip off the blocks, and they pursue to the ball as good as I’ve seen to the very end.”

The group has several standouts who Addazio pointed to in his presser. He described defensive tackle Myron Tagovailoa-Amosa as a “very active, explosive player,” safety Alohi Gilman as “excellent,” and linebacker Asmar Bilal as someone he was very impressed with. Other standouts include ballhawking freshman Kyle Hamilton (three interceptions), linebacker Drew White (leading tackler), and lineman Julian Okwara (five sacks).

The balance that the Irish have will be a lot to contend with, as the Eagles currently boast a high-scoring offense but have been facing a plethora of issues on the other side of the ball all season. BC is giving up too many points and yards per game to keep Notre Dame within reach on defense, so if the offense stagnates at all, this could quickly turn into a similar outcome as the Clemson game. Two teams that are headed in different directions are going to meet in South Bend, and Addazio seems to be hoping that the intensity of the “Holy War” is enough for his side to overcome a 20-point spread.