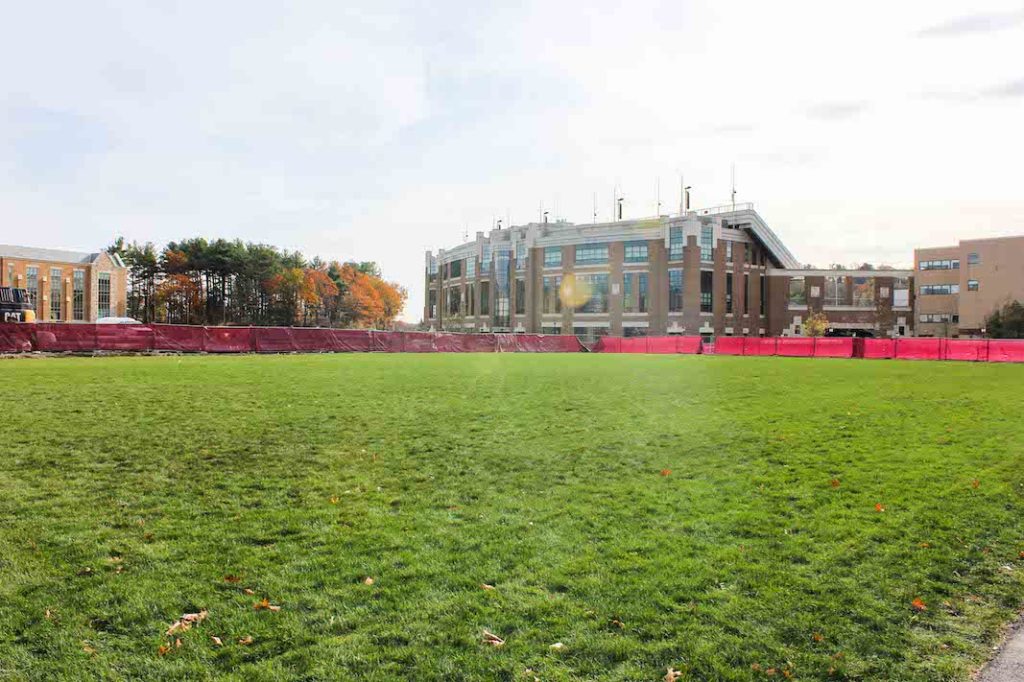 Boston College is transforming the area previously occupied by the Flynn Recreation Complex into a large green lawn, with pedestrian pathways, three tennis courts, and one basketball court, along with a newly designed parking space.

These additions are intended as a temporary use for the site, as BC plans to eventually construct a University Center in this area, according to an emailed statement from Mary Nardone, associate vice president for Capital Projects Management.

The new space will “help tremendously to provide a softer and greener landscape,” as the University has been lacking in big green spaces, especially on Lower Campus, Nardone said. The parking and recreational courts will be located closer to the Margot Connell Recreation Center.

“The footprint of the old Flynn [Plex] was large—three acres—so this amount of open space will give some great open space,” she said.

Nardone said that BC decided to use the space in this way to replace the courts that previously were in this general location. She added that it was time for BC to upgrade the surfaces of these courts anyway.

The construction project also consists of improvements that aren’t visible to the naked eye. BC is installing a large stormwater detention system underneath a portion of the site, which it hopes will alleviate the chronic flooding near the Yawkey Athletics Center that occurs during intense rainstorms, according to Nardone.

On-site construction will be very limited with winter approaching, as the snow will get in the way of construction progress. BC hopes for construction to start back up in March and for the project to be completed in June 2020.

Other than the impending weather, the project has faced few challenges, especially since the demolition of the Plex last summer went very smoothly, according to Nardone.

BC has taken many steps toward redesigning Lower Campus in recent months. The University completed construction on the Margot Connell Recreation Complex and the Pine Tree Preserve over the summer. The preserve features new landscapes with pedestrian walkways, sitting areas, and park benches, all of which are open to the general public.