Home » Book, Irish Score 34 Unanswered Points in Blowout of BC 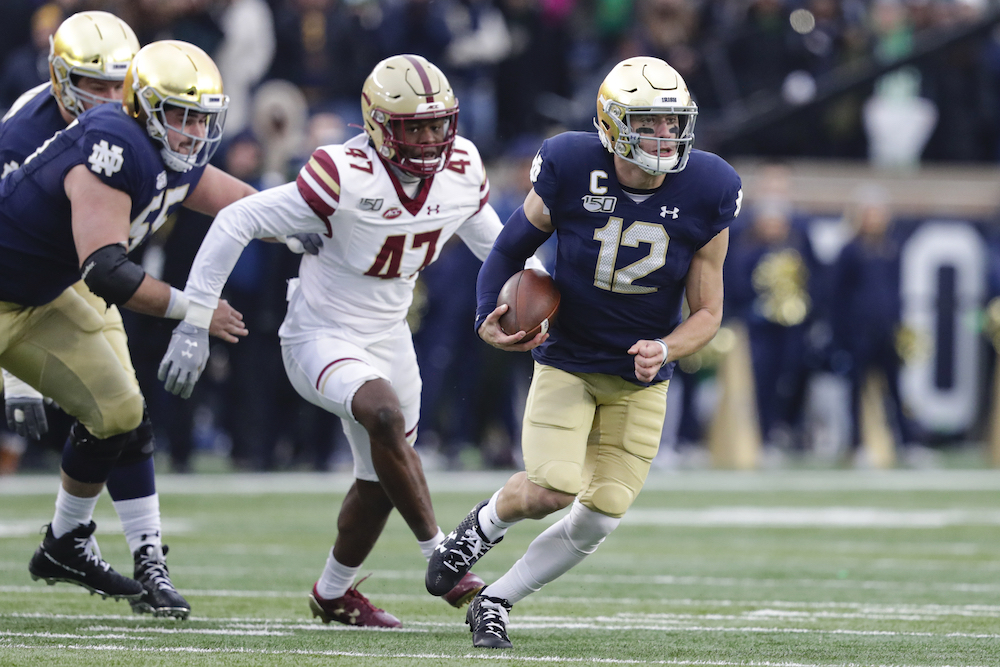 Book, Irish Score 34 Unanswered Points in Blowout of BC

Boston College football needed to score on its first drive of the second quarter of Saturday afternoon’s game with No. 15 Notre Dame. The team’s much-maligned defense had been on the field for almost 12 of the first 15 minutes—the product of a pair of three-and-outs from the Eagles—but had dug in and held the Irish to a pair of field goals.

BC’s offense stepped up, going on a 16-play, 84-yard drive that was capped by a six-yard rushing touchdown for quarterback Dennis Grosel on a bootleg. It gave the Eagles a 7-6 lead and hope that the offense could rise to the same level that the defense was playing at.

From there, though, the Notre Dame defense made things extremely difficult, and BC’s defense could only maintain its high level for so long. Behind the play of quarterback Ian Book, the Irish patiently found the cracks in the Eagles’ defense, ultimately scoring 34 unanswered points in what became a 40-7 blowout victory.

Book was 26-of-40 for 239 yards and three touchdowns, with Chase Claypool, Cole Kmet, and Chris Finke all hauling in seven catches and a score. Notre Dame (9-2) piled up 501 yards of offense and had a healthy edge in time of possession, holding the ball for 35 minutes to the Eagles’ 25 and running 21 more plays. BC (5-6, 3-4 Atlantic Coast) only trailed by nine points at halftime, but it was clear that Notre Dame was gearing up to pull away in the second half, and it had the game all but locked up in the third quarter.

The Eagles were unable to establish the run, managing just three yards per carry on 43 attempts. AJ Dillon took 14 carries for 56 yards, both season lows, and backfield mate David Bailey could only generate 26 yards on 10 carries. Grosel was the most effective runner, scrambling for 66 yards, but only as a result of constant pressure. He went just 9-of-20 in the air for 63 yards and was sacked four times—a stunningly high number as BC entered having allowed just six in the previous 10 games combined.

The Irish answered Grosel’s early touchdown—the only score of the day for the Eagles—with a methodical 15-play, 75-yard drive. BC’s secondary was doing a good job of keeping receivers in front of them, and the team used a plethora of blitz packages to get pressure on Book, but he calmly delivered and eventually found Claypool for a six-yard score.

The Eagles had just under three minutes till halftime to try to find an answer, but they ended up punting after Adetokunbo Ogundeji sacked Grosel on third down. It didn’t seem as though the Irish were going to be able to get into field-goal range, but a costly pass interference penalty on Eagles cornerback Jahmin Muse gifted Notre Dame 15 yards. That infraction set up a 45-yard field goal from Jonathan Doerer, who impressed throughout as he went 4-for-4 on the day.

Coming out of halftime, the Eagles trailed 16-7, the product of a strong defensive effort. They continued to play well by forcing a punt on Notre Dame’s first drive, but things quickly got out of control. After a quick three-and-out from BC, the Irish got another field goal from Doerer, who hit a 37-yarder.

On the Eagles’ next drive, Grosel kept the ball on an option run, and a trio of Irish defenders spun him around. Khalid Kareem poked it out, and teammate Drew White scooped up the fumble, after which Notre Dame’s offense wasted no time in marching down the field. The Irish entered fifth in the country in points off turnovers, and Book added to that total with an 11-yard touchdown pass to a wide-open Kmet.

BC punted yet again—one of eight times during the game for Grant Carlson—and the Irish needed just one play to add to the blowout. Former high school track star Braden Lenzy took a reverse handoff and was off to the races, flying up the left sideline for a 61-yard touchdown. It hadn’t been too long ago that the Eagles were in a close two-possession game, but Lenzy’s score—reflective of the season as a whole—stretched the lead to 26 and further erased any chance of a comeback.

The Irish capped off the dominant victory in style. True freshman standout Kyle Hamilton read Grosel’s eyes perfectly and picked off a pass, taking it to the 12-yard line. Three plays later, Book displayed his elusiveness, scrambling about the pocket and evading would-be tacklers for almost six seconds before connecting with Finke in the back of the end zone for a six-yard score. The final 11-plus minutes were dreary, with the Irish working through their depth chart while BC turned it over on downs and then punted.

The 33-point defeat is the second largest loss for the Eagles in the 26 times that they’ve met their rival, only surpassed by the 1992 meeting in which Notre Dame came away with a 54-7 victory. The game followed a predictable path—as soon as it was clear that the running game wouldn’t be able to do anything against the Irish, the offense was doomed to fail. Then, it was fair to assume that the defense wasn’t going to be able to keep coming up with late stops against Notre Dame—especially given that the Eagles entered on average allowing almost 500 yards of offense and 30-plus points per game. In the end, it was a predictable defeat, but one that stings for BC fans nonetheless as a sub-.500 season looms, and head coach Steve Addazio saw his record against ranked opponents slip to 1-17.