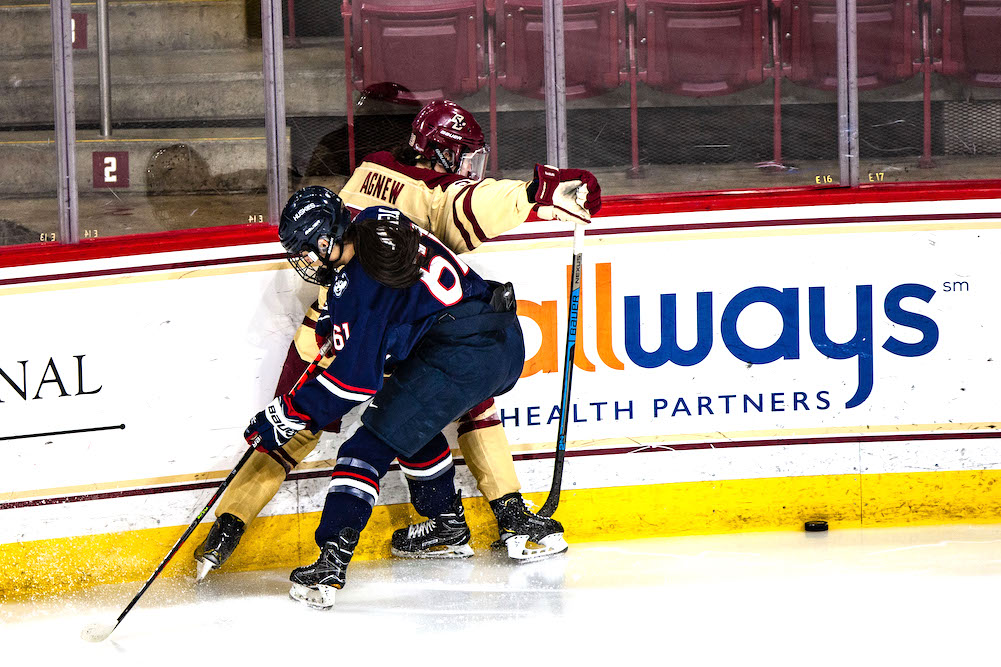 Offense has been a major strength all season long for Boston College women’s hockey, who entered Friday scoring a prolific 3.8 goals per contest. Despite its consistent efficiency, though, the offense couldn’t capitalize in its previous game, a 3-0 shutout loss to No. 4 Northeastern last Tuesday. The Eagles’ talented forwards couldn’t bounce back on Friday afternoon, either, as the team suffered its second straight loss in a 2-1 defeat at the hands of Connecticut.

UConn handed BC its first loss of the season two weeks ago, so the Eagles (10-3-1, 9-3-1 Hockey East) came out hungry and outplayed the Huskies (8-4-1, 5-2-1) in the initial minutes of Friday’s game. They generated significant offensive pressure in the period, as they pinned the Huskies in their own zone with the use of a strong forecheck.

The Eagles opened the scoring about 11 minutes into the period on a power play after UConn’s Amy Landry went to the box for tripping. BC was quick to capitalize, as forward Savannah Norcross received a great pass from her linemate Kelly Browne right in front of the net, and the sophomore rocketed a shot past UConn goalie Morgan Fisher. Is was the seventh goal of the season for Norcross, who has become a key piece of BC’s offense this season. Freshman defenseman Alexie Guay was also credited with an assist on the goal.

Starting for the first time since Oct. 20, Eagles goalie Kelly Pickreign had a phenomenal first period.  She stopped all nine of the shots she faced, denying several point-blank chances from UConn to keep her team ahead going into the first intermission.

The second period opened up very differently than the first. The Huskies tied the game up just over two minutes into the frame. A wrist shot from the point by defender Emily Reid passed through traffic and behind Pickreign to even the score at one. But Pickreign responded well, making some crucial saves following the goal.

In the second half of the period, the Eagles could not seem to stay out of the penalty box, which proved dangerous throughout the game. As a team, they took three penalties in a span of four minutes, giving the Huskies too much time with the man advantage.

“That seems to be our Achilles heel,” said Crowley. “We get caught in the penalty box a little bit too much. It just takes a toll sometimes on the players that are penalty killing. So we’ve got to do better at that and continue to be better at that. We continue to talk about it, but it is something that we definitely need to change.”

Despite many chances, the Huskies were simply unable to capitalize while one man up. The Eagles finished a perfect 5-for-5 on the penalty kill this afternoon, an area of their game that they have drastically improved throughout the season.

In the final minute of the second period, Huskies forward Viki Harkness beat Pickreign on a breakaway opportunity, but it ricocheted off the pipe. The shot off the post kept the score tied at one going into the final intermission.

UConn finally took the lead just over six minutes into the final period. Forward Briana Colangelo received a great pass from linemate Natalie Snodgrass, and she was able to beat Pickreign on the backhand to give her team the final 2-1 advantage.

Following the goal, the Huskies were magnificent defensively, blocking several of the Eagles’ passes and shots. Fisher denied every chance, standing tall for UConn, and finished the day with 38 saves.

The Eagles gained a power play one last time with about seven minutes to go, but it was short-lived.  Eagles captain Erin Connolly took her second penalty of the day to negate the advantage. On the ensuing 4-on-4 play, BC’s leading goal scorer Hannah Bilka had a strong wrist shot saved by Fisher. Despite having 11 goals and nine assists this season, the talented freshman has had a slow last three games, tallying no points in that time.

As time wound down, the Huskies were saved by the pipe as Eagles’ defenseman Hadley Hamertz rang a wrist shot off the post. BC pulled its goalie in the final minutes to gain an extra attacker, but it never managed the crucial equalizer.

It was another surprising loss for a team the Eagles have historically fared well against. BC will be looking to end its offensive struggles and avoid a sweep at the hands of UConn when it heads to Connecticut Saturday afternoon to take on the Huskies in the second game of a home-and-home series.