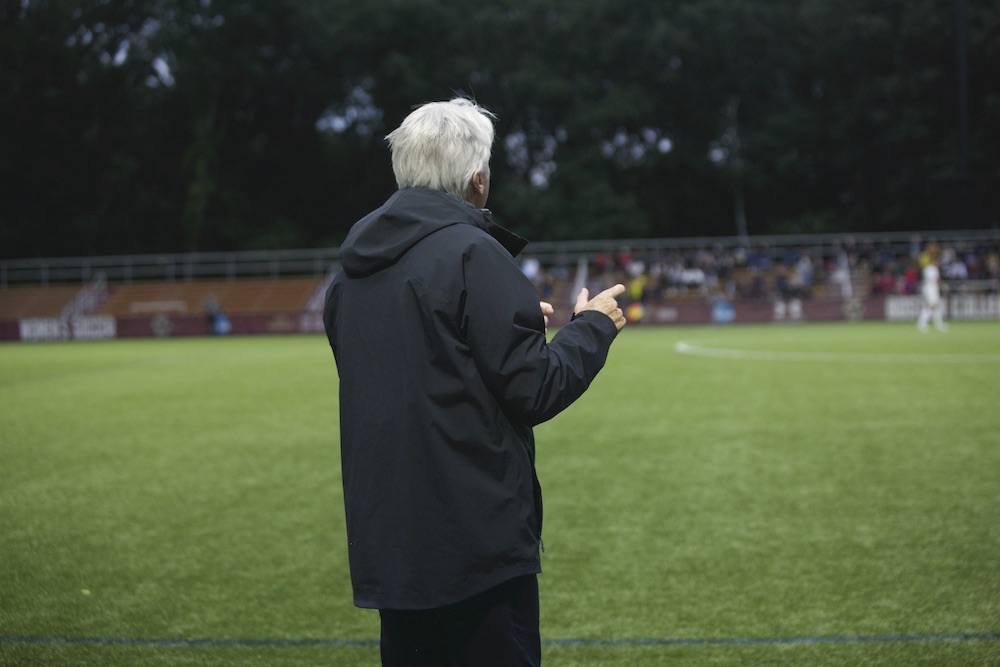 After 32 Spectacular Years at the Helm, Ed Kelly Retires as Head Soccer Coach

Not long after Boston College men’s soccer fell to Washington in a heartbreaking loss in the second round of the NCAA tournament, head coach Ed Kelly announced his retirement from coaching, per BC Athletics. Kelly’s name is one that has become synonymous with BC men’s soccer over the past 32 years.

Long before he began his coaching career at BC, Kelly was an Irish-born soccer prodigy, trying to break his way into the professional athletics in the United States. In an 2016 interview with The Heights, Kelly described his rocky path to professional soccer, which included trying to immigrate to the United States during the Vietnam War.

After living in the United States briefly, Kelly returned to Ireland, only to once again come back to realize his original goal of playing with the U.S. National Team. He trained with German coach Manfred Schellscheidt, who helped propel him into a spot on the USMNT. Kelly represented the United States five times in international play before transferring over to a coaching career.

In a twist of fate, a former coach of Kelly’s asked him for a favor in covering a tournament that he couldn’t attend. Kelly accepted, and he ended up leading the team to a tournament victory. Shortly after, Fairleigh Dickinson University offered him a permanent assistant coaching position.

In 1985, Kelly received another offer from Seton Hall University, where he remained as head coach until 1988—when he became the head coach at Boston College. After just one year in New Jersey, Kelly transformed Seton Hall from a “Big East cellar-dweller” to a top competitor in the nation. He gained national attention for his coaching prowess, and he had barely begun.

When he arrived at BC, Kelly replaced former head coach Benjamin Brewster, who had been with the program intermittently for 12 years. Brewster completed his tenure with a 112-88-31 record, a great accomplishment that Kelly vastly overshadowed in the years that followed.

“To leave with the most wins in school history and conference championships in the Big East and ACC, Ed’s place in our soccer history is cemented,” said athletic director Martin Jarmond, per BC Athletics.

Kelly did what few NCAA soccer coaches could—he amassed over 325 wins in his tenure as a coach, 289 of those wins coming during his time on the Heights. His total record with the Eagles, 289-239-67, boasts the most victories in program history, a title that he has held since his 13th season at BC.

“I am very proud of what I have accomplished on the field during my career, but my biggest joy was helping the many student-athletes who have come into my life,” Kelly said regarding his term with the Eagles, per BC Athletics.

Kelly not only holds the title for most wins by a coach in program history, but the 2002 men’s soccer team also set the program record for most wins in a single season (18) under Kelly’s direction. Of course, Kelly’s accomplishments did not go unnoticed.

Earning 10 Coach of the Year awards and three titles spread across two different conferences, Kelly’s name is all over the coaches’ honor roll section of the record books. Kelly also coached BC men’s soccer to 13 separate NCAA Tournament appearances, including four Sweet 16 berths and two trips to the Elite 8. And in 2007, the Eagles won both the ACC regular season title and the ACC Championship, earning the No. 1 ranking nationwide and an ACC Coach of the Year title for Kelly.

Thanks to Kelly, Boston College men’s soccer is a force to be reckoned with year after year. Kelly is a once-in-a-lifetime kind of coach, but the team—and the Boston College community—will surely feel his impact for years to come.

“I’ve often wondered if I would recognize when it was time to retire. That day has arrived and it is time to step aside to give an opportunity to someone else,” said Kelly to BC Athletics. “Hopefully another Eagle who understands what a special place the Heights is and who will lead the program to continued success.”