Beck Doesn’t Quite Reach the Stars on ‘Hyperspace’

Beck Hansen has pushed the boundaries of the alternative genre and mixed and matched sounds throughout his career. Ever since his breakout album Mellow Gold in 1994, an effort that mixed angsty alternative rock with hip-hop rhythms and rapping, Beck has continued to evolve and change his sound. Odelay saw him pair folksy indie rock twang with funky hip-hop rhythms, while just a few years later he delivered sparse, heartbroken ballads on Sea Change. His last album, 2017’s Colors, consisted of upbeat indie jams and sunny choruses.

Beck’s newest album, Hyperspace, revisits some of the synth-pop tendencies found on Colors, yet to different effect. His new project features spacey, moody synths and executive production from Pharrell Williams that lends his sound a polished, shiny finish absent from Beck’s earlier work. The massive, swirling soundscapes of this project bring to mind Tame Impala’s Currents, and the echoey guitar strumming wouldn’t be out of place on a Mac DeMarco album. Despite drawing from a wide range of influences, Beck’s incisive, clever songwriting, like always, allows his own identity to shine through.

Previously released single “Saw Lightning” is an impressive blend of genres and sounds, making it the commercial and critical highlight of the album. It opens with a few twangy strums and vocal runs before Beck’s signature husky baritone comes in singing, “There was a day, saw lightning.” The unexpected opening of the song foreshadows the unconventional nature of the album as a whole.

The sound grows larger and larger, reaching expansive choruses pulsing with synths and powerful bass lines. Beck raps in semi-coherent gibberish at one point while in the bridge he sings in a falsetto, “Lord’s gonna take me and leave me in the light.” It is an entirely unconventional song that somehow, like much of Beck’s efforts, works.

Other highlights include the ballad “Die Waiting” with Sky Ferreira and the heartfelt “See Through,” aided by the songwriting chops of hit producer Greg Kurstin. “Die Waiting” features the simple yet effective chorus of “I don’t care what I have to do / Know that I’m gonna wait on you.” The uplifting vocal melodies and shiny, gorgeous synths make the chorus seem almost like an interstellar lullaby, the euphoric mood continuing into the following track, “Chemical.”

“See Through” is one of the highlights of the album. Its suave lyrics and tone evoke a futuristic nightlife scene. Beck opens the track softly singing, “Summertime nights, I’m gonna run to meet you / Coming out of my life, you know I’m trying to reach you.” By the end of the song, however, the glitz and glam of this technological utopia has worn off, revealing the narrator’s insecurities, with Beck repeating, “I feel so ugly when you see through me.”

Despite the emotion evident on these tracks, the synth-pop, atmospheric production fails Beck on much of the project, making his lyrics robotic and emotionless. Especially toward the end of the album, where tracks such as “Stratosphere,” “Dark Place,” and “Star” rely on futuristic tropes of outer space and the cosmos and do little to anchor them to any relatable human experience. “Star” indulges in some cheap metaphors, with Beck singing, “She’s got the light in her eyes / And the blue from the sky / She’s crossin’ my mind / Better hold onto myself.”

Elsewhere on the album, Beck’s efforts to showcase his lyrical talent fall flat. On “Chemical,” he sings on the last verse, “Shock to the system / Infatuation / Shake like a flower / Strange affirmation.” The lyrics themselves are complex and insightful, yet when paired with a forgetful melody and Beck’s husky tone, they ultimately don’t accomplish much. Oftentimes on Hyperspace, Beck’s lyrics seem better on paper than in practice.

Beck may not quite hit the mark with this album, but his attempt at combining futuristic synth-pop with his songwriting abilities still makes for an interesting collection of songs. His career has taken many twists and turns, some more successful than others. Ultimately what has defined Beck as an artist is not his knowledge of one singular craft, but his willingness and courage in dabbling in many genres and sounds. Beck is a jack of all trades, master of none. 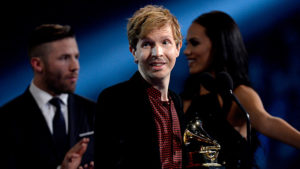