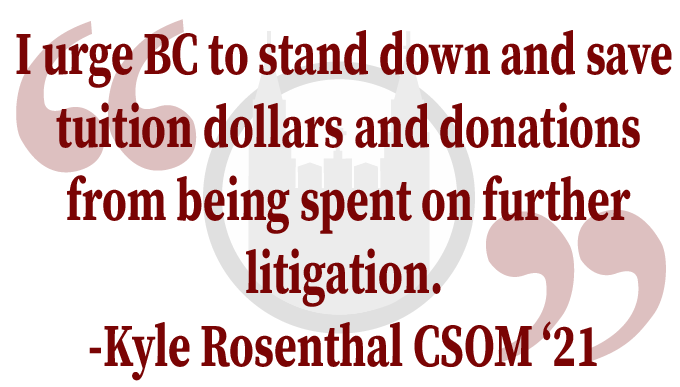 It is already quite difficult to speak out against my own school regarding Webster Woods, especially when I want to see it expand and do well, but to see its response in a recent Newton Tab article, among others, I knew that I had to respond.

Jack Dunn mentioned Boston College’s respect for students’ passion for sustainability, yet BC has orchestrated a continued pattern of disrespect toward the natural environment and the voices of students. It is a disturbing attitude and trend as an institution, particularly a Jesuit one.

He went on to mention aspects of the proposal that students need to consider, along with the gravity of eminent domain action. I am insulted by the implication, as I have spent over a year engaged on this issue, reading hundreds of pages of proposals, studies, and legal documents, in addition to meeting with various stakeholders—and I do not take what I am doing lightly.

I don’t demand an apology, but I demand respect. I don’t take pleasure in speaking out against BC, but it seems that BC has no problem speaking against students.

BC has given many reasons in defense of keeping the woods, but not a single one acknowledges environmental impacts. BC is telling residents to be afraid of costly litigation when BC is the one who can stop it all.

They have released statements that dismiss the intelligence and credibility of myself, fellow students, and even the mayor.

While a few BC administrators are able to use their full time job to lobby, I take five classes, study for exams, write papers, and work two jobs all before I am able to focus on the protection of the woods.

I receive no compensation for spending my Monday night at a committee hearing. I could spend that time being an average college student, yet I have been forced to stand up for justice where adults have failed. I say this only to convey my intentions.

I have been emailed by residents of Newton who feel intimidated and threatened by letters and calls from BC.

I wish I could fully support them because, as humans, they deserve compassion and someone from BC at least listening to their concerns. I regret that I and other students have been forced to take on this role.

I hope that BC administrators honestly ask themselves why I and other students are spending so much time fighting to protect the woods. We love BC and want to see it thrive, and we take action because we honestly believe that the best thing for all parties is the preservation of the woods. We don’t do it out of spite. We do it because it is right.

I urge BC to stand down and save tuition dollars and donations from being spent on further litigation. Any higher price it may be able to squeeze from Newton will be wiped out in legal fees, and further action will only continue to alienate us from our city and neighbors.

Together, we can build a better Boston College and Newton. Let’s start by protecting Webster Woods.