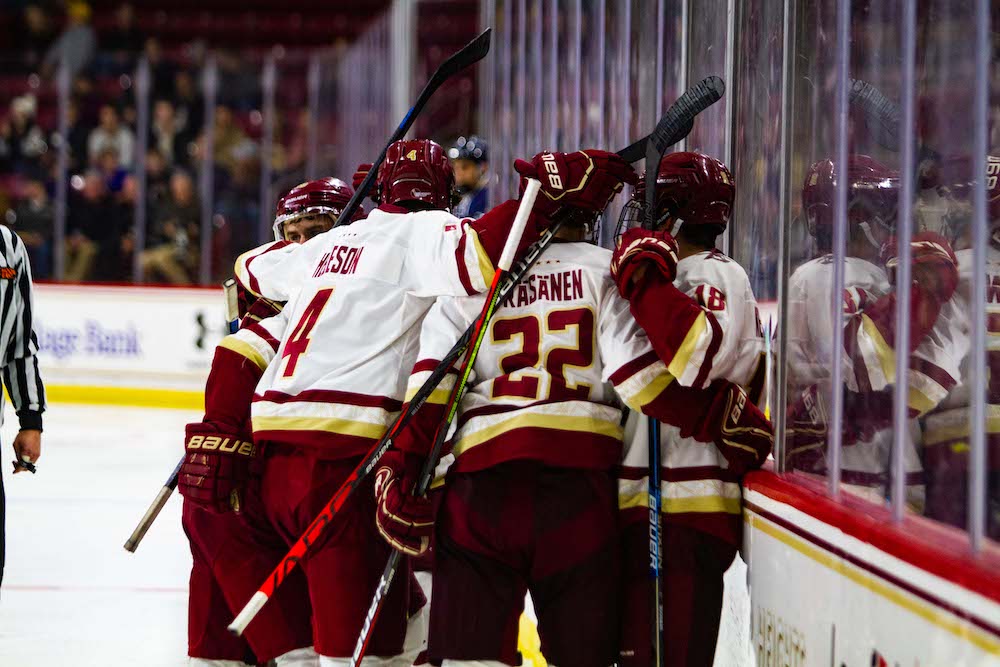 Momentum, momentum, momentum––that seems to be the root of Boston College men’s hockey’s recent success. The manner by which the Eagles put points on the board can serve as a testament, as each and every time their fast-paced offense finds the back of the net, the next goal is sure to come just a couple minutes later.

Looking at its past five matchups alone, BC has seen two pucks find the net within five minutes of each other a whopping seven different times. Tuesday night’s matchup against Yale (2-7, 2-6 ECAC) stuck to that script, as BC (8-4-0, 5-2-0 Hockey East) extended its winning streak to an impressive six-game stretch.

The fast-paced Eagles offense started things off by following that same recipe for success. Two quick strikes in the first period, coming less than a minute and a half from each other, ultimately laid the foundation for what later became an impressive victory with a final score of 6-2.

Less than halfway through the first period, Marc McLaughlin’s leaping screen in front of Yale goaltender Nicholas MacNab allowed for Ben Finkelstein to fire a wrister just past MacNab’s glove. BC tallied another goal less than two minutes afterward––Matt Boldy dropped a backhanded pass off to Marshall Warren, who snapped a shot past MacNab’s low blocker.

Yale fought hard to stay in the game, as Tyler Welsh located a loose puck near the right side of the crease and buried it past Spencer Knight.

Leave it to none other than Aapeli Räsänen to restore the Eagles’ two-goal lead––his rocket of a shot in the opponent’s slot just barely made its way through MacNab’s pads and trickled right across the goal line. Räsänen finished the night with a goal and two assists, as his recent dominant play has been a major factor in BC’s success throughout the past six contests.

The fact that defensemen produced two of the opening BC strikes displays the balanced scoring effort that persisted throughout the entire night. Six different players found the back of the net, with Alex Newhook, Logan Hutsko, and Räsänen capping the night off with multi-point efforts.

“This is the first time I’ve been able to say this for a while—I’m pleased with the way all four lines are playing right now,” said head coach Jerry York. Coming from a coach that has been at BC since 1994, those words speak volumes.

The second frame of play saw the pace of the scoring slow down a bit. In an effort to shake things up for his team, Yale head coach Keith Allain decided to replace MacNab with senior goaltender Corbin Kaczperski. That effort proved to be quite futile, as he went on to allow just as many pucks past him as MacNab.

Still, BC wanted to extend its lead, as Mike Hardman capitalized on a Räsänen shot that bounced off Kaczperski’s pads and perfectly into his forehanded stick, leading to a quick strike inside the left post roughly six minutes into the period.

The final 20 minutes of play opened up with a sign of life from the Bulldogs, as their powerplay unit generated a score to bring them back within two. Welsh sent a cross-ice pass to Justin Pearson on the right wing circle, and Pearson roofed a shot past Knight’s right shoulder.

Even so, his attempted spark did not bring any flame to the Bulldogs, as that shot would be the last time they found the back of the net for the rest of the night. Barring a total yet highly unlikely collapse from the Eagles, the game seemed to be tucked away shortly thereafter.

Hutsko responded just three minutes later, as his nifty curl around a Yale defender in the bottom corner led to a quick shot into the top shelf of the right post. York half-jokingly suggested during the postgame press conference that someone “submit that one to SportsCenter Top 10.”

After Yale’s Hayden Rowan committed what seemed to be a frustration-fueled holding penalty, Hutsko took advantage and sent a pass across the Bulldogs’ zone to Julius Mattila, who in turn ripped a net-shaking one-timer past Kaczperski’s glove.

All things considered, the Eagles shouldn’t get caught celebrating too long, as their next three contests include the unbeaten, No. 6 Harvard Crimson and a series with Notre Dame.

“Looking at the next three games, those are [two] of the top teams in the country without a question,” said York. “Now we’re really going to be tested.”