Mariel Brings a Bite of Cuba to Boston

Chicken and two sides gets a makeover at Mariel, a downtown restaurant with flair inspired by Cuban cuisine. Located in Post Office Square in the Financial District, Mariel is one of four restaurants owned by COJE Management group, with Tom Berry as the culinary director creating dishes that are elegant, yet shareable plates of traditional Cuban fare.

The interior of the restaurant fully embraces its Cuban theme by mixing architectural styles such as faded colonial and rustic Baroque to mimic the meshing of cultures and structures that exist in Cuba. The music is upbeat but encourages conversation. Murals around the bar add pops of color to the mainly cream and faded robin’s egg blue color scheme. The main dining room consists of soaring ceilings with elegant chandeliers that provide warm mood lighting and transport its patrons to the Cuban past.

The food and drinks, however, are Mariel’s main avenue to paradise. The drink menu consists of cocktails, mojitos, and daiquiris that blend the famous Havana Club rum with tropical flavors, such as the Pineapple Daiquiri. Another cocktail that draws on Cuban heritage is the Cigar, which consists of rye, homemade coffee liquor, nonino (a blend of herbs), and dark cocoa to give the drink its dark color and flavor. The cocktails and daiquiris typically range from $13 to $17 and the more traditional beers fall in the range of $7 to $9.

The menu begins with bocaditos, or snacks that serve as appetizers. Two appetizers were the perfect amount for two people, and the waiters were attuned from the beginning to suggest dishes that would be fitting for dietary accommodations. I ordered the avocado con Mojo, a verdant and zesty dip much like guacamole, with sweet potato chips that complemented the fresh flavors perfectly with its combination of sweet and salty flavors. The chicken tots served as the duly needed, fresh alternative to chicken and two sides. The chicken was molded into crunchy, yet juicy cubes that, when dipped in the spicy caribee mayo, seems to melt in your mouth.

As for the main dishes, they come on small yet shareable plates, so guests can share a delicious Cuban experience as well as a conversation. The blackened shrimp was a delicate contrast between sweet and spicy, with starfruit taking the sting out of the ñam ñam sauce. Another dish, and a delicious take on chicken, was the pollo pizza, with the rich flavors of the adobo chicken lightened by the sweetness of pineapple and caramelized onions on a golden brown crust. The costs for the smaller plates are in the $14 to $18 range. But the large plates for large groups of people, such as the cod or steak fritas, cost in the $80 to $110 range, ensuring flexibility for groups of all sizes.

The dessert menu was plentiful, with options for coffee, tea, coffee-flavored cocktails—including the Havana Speedball—and dessert wines as well. The dessert options played with coffee, coconut, chocolate, and fruit flavors. The ice cream ensalada intertwined the deep, luscious flavors of the dark chocolate sorbet with the sour orange sherbert, balancing expertly between too sweet and too bitter. The rainbow colored ice cream sandwich was an elevated version of the nostalgia-riddled treat, bringing the bright flavors of guava, passion-papaya and mint together in between rich chocolate cake to transport you back to balmy childhood summers or maybe, just away from the cold Boston winters.

At the end of the meal, Mariel provides postcards to be sent anywhere throughout the world as an homage to its location in Post Office Square. A meal at Mariel provides a little vacation. So if the chicken and two sides becomes too monotonous, the winter too long, and the summer too far away, travel to Mariel to escape to Cuba.

Featured Images by Rebecca Speer / For The Heights 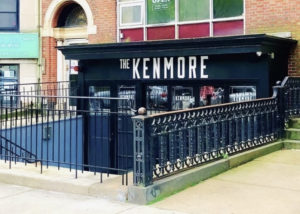