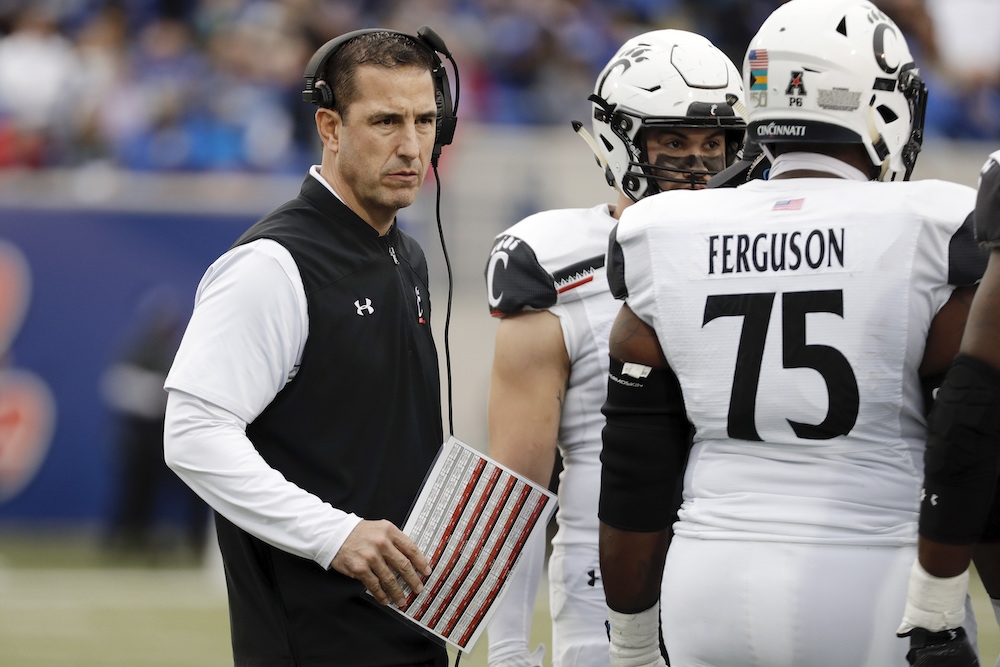 Whenever a college football head coach is fired, people everywhere start throwing names out for potential successors. Up-and-coming coordinators, former players, high-profile hires, you name it. That has proved to be the case after Boston College football head coach Steve Addazio was fired on Sunday afternoon, ending a seven-year tenure that featured six bowl games and a 44-44 record. Director of Athletics Martin Jarmond held a press conference with interim head coach and former wide receivers coach Rich Gunnell on Monday morning, and noted that he hopes to name a successor before the start of the early signing period on Dec. 18.

With that in mind, here’s a quick look at four coaches that the likes of The Boston Globe’s Julian Benbow, The Athletic’s Bruce Feldman, and Yahoo! Sports’ Pete Thamel have all identified as potential targets for Jarmond in his highest-profile hiring to date.

This would arguably be the biggest hire, but don’t get your hopes up. Fickell guided the No. 20 Bearcats to a 10-2 record and first-place finish in the American Athletic Conference this season, and that was a year after earning AAC Coach of the Year honors. Fickell spent the previous 14 years at Ohio State, even briefly serving as head coach for a year before Urban Meyer arrived. The connection with Jarmond is obvious, as BC’s Director of Athletics came over from Ohio State, but Fickell seems content in Cincinnati.

“I don’t know that there is a better place than Cincinnati,” Fickell said in a press conference recently with rumors swirling, per Cincinnati.com.

Why it works: Fickell has proven he can quickly create contenders, leading a 4-8 Cincinnati side to back-to-back double-digit win seasons. He’s a talented defensive coach, with the Bearcats ranking 26th in scoring defense this year and eighth last season, which would be a welcome addition to the Eagles.

Why it doesn’t: Fickell is likely holding out for a more prolific job. Last offseason, West Virginia and Louisville came knocking according to reports, but Fickell didn’t end up biting. He met with the Mountaineers and was interested but didn’t follow through. His stock is very much on the rise and he doesn’t need to leave the comfort of Ohio to keep it growing.

Elko was born and raised in New Jersey and has worked his way up the collegiate ranks to the point of a potential head coaching opportunity. He’s coached in the ACC, helping engineer an impressive Wake Forest defense—that marked the culmination of 12 years spent under Demon Deacons’ head coach Dave Clawson in a variety of places—and spent a year at Notre Dame before heading to College Station. The Aggies are 34th in total defense this season and 27th in ESPN’s defensive efficiency.

Why it works: New Jersey is a recruiting hotbed for BC, and Elko’s familiarity there would help. He was a potential target last year for Temple but ended up being one of the highest-paid assistants in college football. Like Fickell, his ability to coach a strong defense would be a big addition to BC, which has rapidly gotten away from its former defensive-minded roots.

Why it doesn’t: In a manner similar to Fickell, he seems pretty content in Texas. Before this season, he was asked why he came back, and he said, per Saturday Down South, “This place is special and I think making the decision to come down here, making the decision to stay—I think everything in that regard has kind of backed that up.” Does he really want to come back to the Northeast for the first time since his stint at Hofstra in the mid-2000s, or will he just keep plugging away on defense at bigger football schools?

Vegas named Washington, a 35-year-old assistant coach with the Buckeyes, as the odds-on favorite to win the BC job. The connections are obvious: Washington was a defensive tackle with the Eagles from 2002 to 2005, spent four seasons as an assistant coach with BC, then moved on to position coaching roles with Cincinnati, Michigan, and Ohio State. The Buckeyes and Ryan Day hired him away from their rivals because of his familiarity with Ohio (as a Columbus native) and his rise through the college football ranks.

Why it works: His familiarity with BC, both as a player and a coach, is an excellent starting point. He’d be able to arrive in Chestnut Hill and feel right at home, and alumni would undoubtedly be excited to have a former player and assistant take over. He’s a positional unit coach on the nation’s No. 2 defense, and Day, a Coach of the Year frontrunner, obviously has a lot of admiration for him. While Washington might be young, he’s made his rounds as an assistant, meaning that he’s fostered relationships in the coaching world that could be used to build a staff.

Why it doesn’t: There’s several reasons—he’s in his mid-30s and would immediately become one of the youngest head coaches in college football, which isn’t necessarily a good thing. He also hasn’t risen to a coordinator role, which would benefit him ahead of taking on the larger role as a head coach. BC is looking for a new, fresh face, but someone with experience at a higher role might be more suitable.

Hafley brings an awful lot to the table. Not only are the Buckeyes the second-best defense in the country this year, but he has a mountain of experience—both professionally and collegiately—and is a prolific recruiter. 247Sports ranked him third in the country for recruiting in the Class of 2020, and that ranking happened despite the fact that he had spent the last six years in the NFL as a secondary coach with a variety of teams. He spent four years in the ACC with Pittsburgh before jumping to the pros.

Why it works: Halfley is five years older than Washington and brings his prolific recruiting ability and strong defensive experience. He’s a New Jersey native, too, so he could make a dent in that pipeline and bring some of the best local talent into BC.

Why it doesn’t: Under Meyer, Ohio State wanted assistants to stay for two years, and that’s something Day wants too. He’s a finalist for a national assistant of the year award, and it wouldn’t be surprising if he stuck around with Day. It also seems like Hafley is destined for a return to the pros in a larger role than a secondary coach, and spending time at Ohio State will only expedite that process.