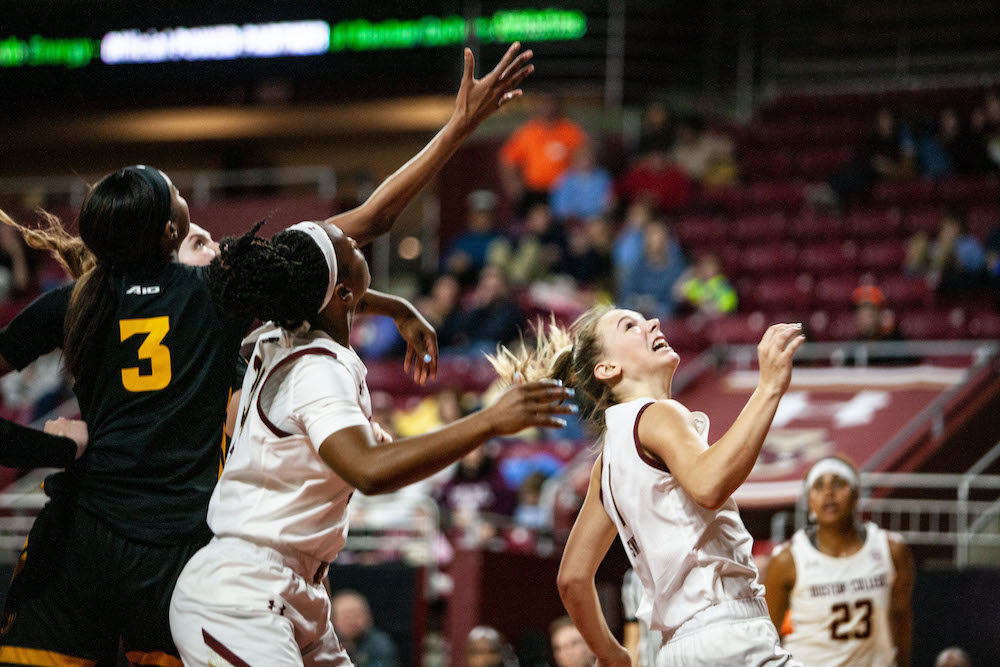 Boston College women’s basketball came up just short against a Northwestern team receiving votes in the national polls on Thursday night, and self-inflicted wounds will have the Eagles rueing what could have been a statement win.

BC committed 21 turnovers to the Wildcats’ six, including one while trailing by three with 12 seconds left, and Northwestern iced a 66-63 victory with free throws.

The Eagles (5-4), fresh off a 13-point victory over Tulane almost a week ago, hung with the Big Ten-leading Wildcats (6-1) throughout. The game was tied five times and featured seven lead changes, but the biggest difference came in miscues, with Northwestern holding a decisive 14-4 edge in points off turnovers.

BC built a five-point lead midway through the second quarter, but the host Wildcats rallied to take it back and never trailed from there. The Eagles kept pace throughout the second half and even outscored Northwestern, 33-32, in the final 20 minutes but continued a trend of alternating wins and losses.

The Wildcats’ guard Lindsay Pulliam poured in 25 points on 10-of-16 shooting from the field, while sixth man Byrdy Galernik chipped in 13 points off the bench. Northwestern had no answer in the rebound battle, losing by a decisive 53-29 margin, but made its way to the line for nearly twice as many attempts as the Eagles and shot 15-of-22.

BC was led by Milan Bolden-Morris, with the junior sharpshooter connecting on four 3-pointers in a 14-point performance. The Eagles crashed the boards well in totaling 24 second chance points, with Emma Guy turning in 13 points and five rebounds while Cam Swartz added 11 points and seven boards.

The first quarter set the tone for the rest of the game, with the teams trading buckets throughout. The Wildcats built their biggest lead six minutes in, going on a 5-0 run to break a tie behind jumpers from Pulliam and Sydney Wood, the latter tacking on a free throw after a Makayla Dickens foul. BC rallied behind layups from Guy and Taylor Soule, who totaled 10 rebounds, but Pulliam buried a 3-pointer with four seconds left in the quarter to stretch the lead to four.

Out of the intermission, both teams struggled offensively. A Galernik layup were the only two points in the first two minutes, but then the Eagles woke up. Marnelle Garraud had a layup then Bolden-Morris—who subbed in at the eight-minute mark—sank a jumper and a 3-pointer to give BC a lead. The Eagles only built on it with consecutive layups from Georgia Pineau to take a 25-20 edge, but Northwestern would find an answer. Abi Scheid and Pulliam both buried 3-pointers to quickly return the lead to the Wildcats’ bench, then another tie was broken when back-to-back Bolden-Morris turnovers were turned into layups for Galernik.

Up four into the third quarter, Northwestern padded its lead to seven with free throws from Abbie Wolf and another Pulliam jumper. BC kept it close throughout the period, though, with a Dickens’ 3-pointer bringing the deficit back to just two. The Wildcats stretched it back to five points heading into the fourth, but it was clear that it was anyone’s game.

Northwestern again stretched its lead to seven points in the first three minutes of the fourth, but BC showed impressive resolve in cutting back into the deficit. A Bolden-Morris 3-pointer cut it to three, then Soule scored on the Eagles’ next possession to cut it to 57-56. Northwestern returned it to a four-point edge, but Swartz hit a big 3-pointer to make it a one-point game yet again. Swartz would hit another jumper with 47 seconds left to make it a three-point deficit and BC had the ball with 37 seconds left, but eventually Garraud turned it over and Northwestern hung on.

It was a tough loss, because if BC had been able to protect the ball just a little bit better, it likely would’ve won. The Eagles checked almost all the boxes—they had more rebounds, more second chance points, more points in the paint, more 3-pointers, and a higher field goal percentage. But, the minus-15 mark in the turnover department kept BC from getting into a good offensive rhythm and as a result, handed it a difficult road loss.

Still, the ability to keep up with the Wildcats was promising, as they entered with a lone loss by two points against the No. 16 team in the nation, DePaul. The Eagles have shown flashes of potential this year but have been plagued by inconsistency, and that’ll be a key focus ahead of their conference opener on Sunday.