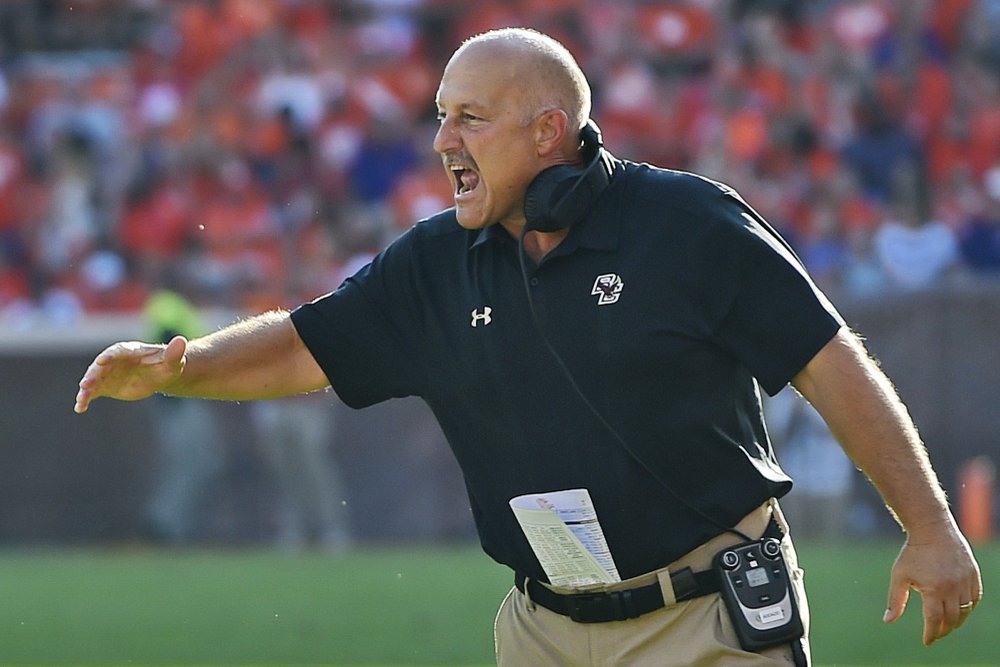 With the departure of head coach Steve Addazio after seven years at the helm, Boston College football is on the hunt for a new frontman. It’ll be the biggest hire of Director of Athletics Martin Jarmond’s tenure thus far, and the former Ohio State assistant athletic director is undoubtedly facing a lot of pressure to get this one “right.” Vegas oddsmakers have already started weighing the chances of a few top candidates, Twitter is obsessed with flight tracking, and BC fans everywhere are discussing just who they want to replace the much maligned Addazio.

As a keen observer of one season of Addazio’s “run-run-pass” offense and record-setting defense—in the bad way—I’ve known it was time for a change. It’s a program-defining decision, though, as the Eagles have reached a plateau in terms of yearly success.

As Addazio departs, it would be to BC’s benefit to look for potential new hires who can engineer a drastic turnaround, not just build on the parts of Addazio’s game plan that were successful. The Eagles need a young face: one who brings a fresh energy and has the potential to stick around for a long time. They need a recruiter who can bring top high-school players who can hopefully transition seamlessly to college ball. Most importantly, BC needs a coach who can balance offense and defense. Under Addazio’s leadership, BC struggled to bring the two sides of the game in harmony with each other. In fact, offensive and defensive success had an inverse relationship during Addazio’s tenure. Any year the Eagles had a great defense, their offense fell apart, and vice versa, so it’s imperative that the next coach can strike a balance between the two.

With rumors swirling around potential head coaches, each has his own benefits and drawbacks, which I’ll try to explore here. This list is not exhaustive, nor is it based on any official releases from Jarmond or BC Athletics.

Addazio departs with a perfectly mediocre record of 44-44 over seven seasons, including a 3-9 2015 campaign that was marked by a spectacular defense and a less-than-spectacular offense. The Eagles struggled on the offensive side of the ball, ranking 121st out of 125 D1 teams in scoring and tallying just 17.2 points per game that year.

The 2015 campaign’s saving grace—although not in the win column—was defensive coordinator Don Brown and his wizardry against opposing offenses. But, after the 3-9 season, Brown headed to Michigan the next year. Brown now finds himself in the rumor mill for the head coach spot at BC after proving himself as a top recruiter and a capable defensive coordinator for the Wolverines.

Since Brown’s departure, the Eagles have never truly found a defensive rhythm, particularly in this past season, which created the potential need for a head coach more focused on that side of the ball. This season alone, BC set two program records for offensive yards allowed—the first against Louisville with 664 and the second against Clemson with 674. Putting Brown in charge could help tighten up the Eagles’ defense, which would help to balance out BC’s offense-heavy 2019 team.

At 68, Brown is the oldest of the potential candidates, which could spell trouble for a program looking for someone to breathe new life into it. In addition, oddsmakers raise the question of why Brown would want to return to the Heights after leaving an unsuccessful BC program just three years ago to take a higher profile job at Michigan.

Another problem that Brown could help solve would be BC’s recruiting struggles. BC is ranked just 51st nationally and ninth in the conference in terms of recruiting for the class of 2020, which makes winning conference games consistently difficult—it’s hard to have to lean almost exclusively on the development of lesser-known recruits. Brown is known by his peers as an elite recruiter, which is a beacon of hope for the Eagles. Even so, he might not be the best choice. There are several other intriguing candidates who have had their names brought up.

Luke Fickell, born and raised in Ohio, is the current head coach at Cincinnati. Fickell, a former linebacker at Ohio State, spent the first part of his career alongside Jarmond as an assistant coach for the Buckeyes from 2002 to 2016 before moving to Cincinnati. In his first season with the Buckeyes, his team went a perfect 14-0, largely supported by a defense that ranked second in the country by total team defense. Fickell’s defense allowed just over 300 yards per game, substantially below BC’s 2019 mark of 480 yards.

Another benefit to adding Fickell to the coaching staff would be his ability to reach the Midwest for recruits, specifically Ohio. Ohio is a state that BC has scooped up some key recruits from—starting quarterback Dennis Grosel, for instance—but it largely hasn’t been able to land any big names from the fifth-most talented state in terms of high-school football. Fickell could create a new Midwest-heavy recruiting class, which could help the Eagles move up in the recruiting rankings. Fickell is still young at 46 and has a long career ahead of him, which could encourage more recruits to stick around the program for all four years.

The possible hiring of Fickell faces some drawbacks as well, though. He has spent both his playing and coaching careers focusing on defense, and placing him as the head coach for BC may create the need for a new offensive coordinator as well to counter-balance his strength on defense. This year, Cincinnati finished the season low in offensive proficiency at No. 57 by points per game but high in the defensive rankings, coming in at No. 24 in points allowed. This trend appears opposite to BC’s patterns from the last few years under Addazio. In addition, as Fickell is an Ohio man through and through, it may be hard to convince him to move from a successful hometown team that was ranked twice in the AP poll over the last two years to a far-from-home program that finished below .500 this year. Since Jarmond is his only connection to BC, it also might be difficult to pull him away from his beloved home state.

Similarly, another candidate, Joe Moorhead, has a minimal connection to BC but could be a great addition to the Eagles if Jarmond can convince him to abandon a familiar team. Moorhead has been the head coach at Mississippi State for the last two years after a stint as a quarterback coach and offensive coordinator for Penn State. Under Moorhead’s leadership, the Nittany Lions built a top-25 passing attack through quarterback Trace McSorley. Similar to the last two potential candidates, Moorhead puts an emphasis on recruiting and has been a key part in creating Mississippi State’s current No. 21 recruiting class in the country.

I would encourage Jarmond to be wary of Moorhead, though, as his record over two years at Mississippi State is similar to Addazio’s patterns in his tenure. This year, the Bulldogs accumulated a 6-6 record in the regular season—just like the Eagles–to bring Moorhead’s career record with Mississippi State up to 14-11. In the two seasons before Moorehead arrived, Mississippi State had a similar trajectory, going 6-7 in 2016 and 9-4 in 2017. This means that the addition of Moorhead didn’t create much of an improvement for the Bulldogs, which could spell bad news for the Eagles if he comes to the Heights. Moorhead played quarterback for Fordham, though, which is a Jesuit school. Having the Jesuit values that BC seeks in its new hires could be a bonus in his column as the administration considers him.

Another candidate with a strong Jesuit connection is Pete Carmichael Jr., who graduated from BC and went on to eventually become the offensive coordinator for the NFL’s New Orleans Saints. With his status as a former Eagle, Carmichael is a favorite among alumni and could help to bring more booster support to the program. Currently as an offensive coordinator, Carmichael runs one of the most prolific offenses in the NFL. His experience balancing the run and pass game with the Saints could be helpful for the Eagles and also make great use of Anthony Brown in his final season. Under Carmichael, the Saints have established themselves as a versatile offense through Drew Brees’ passing ability and a powerful run game behind Alvin Kamara and Latavius Murray.

Carmichael, though, has no experience at the NCAA level, which raises concerns about recruiting. He also has never had to run an entire team, as he has focused his career solely on offense, which could be a problem for BC’s struggling defense. Plus, it may be hard for the Eagles to pry him away from his current job, because why would he want to take what seems to be a step back from the highest level of football in the country?

Finally, we come to the crowd—and Vegas—favorite, Al Washington. Washington enters the race for BC’s head coach position as the oddball, but arguably the most supported. At 35, he is the youngest of any candidates discussed here, which causes some concerns about his inexperience. Washington is currently the linebackers coach at Ohio State, though he worked for the Eagles as a special teams and running backs coach from 2012 to 2016. After leaving BC, he went on to Cincinnati where he was the defensive line coach before he transitioned to Michigan as a linebackers coach and was finally hired away to Ohio State.

Even with a lack of head coaching experience, his youth could breathe new life into an Eagles program that seems to be stuck in a rut. Similar to Carmichael, Washington is a graduate of BC and a former defensive lineman, earning him favor from both past and present students.

It would be a gamble for Jarmond to hire Washington, but that risk could have huge rewards. Washington’s supporters argue that being hired away from Michigan to a talented Ohio State program establishes him as a strong up-and-coming assistant, which could forecast a strong future as a head coach. Taking a young coach with a long career ahead of him could poise Washington to build a long and storied career. At the same time, though, he would need a strong offensive and defensive coordinator to counter his lack of full-team experience, so that may create the need for a complete coaching staff overhaul.

Vegas oddsmakers put Washington at the top of the heap, with Carmichael, Fickell, Moorehead, and Brown following behind, among others. Though this list is not exhaustive, each of these potential new coaches could spell a new era for BC football as the Eagles look to climb up from their current plateau.

Though they all have their strengths, I think Washington is too much of a gamble for BC to take at this moment. The Eagles need someone who is mature in terms of experience at a head coaching position. If BC can pry him away from Cincinnati, Luke Fickell is the Eagles’ best bet. His combination of experience, history of success, and youthful energy is just what BC football needs to move on from a mediocre seven-year stretch. He has been a staple in some of the top programs in the country since 2002, and the Eagles could use that sort of consistency in their program.

No matter who the Eagles hire, though, it’s most important that BC finds a coach who can bring an entirely new perspective to the team. Though Addazio helped the Eagles out of a slump, he ended his tenure with the Eagles on a plateau, and BC needs someone to drive the team over the edge. Consistently contending for low-tier bowls should not be the Eagles’ goal, so they need a coach who gives them more than a fighting chance in the ACC and against ranked opponents.