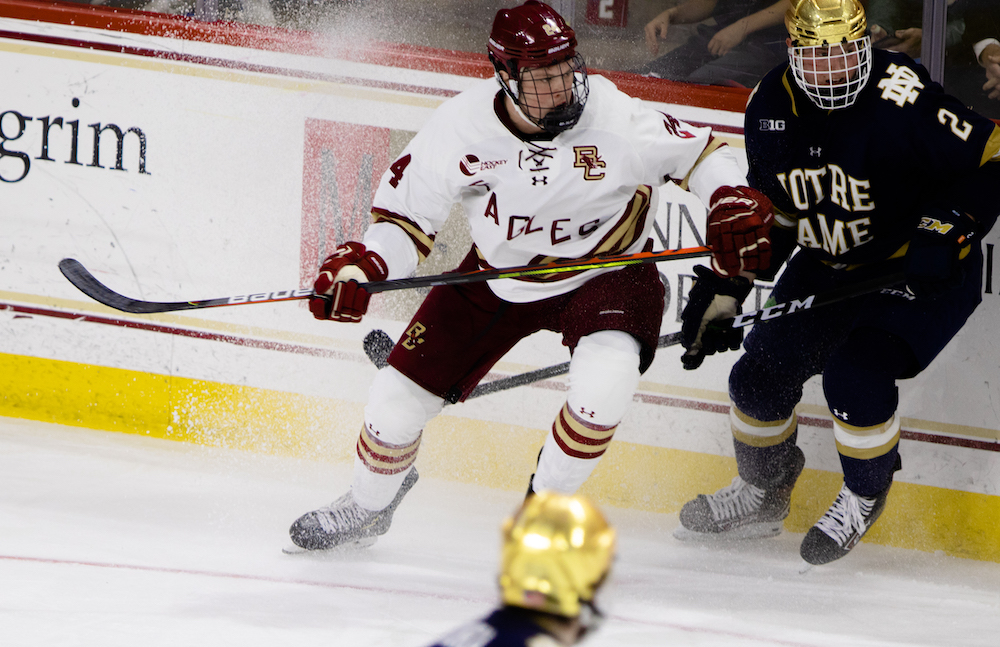 On the first day of November, Boston College men’s hockey was blanked by New Hampshire, suffering its fourth straight loss and falling two games under .500.

Nine games—and nine wins—later, the Eagles are rocketing up the national polls and enter the almost month-long winter break on an unprecedented tear. No. 7 BC just polished off a weekend sweep of rival and 10th-ranked Notre Dame, cruising to a 6-1 victory on Sunday afternoon in South Bend.

The Eagles (11-4, 5-2 Hockey East) first hosted the Irish (8-6-2, 4-2-1 Big Ten) on Friday night and won comfortably, 4-0. The rematch was more of the same to close out the weekend, as BC piled up three first-period goals and never looked back in the easy win. The Eagles have been simply dominant on both ends of the ice during this winning streak, outscoring opponents by a decisive 42-9 margin.

Sunday’s win featured plenty of standout individual performances, headed up by an unusual leading goal scorer. Sophomore Jack McBain, who had eight goals in 49 career games up to this point, found the back of the net twice. Forward David Cotton had a goal—which brought his career total to 50—and a pair of assists, while center Julius Mattila tallied three assists and Aapeli Räsänen chipped in a goal and an assist.

Notre Dame goaltender Cale Morris was pulled by his coach midway through the third period in what proved to be a brutal weekend for the senior. Morris faced 53 shots during the two-game series and let in 10 goals, a far cry from the 20-save shutout he turned in against the Eagles on New Year’s Eve last season. He more than met his match in BC’s Spencer Knight, as the freshman netminder stopped 27 of 28 shots he faced on Sunday.

Knight was backed by a stout Eagles’ defense that limited mistakes and protected him well. BC was able to kill off all four penalties it committed—a game removed from going a perfect 3-for-3—and Knight only had to make eight saves in the final 20 minutes with the game far out of Notre Dame’s reach.

It took just 36 seconds for the Eagles to take the lead for good, as they had a 3-on-2 and Mattila connected with McBain, who then buried a wrister past a screened Morris. Under three minutes later, BC doubled its advantage, as Cotton and Mattila worked together to eventually set up Logan Hutsko for an easy tap-in goal past a beaten Morris.

With a little over two minutes to play in the first period, Notre Dame hurt itself, as an errant pass was intercepted by Cotton and was promptly turned into a goal as the senior became the 54th member of the 50-goal club at BC. The Irish were reeling, and they had no answers on the other end of the ice.

The first intermission didn’t help the Irish, as just two minutes into the second period, BC took advantage of a power play. Matt Boldy, who entered with just two points on the year, sent the puck ahead to McBain. McBain’s first effort was denied by Morris, but the Irish goaltender couldn’t do much on a rebound, which McBain tucked away to earn his first career multi-goal game.

Notre Dame pressed offensively throughout the period but still only managed 11 shots to BC’s 14. One of those finally paid off for the lone Irish goal of the game, though, as Alex Steeves connected with Trevor Janicke, who was able to beat Knight from the slot.

BC iced the thorough win in a span of just 30 seconds near the midway point of the third period. First, at 10:31, Marshall Warren carried the puck out of his own defensive zone and set up a 2-on-1. He opted to fake a pass and instead took it himself, slotting it home past Morris. Then, at 10:52, Räsänen scooped up a rebound and knocked it in off of the back bar of the net. It was a 21-second span that resulted in Morris ending his night early and turning it over to Ryan Bischel.

Not only is BC winning games, but it is doing so in a dominant manner. The last eight have all been decided by two goals or more, and the Eagles have displayed a remarkably deep offense and well-balanced defense. The last three wins have come against top-10 teams by a combined 14-3 margin, so it’s not out of the question start talking about just how far this team could go in the postseason.

BC Plays a Game of Catchup but Can’t Seal the Deal
UPDATE: Pete Frates, Face of ALS Ice Bucket Challenge and BC ’07, Dies at 34