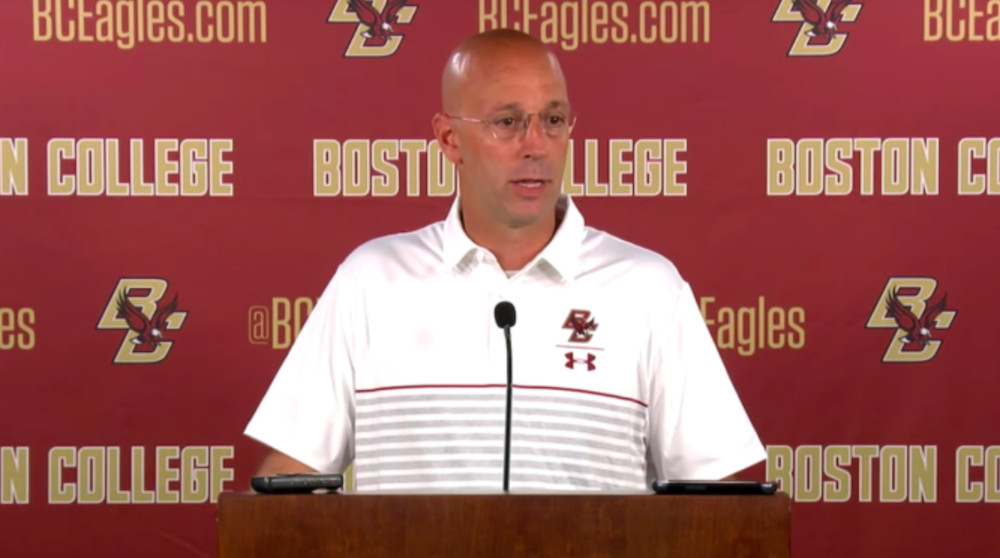 After Steve Addazio’s firing, it’s only a matter of days before there will be a new face of Boston College football. In the meantime, though, there could be some other changes to the Eagles’ coaching staff.

According to multiple reports, BC offensive coordinator Mike Bajakian is in line to replace Mick McCall at Northwestern. McCall served as the Wildcats’ offensive coordinator and quarterbacks coach for 12 years but was fired on Dec. 1. The dismissal followed Northwestern’s worst finish (3-9) since 2002. The Wildcats averaged just 16.3 points per game, the fifth-fewest in the nation. To make matters worse, McCall’s offenses had not ranked inside the top 50 in scoring or yards per play in seven years.

Initially, the Chicago Tribune reported that former Wisconsin offensive coordinator Matt Canada and Notre Dame quarterbacks coach Tom Rees were possible replacements. On Friday night, however, Yahoo! Sports’ Pete Thamel tweeted that, according to a source of his, Northwestern was “finalizing a deal” to hire Bajakian as its new offensive coordinator. Neither program has announced a hiring or vacancy.

Although BC lost eight starters on the defensive side of the ball to graduation in 2019, it returned a wealth of talent on offense, including its starting quarterback, running back, its leading receiver, and a host of capable offensive linemen. Bajakian made the most of the opportunity, guiding the Eagles to one of their best offensive seasons in recent memory. BC averaged 30.9 points per game—tied for sixth among ACC teams—and 451.3 yards per game, good for 28th in the country.

Even though the Eagles’ scoring average dipped a few points this season (they averaged 32.0 points per game in 2018), the offense was more explosive with Bajakian at the helm. Thanks to the tandem of AJ Dillon and David Bailey, BC racked up 267.8 yards per game on the ground, ranking sixth nationally in rushing. The Eagles made significant progress through the air as well, even after third-year starting quarterback Anthony Brown went down with a season-ending ACL tear back in Week 6. In six separate games, BC recorded at least one 50-plus yard pass play—the Eagles registered just three of those in 2018.

All in all, BC wrapped up the regular season ranked 37th in S&P+ offensive rating, 51 spots higher than last year.

Bajakian has a great deal of experience working with quarterbacks, both at the collegiate and professional level. Northwestern is in dire need of development at the position. After all, the Wildcats saw four quarterbacks take the field this season, and none of them posted a positive touchdown to interception ratio.

Before coming to BC, Bajakian spent four years with the Tampa Bay Buccaneers. As the Buccaneers’ quarterbacks coach, he helped Jameis Winston win NFL Rookie of the Year and sprout into one of the league’s best deep ball throwing signal callers. In 2018, he oversaw both Winston and Ryan Fitzpatrick, and the duo combined to finish first in the NFL in passing yards, second in net yards per attempt, and third in touchdowns.

Bajakian also assumed the offensive coordinator role at Tennessee (2013-14), Cincinnati (2010-12), and Central Michigan (2007-09). If he is indeed hired by Northwestern, that will be his fifth different offensive coordinator job in the last 14 years. And for the second year in a row, the Eagles will be looking for someone new to draw up plays.