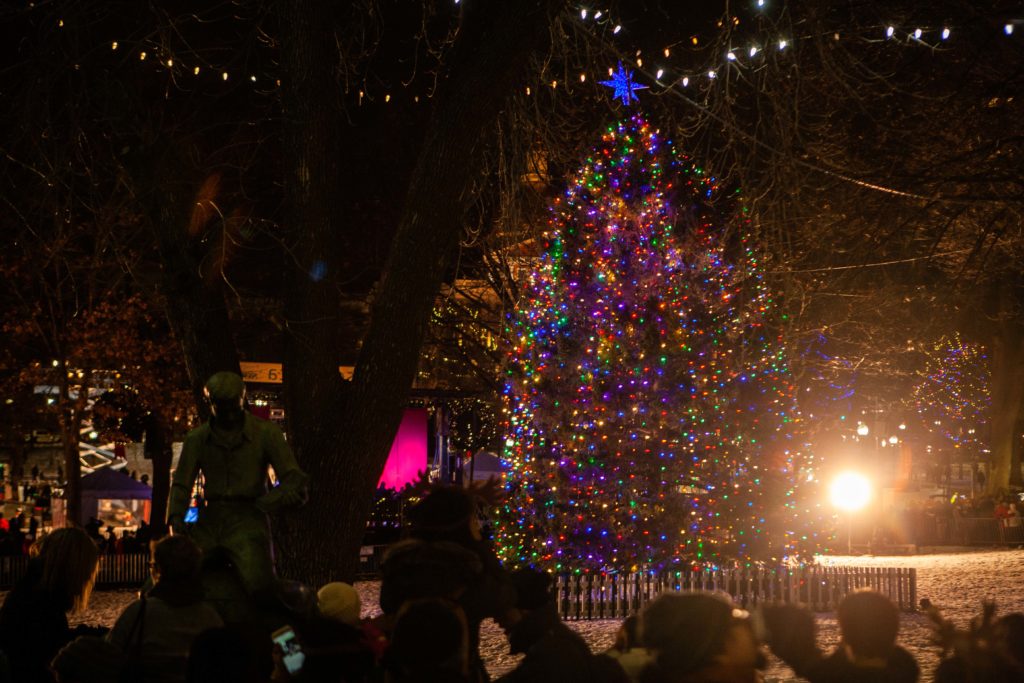 Boston kicked off the holiday season on Thursday with the annual Christmas Tree Lighting on Boston Common. The Common has served as the home of the official Boston Christmas Tree since 1941, and the lighting event has become a city-wide gathering for Boston residents to enjoy Christmas carols, ice-skating performances on Frog Pond, and the stylings of well-known musical guests.

This year, singer/songwriter Matt Nathanson, a Lexington, Mass., native, took the stage for his scheduled performance of Christmas tunes and his popular song “Come on Get Higher.” But the crowd was in for a surprise when country music icon Dolly Parton arrived at the event to introduce the cast of her new musical, Dolly Parton’s Smoky Mountain Christmas Carol, prior to the opening night performance at Emerson Colonial.

The Common erupted in cheers around 8 p.m., when fireworks and Christmas lights illuminated the park for all to see the 45-foot white spruce tree from Pictou County, Nova Scotia.

An annual gift from the Canadian province, the tree follows a long line of more than 40 Nova Scotian evergreens that have served as Boston’s official Christmas tree.

The tree symbolizes the Canadian province’s gratitude for Boston’s support in the aftermath of an infamous collision between two ships—one of which was carrying was explosive devices—in Nova Scotia’s Halifax Harbour in 1917, according to Boston.gov.

The Boston Red Cross and Massachusetts officials responded promptly at the scene with resources and medical aid in the wake of the explosion. This is the 48th year that Nova Scotia has donated a tree to be lit at the annual tree lighting.

Following the tragedy, Nova Scotia presented the city of Boston with a Christmas tree as a token of appreciation. This tradition was reinstated in 1971, and each year, a new evergreen graces Boston Common during the holiday season, symbolizing the community and enduring goodwill that the holiday season inspires.

Caroline Jenson and her 5-year-old daughter Krista were among the many families who joined in the celebration.

“We love to sing carols, and seeing the tree light up every year is such a fun thing for the family to do together,” Jenson said.

boston tree lighting
Reports: Northwestern Interested in Hiring Away BC Offensive Coordinator Mike Bajakian
BC Plays a Game of Catchup but Can’t Seal the Deal