Fordham University theology professor Christiana Zenner spoke about the ethics of the bottled water industry from a Catholic standpoint on Wednesday in a talk titled “The Convenience Just Tastes So Good!” Zenner had also been invited as a scholar-in-residence for the week of Dec. 2 in celebration for PULSE’s 50th anniversary, giving guest lectures in each class section.

Zenner defined water privatization as the transfer of operations on water supplies from public agencies to private corporations. As part of the privatization movement, bottled water has become an increasingly profitable industry since the 1970s, Zenner said.

Despite the concurrent rise of reusable water bottles, the global sale of bottled water has continued rising, she said.

Zenner presented a chart showing market share proportions of the most popular bottled beverages in the United States. Bottled water appeared to be the most purchased drink out of all, followed closely by carbonated soft drinks and far exceeding other drinks such as alcohol, milk, tea, coffee, and energy drinks. While Zenner attributed the main reason for bottled water’s popularity to it being a status marker and a novelty drink, she pointed out that the purchase choice could also be driven by genuine health concerns.

In making a case against treating water as a commodity, Zenner built her argument on the basis that water is a scarce, life-essential resource that cannot be substituted by any alternative. She said that water is one of the fundamental goods created by God for the benefit of all humans according to Catholic Social Teaching.

Zenner argued that the privatization of water, exemplified by the bottled water industry, went directly against the idea that water is a public good. Rather than benefiting people from the area where fresh water was extracted, bottled water business benefits a small group of shareholders elsewhere, Zenner said.

“The concern is especially for people living in situations of poverty, who do not have access to sufficient infrastructure, or whose infrastructure is failing,” Zenner said. “The human right to water is positioned in contrast to the commodification and privatization of water.”

Looking at the ways that the water industry has justified itself, Zenner refuted the legitimacy of developing more environmentally friendly containers as a step in the right direction. She said that the fundamental problem is the prevalent existence of water privatization and its related industries rather than the practices of the businesses.

Zenner also spoke against the practice of selling bottled water as a way to raise funds for building water infrastructure in areas such as Africa. Zenner pointed out that this method also didn’t attempt to change the system of water privatization.

Zenner acknowledged that in emergency situations, such as a sudden failure in infrastructure and natural disasters, bottled water can be the only life-saving solution. Nevertheless, she urged the audience to question contemporary business practices through the lens of water being a social good and to be aware of consumerism surrounding bottled water as a mark of social status. 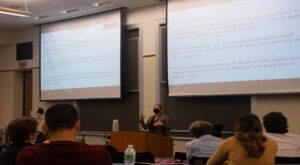 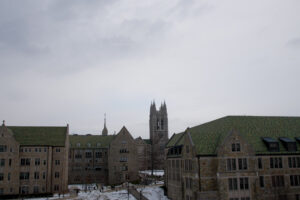 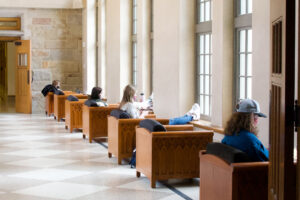