Home » BC Football to Play in the TicketSmarter Birmingham Bowl 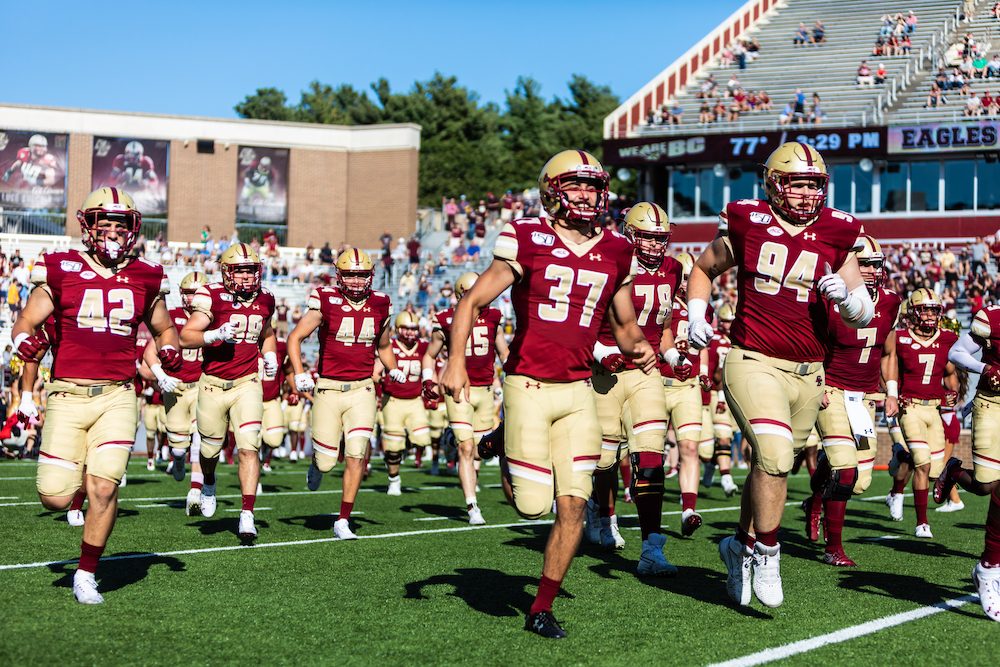 BC Football to Play in the TicketSmarter Birmingham Bowl

It was an up-and-down season for Boston College football, but after securing a win against Pittsburgh in their final regular season game, the Eagles clinched bowl eligibility. And on Sunday afternoon, BC (6-6, 4-4 Atlantic Coast) locked up its spot in the TicketSmarter Birmingham bowl against No. 21 Cincinnati (10-3, 7-1 American), set for kickoff on Jan. 2 at 3 p.m. at Legion Field in Birmingham, Ala.

Going into their final game of the regular season, it was win or go home for the Eagles. BC was 5-6 heading into Pittsburgh and needed one final victory to book its trip to the postseason. If the Eagles lost, former head coach Steve Addazio’s seventh season would end with a losing record, and BC would finish just a seat above the bottom position in the Atlantic Division.

Luckily for BC, the Eagles edged the Panthers to guarantee a spot in the postseason. The Birmingham Bowl will be BC’s sixth bowl appearance in the past seven years. In that span, however, the Eagles have only won one of those games—the 2016 Quick Lane Bowl against Maryland. Last year’s First Responder Bowl was the first bowl game in NCAA history to be canceled because of the weather.

BC hovered around .500 for the vast majority of the year and dipped below that mark for the first time this season with a loss to No.15 Notre Dame in Week 12. With a heartbreaking loss to Florida State in the Red Bandana Game, followed by the blowout in South Bend, the Eagles traveled to Pittsburgh with their bowl-eligibility hopes hanging by a thread.

The Eagles, desperate to prolong their season, put together a defensive-minded game against the Panthers that also featured a standout performance by running back AJ Dillon.

“[Earning a bowl game] is absolutely rewarding,” said co-captain Tanner Karafa in a press conference Sunday night. “Thinking about all the time you’ve spent here, all the effort, and all the relationships you’ve made, it’s very rewarding.”

Even after Addazio’s firing, BC feels confident in its ability to compete against a Cincinnati team that’s only lost twice this season—against No. 2 Ohio State and No. 17 Memphis.

“It’s been a little bit of a whirlwind, but I wish Coach Addazio the best,” Karafa said. “I was happy that I got to spend all five years with the same head coach, so we wish him the best of luck, and I know Coach Gunnell’s going to do a great job getting us the seventh win.”

The Bearcats have orchestrated a major turnaround in their program over the last two years, going from 4-8 in 2017 to 11-2 last year before turning in a 10-3 record this season. They have appeared in 15 bowl games since 2000 and have won seven, including a victory against Virginia Tech in the Military Bowl last year.

With an interim head coach and a ranked opponent, it will take more than a well-played game for BC to win its first bowl since 2016.

“You need guys who are going to lean on each other and fight for each other when things aren’t going good,” said co-captain Ben Glines on how BC will secure a postseason win. “That’s really when people get measured, and I think we’re about to get measured here over this next month.”