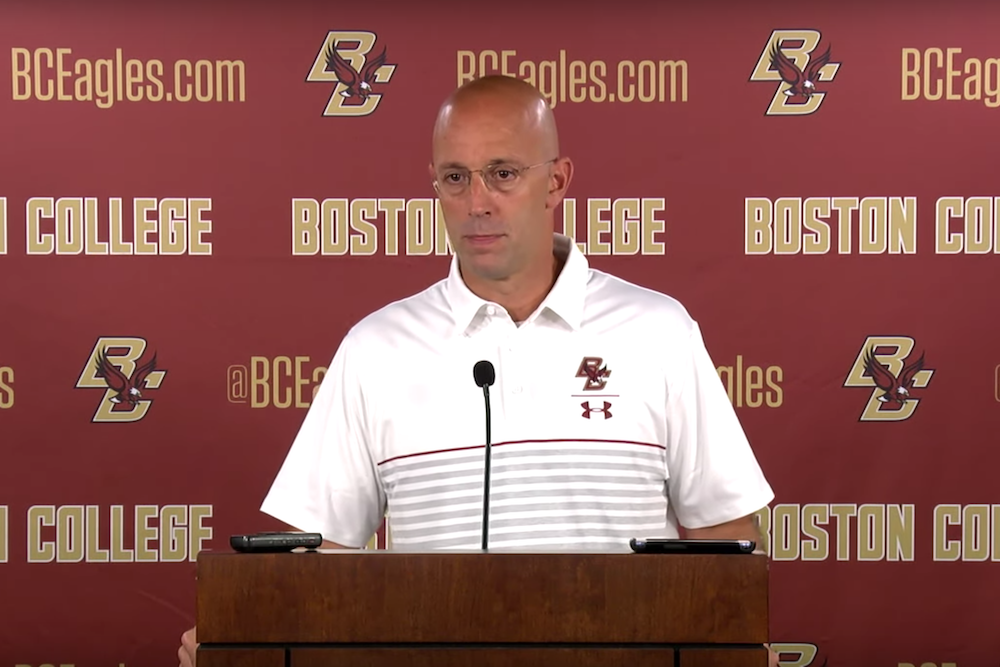 After engineering an offense that ranked 25th nationally in total offense, Boston College football offensive coordinator and quarterbacks coach Mike Bajakian is moving on to Evanston, Ill., to assume the same role with Northwestern—a team desperately in need of an offensive pulse. He’ll work under Wildcats’ head coach Pat Fitzgerald, who just finished his 14th season at the helm.

“I am grateful to Pat Fitzgerald, Jim Phillips and Morty Schapiro for this opportunity at a world-class institution,” Bajakian said in a statement issued by the university on Wednesday. “It is an honor to join Coach Fitzgerald and his staff, developing the highest caliber student-athletes, in the most competitive conference in collegiate football.”

The Wildcats’ hiring of Bajakian comes less than two weeks after BC announced it was firing former head coach Steve Addazio. Bajakian’s departure from BC marks the second straight year that a BC offensive coordinator has taken a job elsewhere at the end of the season.

“He has demonstrated outstanding impact and improvement at every stop of his career, both in college football and in the National Football League,” Northwestern head coach Pat Fitzgerald said in the statement. “The feedback we received from former colleagues and student-athletes was impeccable. He has helmed offenses that beat you through the air, and others that punished opponents on the ground, depending on personnel.”

Bajakian arrived at BC after four years with the Tampa Bay Buccaneers as a quarterbacks coach. In his only season with the Eagles, he oversaw an offense that led the ACC in rushing (267.8 yards per game) and averaged nearly 31 points per game. Bajakian had previously held collegiate offensive coordinator roles at Tennessee, Cincinnati, and Central Michigan.

In seven of his nine seasons as a collegiate offensive coordinator, Bajakian has produced a top-40 offense, according to the release. Across that nine-year span, Bajakian’s offenses have averaged 31.3 points and almost 430 points per game.

The Wildcats are coming off a season in which they ranked near the bottom of the country in nearly every offensive metric. Northwestern fired offensive coordinator and quarterbacks coach Mick McCall after the Wildcats finished 126th in the country in scoring (16.3 points per game), 123rd in total offense (297.1 yards per game), and 127th in passing offense (117 yards per game) this season. McCall had been with Northwestern for 12 seasons.

Bajakian will have a big first test with the Wildcats when they face Michigan State on the road in his first game as offensive coordinator.