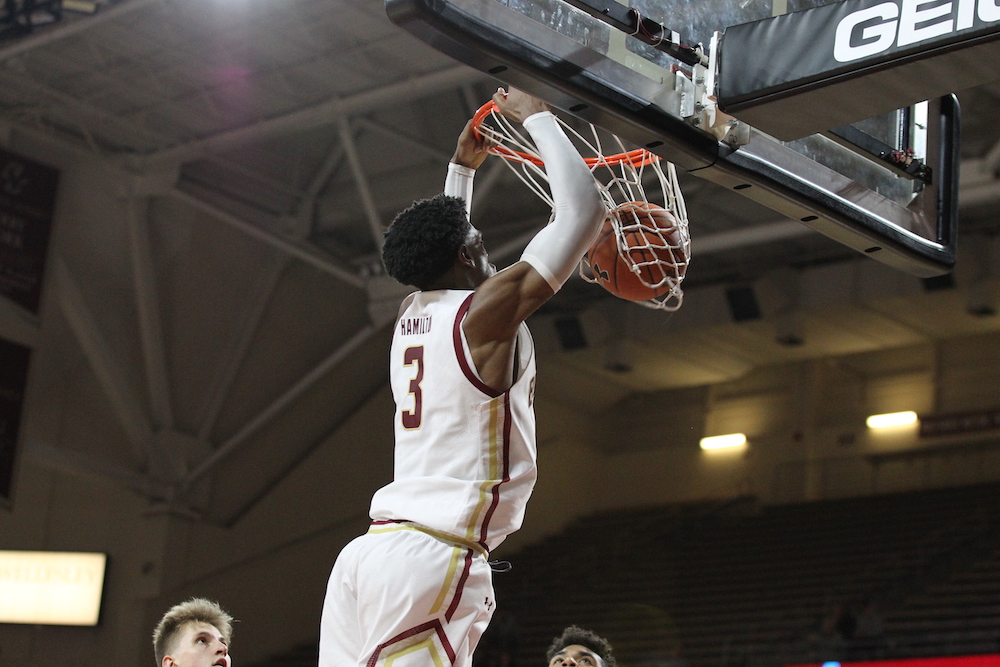 Boston College men’s basketball put up a dominant performance against Central Connecticut State on Sunday afternoon, with four Eagles putting up double-digit figures. The win puts the Eagles on a three-game win streak before Jim Christian and his squad head out west for a Pac-12 matchup against UC Berkeley.

The Eagles (7-5, 2-0 Atlantic Coast) have been developing better and better team chemistry over the course of this streak⁠—and the season⁠—and that was undoubtedly clear in the Eagles’ 75-55 victory against CCSU (0-10).

The natural chemistry between the Hamilton brothers led to a dominant scoring effort in which senior Jared Hamilton put up 18 points while the Jairus contributed nine of his own.

“We are just used to doing what we do when we are back home playing,” Jairus Hamilton said about playing with his brother. “The fact that we have the opportunity to do it on a bigger stage is just incredible.”

One such moment displaying the brotherly connection happened early in the first half when Jairus brought the score to 10-7 with a wide-open 3-pointer from the corner. Jared, on the following drive, notched three more points of his own. Then, the Blue Devils increased pressure with a half-court press, and the Hamilton brothers connected when Jared found his younger brother cutting down the paint to finish off the drive with an emphatic dunk.

Guards Jay Heath and Derryck Thornton also scored 16 and 12 points respectively. Thornton completely tore apart the Blue Devils’ press with a drive up the middle of the court. After losing the defender, Thornton passed to C.J. Felder, who then kicked it right back to Thornton as he sat ready and waiting to launch a shot from behind the arc to bring the score to 28-15.

Heath has been one of the most outstanding freshmen not only for BC but in the ACC as well. His shot was falling from just about everywhere against the Blue Devils. Whether it was a pick-and-pop jumper or a fast-break layup that resulted from his quick acceleration past a CCSU defender, Heath quietly contributed in seemingly every way possible.

The biggest standout of the day⁠—as has been the case for many games this season⁠—was Steffon Mitchell. Sunday’s Player of the Game has had an emphatic season, and his play against CCSU was no exception. Although he only shot 5-of-9 from the field on the day, his other contributions outweighed his 13 points. Mitchell’s 12 rebounds brought him to his third double-double of the year and the ninth of his career.

Mitchell started out rather cold in the first half, when he missed two consecutive layups with no one guarding him. In the second half, on the other hand, the senior came out firing with a difficult and-1 shot that, following the made free throw, brought BC to a 24-point lead. The next offensive drive had freshman Julian Rishwain finding Mitchell storming down the court from the left wing to finish off the drive with a layup with the utmost finesse.

Even through turnovers and missed shots, the Eagles’ double-digit victory was due in no small part to capitalizing on fast-break scoring opportunities, with 10 of their 74 points coming off the break.

The Blue Devils also had major turnover issues, and BC made the most of such careless ball handling. The Eagles dropped in 23 points off CCSU’s 24 turnovers and had 11 points off 16 offensive rebounds, a rather impressive feat considering the lack of rebounding prowess with Nik Popovic out with a back injury.

Head coach Jim Christian acknowledged the pitfalls of the team but equally recognized how the team has developed over the three-game win streak.

“We played well over the last three games,” he said. “We have established a good rhythm, but there were times today where the team was playing to the score a little bit.”

Christian also warned of such tendencies not being acceptable with upcoming play against ACC matchups that include the likes of Duke and Virginia.

The game ultimately finished in much the same way it started. The Hamilton brothers polished off the victory, starting with Jared Hamilton completing an and-1 opportunity to bring the Eagles to a 21-point lead.

Jairus then finished off the win with a tremendous block on Greg Outlaw, CCSU’s starting guard, who led his team with 18 points on 8-17 shooting. Hamilton, however, got the last word and mean-mugged into the camera after sending Outlaw’s shot into a section of fans. Needless to say, the whole BC bench erupted the following play when Jairus capitalized on an and-1 of his own.

The Eagles have begun to hit their stride during these last three games, but if anything, the next three are all the more important. UC Berkeley, BC’s next opponent, is sure to be a tough contest, and BC has struggled this season against similarly composed teams. No. 7 Duke and No. 9 Virginia are both road games that could put a damper on the Eagles’ win streak.

Although the Eagles sit 2-0 in the ACC so far this season, a greater challenge awaits once ACC play begins to rev up. Christian believes in the squad and has witnessed notable change, but he can only hope that it will be enough to bring this team to a higher level of play than last season and on par with other ranked ACC teams.

First Half Surge, Soule, Garraud Lead BC Over BU
Hafley Promises to Bring Back ‘Magical Moments’ in Introductory Press Conference