Home » First Half Surge, Soule, Garraud Lead BC Over BU 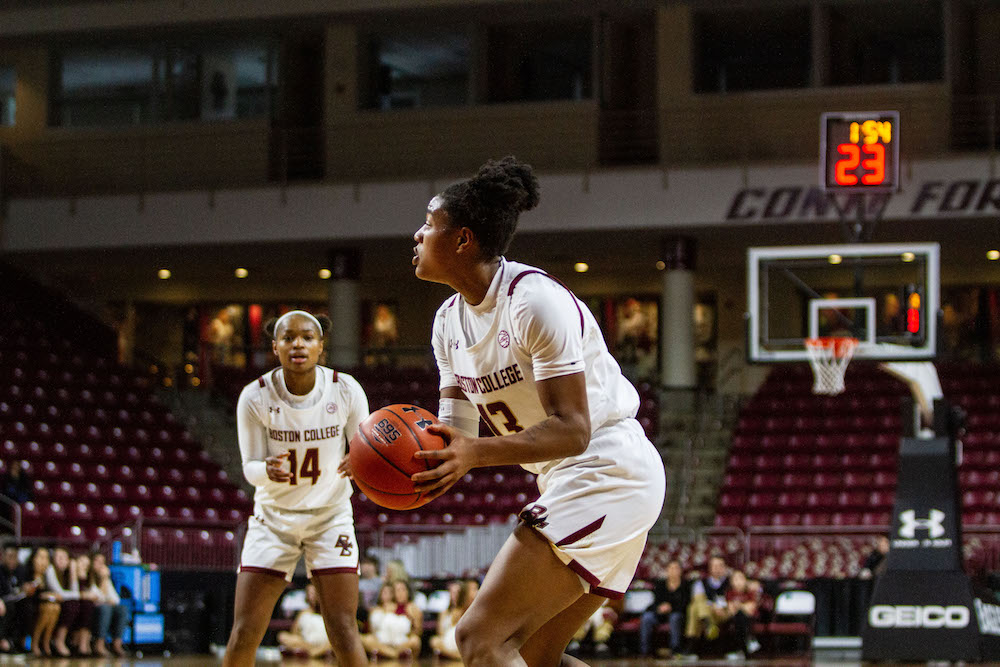 First Half Surge, Soule, Garraud Lead BC Over BU

While the Battle of Comm. Ave is most well-known as the rivalry between Boston College and Boston University’s hockey teams, the fierce competition does not stop there. As the Eagles’ closest rivals—both location-wise and, in some cases, conference-wise—the two teams are frequently pitted against each other. This stands true for women’s basketball as well.

Since 1978, Boston College women’s basketball has met the Terriers in 26 total contests. Prior to Sunday’s matchup, the Eagles held a 14-11 series lead over BU, and they had topped the Terriers 78-51 in their most recent meeting during the 2018-19 season.

And yet, coming into Sunday’s matchup, neither team seemed to have the advantage. Boston College (6-5, 0-1 Atlantic Coast) was coming off a two-game slide in back-to-back losses against Northwestern and Duke and had yet to win a road game this season. Meanwhile, Boston University (3-6) hadn’t won a game since Nov. 20, and none of their three wins have come at home.

One would assume, therefore, that the matchup would consist of largely back-and-forth play, neither team truly taking the lead until late in the second half. But that was not the case. Less than halfway through the first period, the Eagles had the clear advantage, running up the score quickly following frequent turnovers in the Terriers’ end. While BU has historically struggled at home, it essentially handed the Eagles this win, with 20 turnovers, most resulting in points against.

While the Eagles had been forced to play catchup in their recent contests against Duke and Northwestern, it was BC that set the pace in this game. After each team collected its initial points, the Eagles began to get in a rhythm, going on a 7-0 run early in the first quarter to distance themselves from the Terriers.

With six of BU’s turnovers coming in the first quarter, the Eagles were able to continue building their score, only allowing the Terriers to score five points in the opening minutes of the game. And, despite a late surge by BU, the Eagles retained their extensive lead and escaped the first quarter up 24-13.

Despite its high-flying play in the first quarter, BC’s offense was hindered in the second quarter as freshman star Taylor Soule and senior Emma Guy were called on early fouls. Guy and Soule were two key players in the first quarter, as their efforts in forcing BU turnovers allowed the Eagles to capture their early lead.

As such, BC was forced to play much more conservatively in this quarter, so as to not give points away to BU. Throughout the quarter, though, the Terriers were able to chip away at the Eagles’ lead, securing three points off free throw opportunities as well as multiple field goals. But despite being outscored by the Terriers 16-17 in the quarter, BC remained on top come halftime, with a score of 40-30.

The Terriers were able to mostly stay with the Eagles throughout the first half, as seen by the relatively close score at the end of each quarter—however, it was during the third quarter that BC truly ran away with the game.

While it was a slow start to the third quarter—neither team scoring until just under the nine-minute mark—the Eagles were far from finished with their assault on the Terriers’ court. A layup by Soule broke the scoring barrier, and BC was ready to collect its points.

This quarter boasted the highest differential between the two teams’ scoring, as the Eagles kept the Terriers to only nine points in the entire third quarter. Meanwhile, BC’s offense truly clicked as the forwards shot 53 percent from the field and had built up a 25-point lead before the Terriers collected a couple of points late in the quarter. Soule and sophomore teammate Marnelle Garraud combined for a total of 12 points in the quarter, sustaining BC’s lead at 63-39.

The fourth quarter was no better for the Terriers, as the Eagles continued to dramatically outscore the already beaten team. A 15-11 run by BC pushed its lead to 28 points, and it only climbed from there. BU was able to secure 18 points in this quarter—the most they had been able to all game—but the Eagles’ ability to quickly and efficiently transition between defensive and offensive gave the Terriers little time to adjust and react, allowing BC to further run up the score.

The Eagles held their largest lead of the game with 1:31 left in the fourth quarter, leading the Terriers by 34 points. Shortly after, BU would collect three good free throws and a layup to bring the deficit to 31, but the game was already over. By the time the Eagles secured the win, nine out of the 10 dressed players on the BC bench had made their mark on the scoresheet, with six of those players reaching the double-digit mark for points.

In the 88-57 win over the Terriers, BC claimed its first road win of the season, improving its record to 6-5 as its five-game road swing comes to a close. But now, the Eagles have more pressing matters to look into.

“[We] really just want to continue to polish up the things we’re not doing well and make us the best players we can be, come the ACC play, because without that you can’t win at that level,” said head coach Joanna Bernabei-McNamee following the win.

Last year, in Bernabei-McNamee’s first season as head coach of BC women’s basketball, the team went 3-13 in the ACC. In the coming days, the Eagles will be looking forward to conference play, starting with a home game against North Carolina State at the end of December.