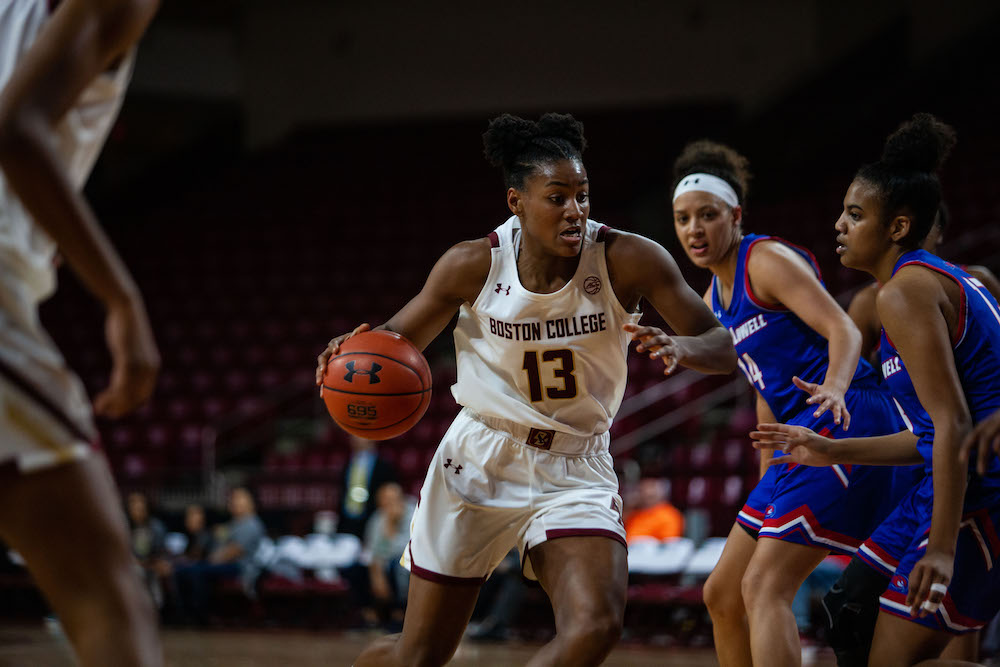 After losing three of its last four games, Boston College women’s basketball blew out rival Boston University by 31 points last Sunday. On Friday afternoon, the Eagles decided to do it again, as five different players reached double digits in a thorough 109-69 win over Delaware State.

BC (7-5, 0-1 Atlantic Coast) wrapped up non-conference play with one of its best offensive games of the season. After building a slim four-point first-quarter lead over the visiting Hornets (4-8), the Eagles erupted in the second quarter. After Delaware State guard Miajah Bullock scored on the first play of the second quarter, BC went on a 19-0 run, putting the game out of reach and coasting to its second-biggest win of the season.

Taylor Soule had a team-high 23 points and 16 rebounds in just 23 minutes of action, overpowering the Hornets with ease. She made her way to the free throw line nine times and sunk seven of them. Soule also added four blocks in what was a career-defining game. Cameron Swartz turned in 19 points and eight assists, Emma Guy had 19 points and three blocks, and Marnelle Garraud buried four 3-pointers and totaled 14 points.

“I think I gained a lot of confidence over the summer and before the season started,” Soule said after the game, per BC Athletics. “I think the last couple games, at least rebounding-wise, I’ve really honed in on my role.”

Delaware State entered having lost two consecutive road games, and Conte Forum wasn’t kind to the Hornets. Ten different players scored in the loss, led by 15 from Lyric Turner—a perimeter threat who sunk four 3-pointers—but it wasn’t remotely enough to keep pace with BC. The Eagles crashed the board, managing a decisive 17-rebound edge over the Hornets, and they also had a 21-11 advantage in points off turnovers while shooting 52 percent from the field.

Just 17 seconds into the game, Swartz sliced in for a layup, and Guy followed with one of her own 30 seconds later. That early 4-0 lead would never go away, as the Eagles let the Hornets within one near the end of the first quarter but never trailed. Swartz had nine of her 19 points in the first quarter alone, with one 3-pointer answering one from Turner to stretch the lead back to four. Soule had an outsized impact on the game as well in the first 10 minutes, scoring seven points in eight minutes en route to her first career double-double.

After Bullock’s layup opened the second frame, the Eagles went on a dominant run. Soule started the 19-0 spurt with a layup, then Guy and Swartz both had fast-break scores. Makayla Dickens added a layup, then Soule worked into the paint on back-to-back possessions. The sheer speed with which BC was playing clearly outmatched the Hornets, who were unable to generate anything offensively. Dickens added four more points before Milan Bolden-Morris capped the run with a 3-pointer.

With the lead now stretched to 21, the Eagles didn’t settle. They went into halftime with a decisive 24-point edge only to build on it as the offense was firing on all cylinders. BC hit on 10-of-15 shots in the third quarter, a sizzling 66.7 percent clip that more than doubled up Delaware State’s total. The Eagles extended the lead to as much as 42 points in what was a simply dominant effort.

Clara Ford impressed off the bench in the second half for BC, totaling 10 points and four rebounds as she used her size to find success. Guy and Soule both reached double figures after the break, but the duo only played a minute apiece in the fourth quarter.

It was a comfortable win and a good one to go into the Winter Break for the Eagles, as the opponents get substantially more difficult from here on out. Nine days from now, BC hosts No. 9 North Carolina State, the start of a 17-game ACC slate that is filled with pitfalls. The Eagles managed just three wins in conference play last year but will aim to improve on that mark behind improved rebounding and offensive firepower that has shown in spurts thus far this season.