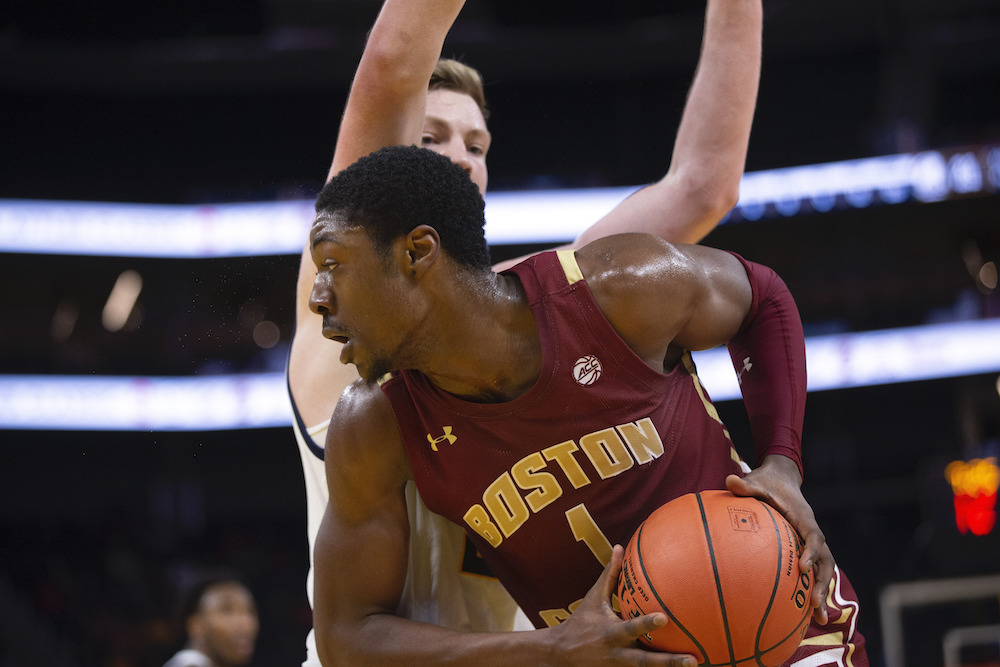 The last time Boston College men’s basketball faced UC Berkeley, Julian Rishwain was 9 years old. Saturday night, in the teams’ second meeting of this decade, the Los Angeles native went on a scoring frenzy to help the Eagles to a tight 64-60 victory.

Midway through the second half, the Eagles (8-5, 2-0 Atlantic Coast) trailed the Golden Bears (6-6) by double digits until Rishwain got his hands on the ball and never looked back. The freshman hit clutch back-to-back 3-pointers followed by a short-range jumper to set up the Eagles’ first lead since the third minute of the game.

The contest wasn’t always that close for the Eagles, though. Midway through the first half, BC trailed by double digits, but an 8-0 run by BC brought the game back within reach just before halftime.

The game began evenly matched as the two teams traded points until they were knotted up at 10 apiece. From there, the Golden Bears began to hit their stride. Cal took over on offense, particularly through play in the paint, and it expanded its lead to 13. On the night, Cal put up 36 points in the paint to BC’s 16. Cal’s Matt Bradley led the charge with 21 points and nine rebounds.

A jumper by Rishwain began to turn the tide for the Eagles as they went on their first long, unanswered run of the night. The Eagles crawled their way back within three going into halftime—largely thanks to Jared and Jairus Hamilton—but it looked like they were outmatched by the Golden Bears.

BC came out of the break with a renewed energy, having just gained some momentum before the half. Even so, the Bears began to break away once more, expanding their lead to 11 once again.

Then, Rishwain stepped in.

Notching eight straight clutch points for the Eagles, Rishwain created unprecedented momentum for BC, which set up a back-and-forth contest for the rest of the game. Jay Heath also added two points in crunch time on a short-range jumper after Rishwain’s second 3-pointer.

The Eagles took back the lead on a Steffon Mitchell layup with the game at 54-52. BC held tight to its lead for the rest of the game, even when the Golden Bears came back within one point.

Jairus Hamilton led the Eagles with 18 points and eight rebounds (seven from the defensive glass), while Rishwain and Jairus’ brother Jared each tallied 12 points off the bench. Mitchell, though he was uncharacteristically quiet on the scoring front, had a team-high five assists, as well as six rebounds, second only to Hamilton.

What kept the score so evenly matched, though, was the number of fouls. BC gave up 18 personal fouls to Cal’s 21, so both teams spent a disproportionate amount of time at the line. The Eagles’ 75 percent free throw shooting clip was a major factor in BC’s victory, as Cal only hit on 57.9 percent of its foul shots.

Each team also gave up 16 turnovers, but Cal had the advantage in points after. The Golden Bears tallied 22 points off turnovers to BC’s 15.

In BC’s fourth straight win, the Eagles showed strong resilience and grit to come back from a double-digit deficit not once, but twice. Jim Christian’s squad played a hard-fought game to bring home a victory just before a week-long break for Christmas.