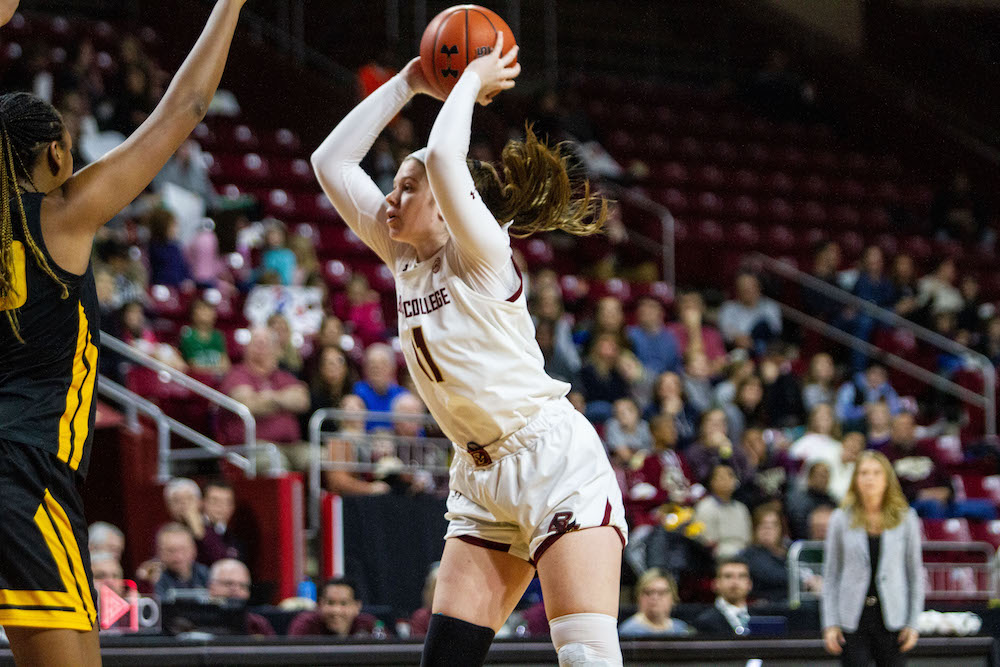 Despite Third Quarter Push, Eagles Fall to No. 9 NC State

One of the most notable things about Boston College women’s basketball entering the 2019-20 season was just how similar the team was to last year. All five starters from the Eagles’ first-round loss to Virginia in the ACC Tournament returned, and the lone impactful newcomer was transfer Cameron Swartz.

So far, the results haven’t changed much either. On Sunday afternoon at Conte Forum, BC dropped its second conference game in a row—and 11th straight dating back to last year—as it fell to No. 9 North Carolina State, 72-54.

The Eagles (7-6, 0-2 Atlantic Coast) had rebounded from an ACC-opening loss to Duke by handily dispatching non-conference foes Delaware State and Boston University but gave up an 8-0 run to the undefeated Wolfpack (12-0, 0-1) after scoring first and would trail the rest of the way. BC closed it to just a five-point deficit in the third quarter, but it fell apart late and watched as N.C. State rolled to an 18-point win.

The Wolfpack turned the ball over 18 times, three more times than its hosts, but used a balanced scoring attack to pull away. All five starters reached double digits, as did the first player off the bench. Kai Crutchfield had 14 points and seven rebounds while Elissa Cunane registered a double-double with 12 points and 10 rebounds.

BC, meanwhile, regressed offensively. After piling up a season-high 109 points a little over a week ago, the Eagles posted their worst field goal percentage of the year (34.8 percent) and attempted a season-low four free throws. It resulted in a season-low 54 points and a disappointing conference loss as they’ve struggled to find any success within the ACC for quite a long time now.

N.C. State surged in the first quarter, quickly answering a game-opening layup from BC’s Emma Guy, who finished with a team-high 14 points. The Wolfpack went on a quick 8-0 run behind points from four different players and stretched the lead as the quarter went on. Crutchfield had eight points in the first 10 minutes, and she reflected the offensive success that N.C. State had—it finished 10-of-15 from the field, an impressive 66.7 percent rate.

The Eagles battled back in the second quarter, bringing what had been a 15-point deficit to just eight at the break. After Wolfpack guard Jada Boyd knocked down a 3-pointer, BC’s Taylor Ortlepp answered with one of her own. It was a welcome sight to see Ortlepp return from injury, as she came off the bench to play 25 minutes after totaling just 24 in her only other two appearances this season. Her 3-pointer was more than half of her five-point game on 2-of-8 shooting, but she brings a welcome deep threat to the Eagles’ rotation.

N.C. State stretched the lead back to 18 with an Aislinn Konig trey, but Marnelle Garraud again answered for the Eagles to kickstart a 12-2 run into the break. The stretch featured a 3-pointer from Milan Bolden-Morris, a jumper from Swartz, and layups from Guy and Garraud.

The momentum carried over after the break, as BC trimmed the deficit to just five points midway through the third quarter after a layup from Taylor Soule, who’d finish with six points and 10 rebounds. The undefeated Wolfpack remained unfazed, though, and nearly doubled up the Eagles, 14-8, in the final five minutes of the third.

With the deficit back to double digits, BC was unable to muster up a rally in the fourth. The Eagles were held to just nine points in the final 10 minutes, going just 4-of-14 from the field and a woeful 1-of-8 from the perimeter. N.C. State managed just 16 points, six from Boyd, but it was more than enough to take the comfortable win.

BC made it interesting in the middle two quarters against a top-10 team in the country, but it was clear throughout that it lacked the firepower to keep pace. The Eagles have shown flashes of an efficient offense—they entered averaging 68 points per game in their last three games—but when it abandons them, the defense isn’t nearly strong enough to keep them in it. N.C. State went on several offensive runs and left BC playing catch-up, which is likely going to be a recurring sight in the extremely talented ACC.