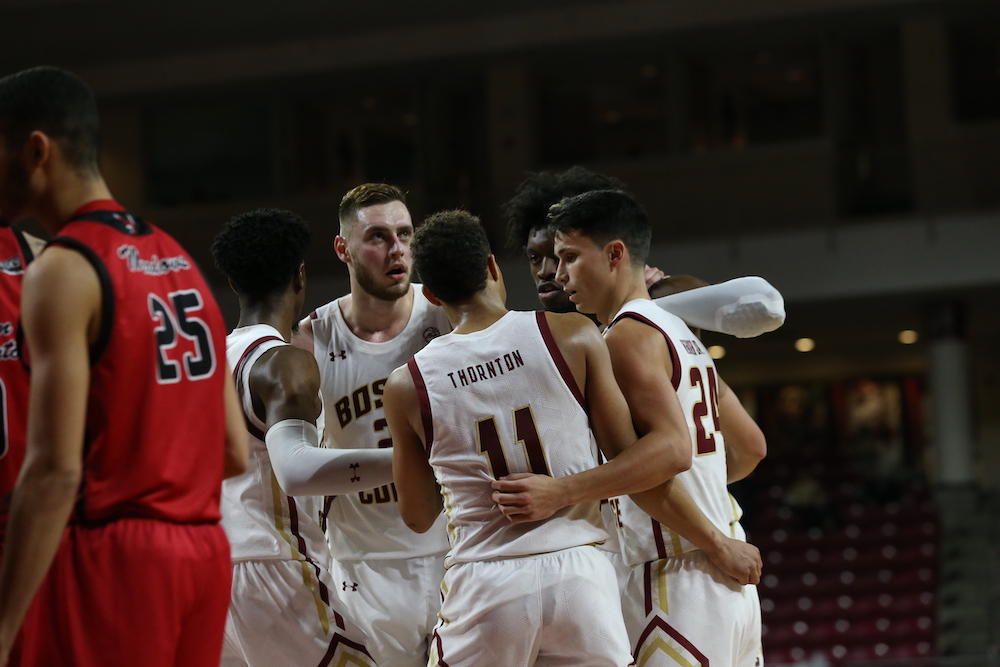 Two years ago, Boston College men’s basketball put up 89 points on the then-No. 1 Duke in Durham to stage the biggest upset for Jim Christian’s squad this decade. Duke put up a good fight, tallying 84 points, but it was a crushing blow for the nation’s top squad at the time.

Tuesday night, in another iteration of BC versus conference rival Duke, the winning team put up 88 points (similarly to 2017), but this time, the Eagles were on the wrong side of the scoreline. BC tallied its second-fewest points this season to fall to Duke, 88-49.

BC (8-6, 2-1 Atlantic Coast) entered Cameron Indoor Stadium hot on a four-game win streak, but its momentum wasn’t enough to fend off the prolific No. 2 Duke (12-1, 2-0 Atlantic Coast) attack and lockdown defense.

The Eagles’ offense couldn’t seem to create many scoring chances, and for those that they did happen upon, Duke’s defense stopped BC from capitalizing. On the night, BC hit on just 36.4 percent of free throws, 33.9 percent of shots from the field, and a mere 16.7 percent from 3-point range.

The Eagles’ stars were quiet in Durham, as CJ Felder led the team with 13 points and six rebounds, but he also gave up five turnovers. Jay Heath was the second leading scorer for the Eagles, tallying eight, with Derryck Thornton rounding out the top three with six points. Steffon Mitchell, usually a standout in BC’s box score, managed just one point on the night for the Eagles.

The Blue Devils, on the other hand, had two players hit double-digit scoring, and all 11 players on their roster contributed at least three points of their own. Matthew Hurt led Duke with 25, while Wendell Moore followed with 11.

The Blue Devils made a staggering 50.2 percent of their shots from the field, as well as an impressive 42.9 percent from behind the arc.

To start the game, Thornton charged the paint, an area in which he has thrived this season, and put up a jumper to get BC on the board first. But his two points gave BC its first and only lead of the night. Duke’s Alex O’Connell sank a 3-pointer to take a one-score lead, and Duke never looked back.

The Blue Devils kept rolling after O’Connell’s first score to take a 26-point lead going into the break. This difference was due in no small part to the fact that Duke hit on nearly twice as many of its shots as BC did—BC shot for just 28.6 percent while Duke hit on 52.9 percent of its shots.

Duke’s lead hovered around 30 for most of the second half, though BC’s shooting did improve in that frame. Once again, BC opened the half with points, as Jairus Hamilton’s jumper briefly decreased the Blue Devils’ lead.

Later, the Eagles later gave up four straight fastbreak points off Duke’s defensive rebounds, and there was no coming back for BC. Duke’s Vernon Carey was the difference maker for the Blue Devils in terms of rebounds, coming up with nine grabs off the boards.

Though the Eagles struggled to score, they did manage to hold Duke right around its season average of 83.3 points per game. Duke has long been known as one of the most prolific offenses in the country, and BC did its part to stop the Blue Devils from running up the score into triple digits, as they have been known to do.

With another ACC matchup coming just a week after the loss to Duke, the Eagles will have to regroup to figure out how to tackle the reigning national champions, Virginia, at home. Though their loss to Duke may be one to forget, the Eagles may have to channel their 2017 team in hopes of yet another upset victory.

Dominant First Period for Crimson Drowns Out BC
Notebook: BC Can’t Control Ridder, Bearcats Slice Through Eagles in Birmingham Bowl