Nine Boston College football players received All-ACC honors this year, and more than half of them were on the offensive line. In fact, each of the Eagles’ five starting offensive linemen earned recognition from the conference following the conclusion of the regular season. All but one of them will be returning to Chestnut Hill in 2020, but their coach, Phil Trautwein, is on the move.

On Friday night, Penn State head coach James Franklin announced the hiring of Trautwein as the Nittany Lions’ new offensive line coach. A New Jersey native, Trautwein will now join the staff of a Penn State program that he grew up watching. Excitement aside, the two-year Eagles O-line coach made sure to pay his respects to BC before shifting his focus to Big Ten recruiting.

BC fans, coaches, and players returned the praise. Eagles right tackle Ben Petrula tweeted, “Thank you for a great two years coach! Have changed my life forever. Thank you for everything. Congratulations!!” Others including center Alec Lindstrom retweeted Trautwein’s parting words.

Not only did Trautwein develop five All-ACC offensive linemen in 2019, but he also saw four of his players collect conference accolades the previous season, including Chris Lindstrom (First Team) who ended up being drafted by the Atlanta Falcons with the 14th overall pick in the 2018 NFL Draft. This time around, it was right guard John Phillips (First Team), left guard Zion Johnson (Second Team), Petrula (Second Team), Alec Lindstrom (Third Team), and left tackle Tyler Vrabel (Honorable Mention) in the spotlight.

Even though BC lost third-year starting quarterback Anthony Brown in Week 6 to a torn ACL, the Eagles’ offense largely maintained its success—and that’s largely due to the play of the offensive line. The big guys up front paved the way for the eighth-best rushing attack in the country, as BC averaged 253.2 yards on the ground per game. The Eagles piled up more than 300 rushing yards on three separate occasions, most notably amid BC’s offensive explosion at Syracuse, where AJ Dillon and David Bailey spearheaded a 496-yard performance.

The Eagles’ offensive line was even better protecting the quarterback than it was blocking for the run. BC allowed 13 sacks all season, good for first in the ACC and fourth in the FBS. The Eagles were one of five teams in the country this year to boast a top-10 rushing offense and rank inside the top 10 in fewest sacks allowed, the others being Buffalo, Air Force, Louisiana, and Army. BC allowed zero sacks in five different games this season, at one point going four straight contests without letting either Brown or Dennis Grosel go down behind the line of scrimmage.

When all was said and done, per ESPN’s Bill Connelly, BC clocked out first nationally in blitz down sack rate and third in power success rate, a metric used to measure the percentage of third and fourth down runs with two yards or less to go that either moved the chains or resulted in a touchdown.

Trautwein helped mentor BC’s offensive linemen, both young and old. This fall, he worked with Vrabel, a redshirt freshman tasked with guarding the blind side. Vrabel didn’t concede a single sack all season, recording more than 315 pass blocks in the process. During the regular season, the Bellaire, Texas native logged six clean sheet performances (zero pressures allowed), according to Pro Football Focus (PFF).

Additionally, Trautwein played a role in Phillips’ breakthrough season. Phillips, a graduate student with several starts under his belt prior to this year but little notoriety to show for it, took the next step in 2019. Phillips entered Thursday’s Birmingham Bowl with a PFF grade of 72.5, ranking second among ACC guards, and rounded out the year as a legitimate NFL prospect.

The foundation of Trautwein’s young career has been built at BC. Before taking over as the Eagles’ O-line coach in 2018, he had also served as a grad assistant with the program from 2013 to 2015. Now, he’s making the jump to another program that he also holds near and dear to his heart.

“Growing up in New Jersey, I was always a fan of Penn State,” Trautwein told gopsusports.com. “It was the best academic and athletic university in the country then, and it remains so today. My family and I are grateful Coach Franklin has given us the opportunity to join the outstanding staff he’s assembled. I could not be more excited to continue building the best offensive line in the country, and to help bring championships to Happy Valley.”

Trautwein will try to better a Nittany Lions offensive line that proved to be a weak point in 2019—despite averaging 190.6 rushing yards per game (36th), Penn State gave up 81 tackles for loss (tied for 92nd) and allowed 32 sacks (98th). 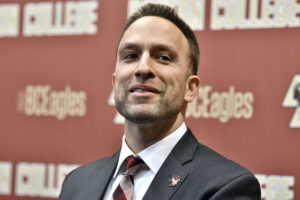