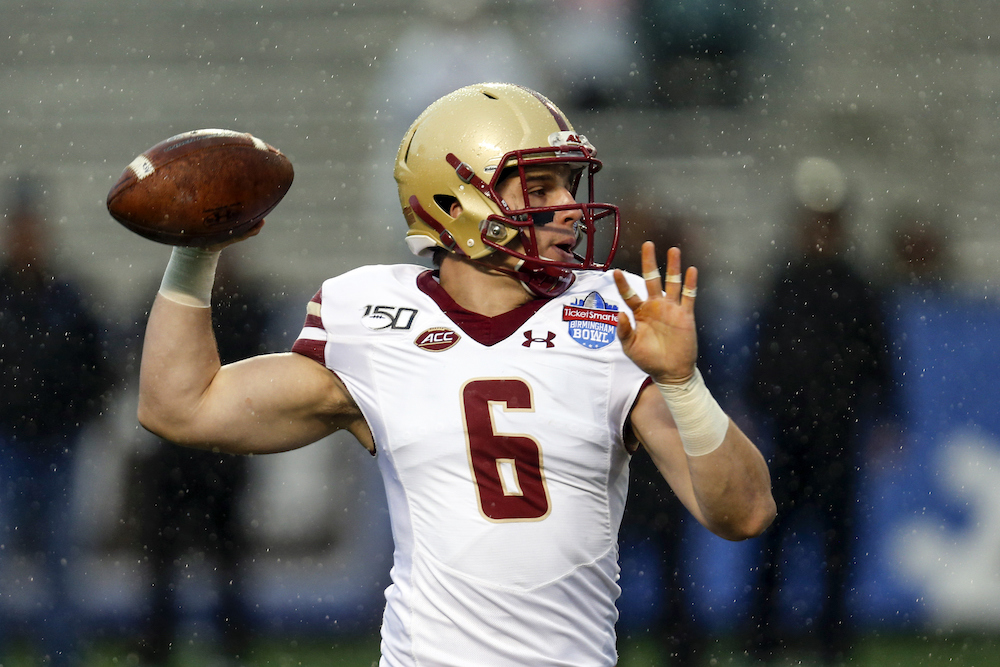 Last year, Boston College and Boise State made history as the first teams to have a bowl game canceled due to severe weather conditions. The SERVPRO First Responder Bowl, held in the Cotton Bowl, was canceled after an hour and 20-minute delay. Just over a year later, that strange occurrence almost repeated itself before BC football’s devastating 38-6 loss against No. 21 Cincinnati in the Ticketsmarter Birmingham Bowl.

While there was no initial delay to the game, a scare 40 minutes before kickoff foreshadowed the ominous weather that would put a dent in the afternoon game’s progress. During the team’s warmups, the field was cleared due to lightning in the area, which resulted in a 30-minute delay before the teams and spectators could return to the field. But since lighting did not strike again during that 30-minute period and the time after, the kickoff was not delayed past the scheduled 3 p.m. start.

Aside from the pouring rain causing less than stellar playing conditions, the Eagles and Bearcats began the bowl with a fairly smooth start. That is, if one considers both teams’ struggle to gain a first down to be “smooth.” In fact, when the game was finally called for a storm delay— lightning struck again with 7:55 remaining in the first quarter—BC and Cincinnati had combined for 21 total rushing yards.

The delay, while initially reported to be 30 minutes, dragged on for an extra hour before the Eagles (6-7, 4-4 Atlantic Coast) and Bearcats (11-3, 7-1 American Athletic) were able to continue their matchup. As soon as the teams came out of their respective locker rooms, they picked up where they had left off, with BC at the 15-yard line, ready to gain momentum and get back into the game.

Collaborative efforts by BC running back David Bailey and quarterback Dennis Grosel lifted BC to two consecutive first downs before Cincinnati’s defense shut the Eagles down, preventing them from converting on any more plays. As opposed to BC’s, Cincinnati’s efforts were consistent and the Bearcats didn’t stick to one specific play to get the progress they needed. They also quickly found the flaws in BC’s defense and worked to exploit them as much as possible.

In their third possession of the game, the Bearcats found themselves able to gain confidence and momentum and push past the Eagles, with Cincinnati quarterback Desmond Ridder eluding the BC defense’s pressure and rushing the ball into the end zone for the first touchdown of the game. And with a good field goal, the Bearcats were up 7-0 with just over a minute remaining in the first quarter.

When the Eagles regained possession of the ball just before the end of the first, they were not ready to give up. An incredible rushing play by tight end Hunter Long put BC 40 yards closer to the end zone and within field-goal range. And when the Eagles’ third down pass by Grosel was ruled incomplete, BC headed into the second quarter needing to make a field-goal attempt to stay in the game.

But when the time came, the Eagles failed to collect the necessary three points. An assertive play by Cincinnati defensive tackle Elijah Ponder allowed the Bearcats to block BC’s kick attempt and keep the Eagles off the scoreboard.

The Bearcats continued to dominate the field, barely allowing BC to make a first down before forcing a change in possession and once more making their own run toward the end zone. The lethal combination of Ridder and Cincinnati running back Michael Warren II drove the majority of Cincinnati plays, allowing the Bearcats to quickly make their way down the field.

The Eagles continued struggling to contain a mobile quarterback as Ridder made multiple rushes himself to acquire a first down for Cincinnati close to the goal line. While the Eagles were able to drive back the Bearcats to the 15-yard line by pressuring Ridder, they were unable to prevent Cincinnati from scoring a field goal, putting BC down 10-0 midway through the second quarter.

Shortly after, the Eagles continued their inability to gain yardage against Cincinnati’s dominant defense. On BC’s 3rd-and-10 play at the 19-yard line, a sack on Grosel caused a fumble, allowing Cincinnati to recover the ball and take over possession. An offsides penalty called against BC defensive tackle TJ Rayam put Cincinnati 14 yards from its end zone, well within field-goal distance, and ensured that the Bearcats would likely get at least three points. But Ridder took it to the next level, running the ball in for his second touchdown of the game, adding seven points to the Bearcats’ rapidly growing lead over the Eagles.

Early in the second half, Warren continued to outrun BC’s defense, picking up 14 yards, dodging defenders on his way to the BC 32-yard line. After a few more successful plays by the Bearcats’ offense, Ridder found himself 14 yards out from the goal line and threw a pass into the back left corner of the end zone—where Cincinnati wide receiver Malik Mbodj was ready to receive it, tallying his first touchdown of the evening.

The Bearcats had struggled to get past the Eagles’ defense late in the third and punted it after an unsuccessful third down. But BC defensive back Mike Palmer was there to block the kick, allowing his fellow defensive back Brandon Sebastian to scoop up the ball, run it down the field, and pick up six points for the Eagles. BC then opted to go for the two-point conversion as opposed to the field goal attempt, but it was unable to collect the additional points, leaving the Eagles down by 18 heading into the fourth.

The Bearcats continued to control the game in the final quarter, unwilling to let the Eagles have a chance at a late-game comeback. Cincinnati scored two more touchdowns in the fourth, one by Ridder and a second by running back Ryan Montgomery, to close out the game with a score of 38-6. With the win, the Bearcats secured back-to-back 11-win seasons and back-to-back bowl wins.

With this loss, the Eagles finish their 2019 campaign with a 6-7 record, their first losing record since 2015, when they had gone 3-9 and 0-8 in the ACC. While BC is losing some of its key players this season, the Hafley era will hopefully bring better times and a more successful program.