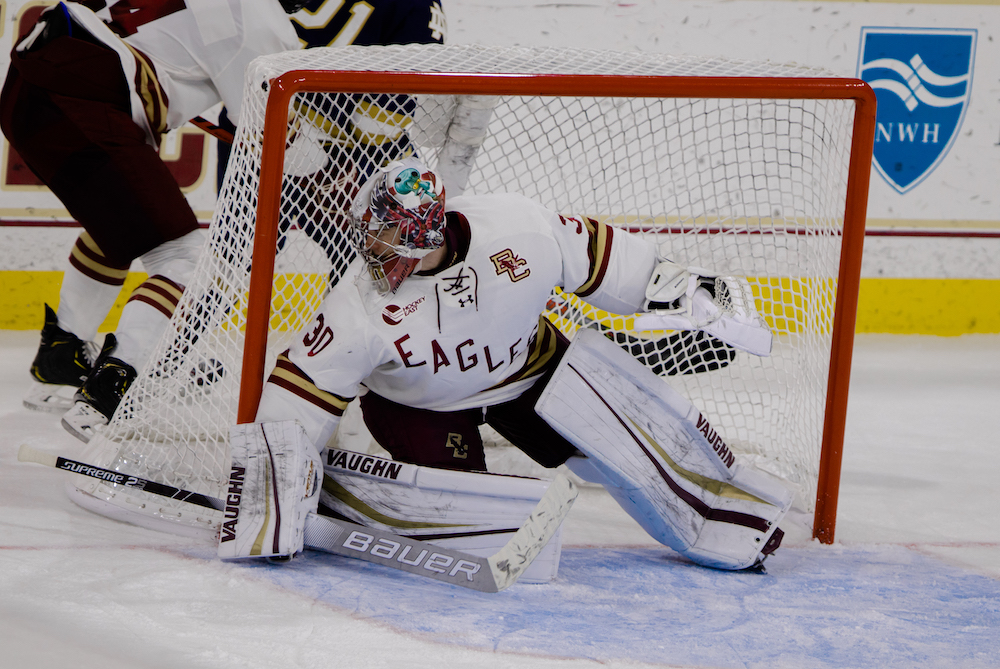 Heading into Friday’s matchup against No. 10 Massachusetts, Boston College hockey had a lot riding on a win on home ice. No. 4 BC (12-5, 6-3 Hockey East) entered the matchup riding the second longest unbeaten streak in the nation, and before Friday, the Eagles hadn’t fallen at home to Massachusetts (14-6-1, 7-3-1) since Jan. 18, 2013. Even so, in a game characterized by powerhouse goaltending, the Eagles fell 3-1 to their conference rivals.

The Eagles had an early advantage when UMass’ Bobby Trivigno took out Julius Mattila just seconds into the first period, earning him two minutes in the box. David Cotton took the first shot of the game, but the puck couldn’t find its way through the heavy traffic, and the Minutemen killed off the penalty without much struggle.

Heading into the first media timeout halfway through the period, it looked like UMass was in desperate need of a break. After four minutes without a whistle, the Minutemen were playing on their heels.

Yet despite the Eagles’ control of the puck, UMass nearly capitalized on an attempt to pull ahead. After blocking a shot by Anthony Del Gaizo, Spencer Knight was pinned down with an empty net. Despite an open target, Patrick Giles poked the puck away from BC’s cage before the Minutemen could get to it.

Following the media timeout, Logan Hutsko caused a turnover, allowing John Leonard to close in on Knight without a defender. The Massachusetts native snuck the puck through Knight’s legs, securing the first goal of the evening.

Four seconds after Leonard’s goal, Connor Moore went to the box for high sticking. The majority of the goals Knight has allowed this season have come during the power play, but Massachusetts couldn’t manage a single shot on him.

Later, Knight deflected a shot to Alex Newhook, who took it all the way down the ice, using his speed to get behind his defenders. His advance came as a surprise for goaltender Filip Lindberg, who couldn’t react fast enough before Newhook buried the puck into the net.

Head coach Jerry York could only sing the freshman’s praises.

“I think Newhook was clearly our best player,” said York. “His speed and his energy was really impressive to watch.”

The Eagles came off another penalty kill strong and settled in around Lindberg. Hutsko, Matt Boldy, and Moore all ripped shots on the sophomore, but they couldn’t get through the defense.

After a few minutes in the offensive zone, the Eagles gained another advantage after Colin Felix pulled Graham McPhee’s stick. BC took shot after shot on Lindberg, and it took the goaltender jumping on the puck to get a break. Newhook ripped a shot directly in front of Lindberg, but the goaltender snagged it out of the air. After an aggressive two minutes, the Eagles couldn’t find an answer for Lindberg.

When Boldy closed in on Lindberg in the waning minutes of the second frame, it looked like he was going to earn the Eagles’ first lead of the game. He crashed the box without any defenders, but Lindberg stuck a foot out and denied Boldy once again. Despite the aggressive campaign from the Eagles, the game was to be decided in the final frame.

Both BC and Massachusetts created golden opportunities for themselves in the opening minutes of the final frame, but Knight and Lindberg followed the puck like magnets to block any attempts.

After an even 10 minutes, a slashing call on Luke McInnis gave the Minutemen an advantage. UMass has struggled on power plays throughout the season, and Friday’s matchup against the Eagles was no different. They took a long time to get set up, and BC took advantage of their weakness. Mattila setup Moore, and he barely missed the cage, his shot ringing off the pipe. After 30 saves from Lindberg in 50 minutes of hockey, BC still couldn’t crack him.

Deep in the third, Boldy was in familiar territory as he closed in on Lindberg. But just like his attempt in the second period, he was robbed with an opportunity to pull ahead.

A minute later, the Eagles found themselves in a position similar to that during their matchup against Harvard in November. Jake Gaudet wove through heavy traffic and snuck a shot past Knight, putting the Minutemen ahead of the Eagles with just three minutes left in the game.

With just under two minutes left in the game, the Eagles pulled Knight. The extra player still wasn’t enough to get past Lindberg, and Leonard pulled away from the Eagles and drove home the game-sealing goal.

Despite the outcome, York was impressed with the level of intensity from the Eagles in Friday’s game.

“I thought that was a real good hockey game,” said York. “We knew heading into the weekend that it was going to be a great test for us, and it was. It felt like playoff intensity. We’re talking in early January, but it had that feel to it.”

No. 3 Northeastern Topples BC in 6-0 Rout
Dailey to Replace Gunnell as Wide Receivers Coach