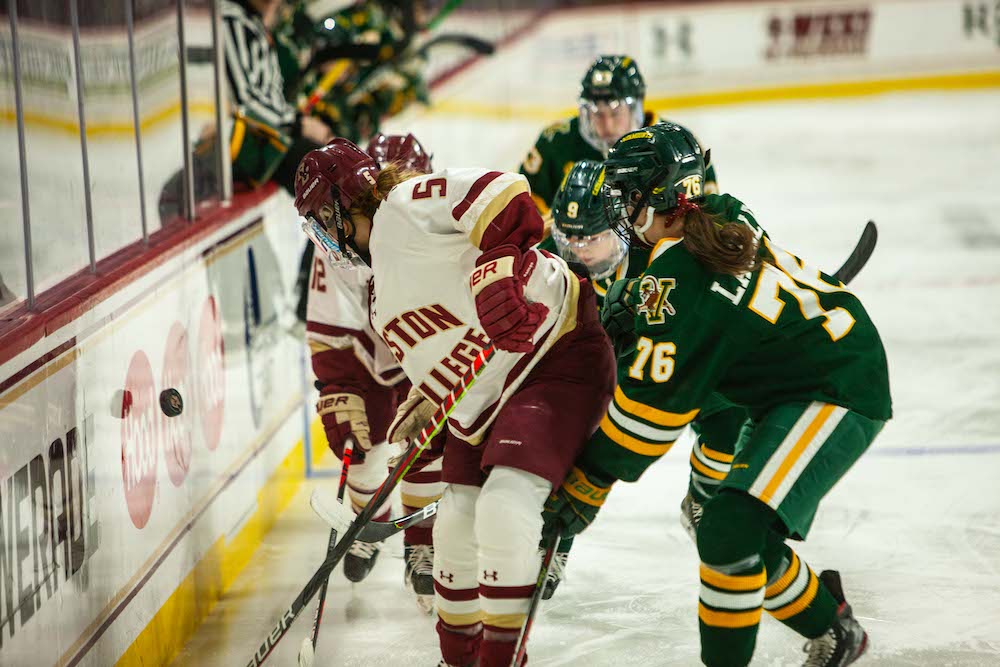 Before Conte Forum would be filled with Eagles fans cheering for Boston College men’s hockey against Comm. Ave. rival Boston University, an incredible OT thriller took place between Boston College women’s hockey and Vermont. While the Eagles (12-9-3, 11-7-2 Hockey East) maintained an early two-goal lead, the Catamounts eventually found the net and evened the score to send the game to overtime, where play remained at a 2-2 stalemate.

Senior Delaney Belinskas had both of the Eagles’ goals on the night, an impressive effort that head coach Katie Crowley attributed to her parents being in town for the weekend. Within 20 hours, the forward had five goals total between the two games against Vermont  (9-10-6, 6-8-4).

The first goal came when Belinskas brought up the puck from mid-ice. She faked out a Vermont defender and sent the puck up to Hannah Bilka, who faked out the remaining last player behind the puck. With Belinskas cutting down the middle of the ice toward the goal, Bilka quickly sent the puck her way again. With nothing between her and Catamounts’ goaltender Blanka Skodova, the senior slid the puck in to give the Eagles an early lead.

Later in the period, in the midst of a BC power play, Bilka nearly doubled the lead, but in the act she stumbled over Skodova in goal. A few Vermont players rushed Bilka to confront her, but the refs broke up the scuffle before anything started. From that moment on, the game became very chippy.

The most impressive goal of the night happened to be Belinskas’ second. For the first two periods, the Eagles pushed the puck up the ice in transition and outskated many of the Vermont players. Belinskas passed multiple defenders, and with no one in front of her, she sniped a shot from the faceoff circle right past Skodova. Although this was the final BC score of the night, the game was far from over.

Throughout the game, the Eagles had packed the defensive line with up to three Eagles players surrounding the sole Vermont player with the puck. This scrappy style of defense lent to numerous opportunities for chippy play and rough hits by members of both teams.

One such moment came when Cayla Barnes got into a scuffle behind the goal with Corinne McCool. Barnes fell to the ice after hashing it out with McCool, and not willing to go down without a fight, she set a hard shove on McCool, sending her spiraling to the ice. This went unnoticed, but then the pair found themselves going at it behind the goal, which finally caused the refs to stop play and issue penalties on both sides.

Throughout the rest of the game, there were numerous similar shoves and near-fights, but that did not stop Vermont from getting on the board with a goal of its own from McCool after she returned to play following her penalty.

All of the previous fighting carried into the third period as a hoard of players got into it. It started when Vermont’s Hailey Burns plowed into BC’s goalie, Maddy McArthur, causing Barnes to come rushing to her defense. Again, more penalties ensued, and Vermont was able to even the score when Theresa Schafza notched her first tally.

For the rest of the game, the Eagles looked increasingly tired and were not getting out as fast in transition as they had at the beginning of the game. Again, numerous shots just nearly missed the net, but the game would be sent to OT, where only Schafza had a final shot that nearly went through the legs of McArthur.

“I think we need to take more advantage of our power plays and find a way to score,” Crowley said about the close game.

“Every game means something, and we need to really start to step up our game and play like how we should play. Our team is young, so we need to keep working, trying to get better, and learning from our mistakes for next weekend against Providence.”