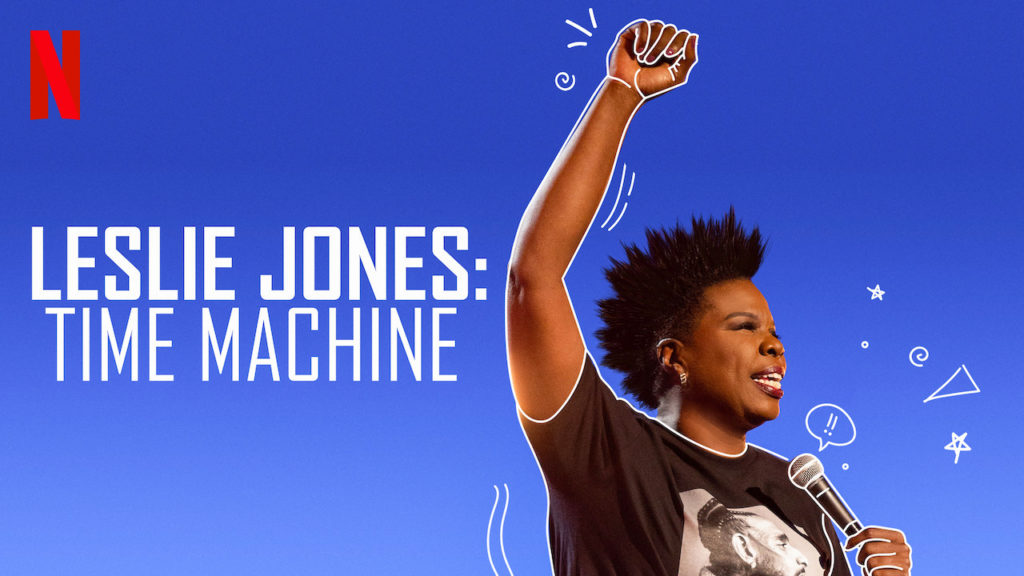 Greeted by an already standing audience, Leslie Jones not only takes the stage but dominates it in her new comedy special, Time Machine. The special premiered Tuesday on Netflix, marking Jones’ latest outbreak since she left Saturday Night Live in 2019 after five seasons. From the genuine joy breaking through her laughter and smiles throughout the hour, it’s clear that Jones is in her element performing stand-up, a fact that not only softens the blow of her departure from SNL, but also serves as an exciting glimpse into Jones’ future endeavors.

Jones begins the special with high energy that mirrors the crowd’s. Sporting a knee brace on the outside of her jeans, Jones assures the audience that she truly no longer cares about what others think of her. She stands as a strong, fiery woman unashamed of the possibility that she may intimidate men because she “looks like she can fight.” Her confidence is as contagious as her laughter.

Throughout the whole special, it’s hard to dissect exactly which bits were pre-written and which were composed on the spot. Jones jumps from vividly describing stories of attempting to seduce Prince and fighting her ex in a dog park to jumping off the stage to attack front-row audience members and taunting a woman for wearing a Little House on the Prairie sweater in her 20s. One thing is clear, though: Jones was made to perform. Laughing uncontrollably at her own jokes at times, at one point she audibly exhales as her face falls into a beaming smile: “This is so fun.”

Audience participation is a constant throughout the hour—at one point the whole room breaks into song, echoing Tevin Campbell’s “Can We Talk?,” with Jones leading them through the chorus. Standing alone on stage beside a stool and a microphone, she turns both objects into props that enhance the hilarity of her storytelling. Using the long cord of the microphone, she raises it above her head and allows the cord to cascade down her back to give the audience a more exact image of the ponytail weave of her 20s. Leaning over the stool at one point, she wobbles toward the audience on what has now become her walker as she imitates her 90-year-old fed-up self.

Laughter is one of the few things in life that keeps us grounded. Jones seems to understand this well, proving time and time again throughout her special that a good sense of humor is essential to living in the present. Behind the constant sexual references, the vivid descriptions of her promiscuous past, and the hilarious scream-laughing at her own jokes, Jones incorporates life lessons that elevate her routine from strictly comedy to something deeper.

The special’s title, Time Machine, turns out to be a metaphor for the time Jones spends reflecting on both her past and present. Before the crowd is brought to its feet again and the credits roll, Jones concludes her special by exploring what it would be like if she came across a real time machine. She admits she would return to her 20-year-old self to deliver her wisdom. She would tell herself that it’s all going to be OK and that she should eat a vegetable every once and while. She would tell herself to lean into her passions and be confident in her humor.

But alas, she accepts the truth to be that the 20-year-old Jones would not be the least bit receptive to her advice. She must live it out herself and experience life. She concludes that her 90-year-old self would greet her with rage for worrying about her future when she is still so young.

Living in the present is hard. Keeping your mind from wandering off from the path where your feet stand is more difficult than it may seem. With her ability to find humor between the lines of her past stories, Jones proves to be a champion of reflection. At the same time, though, she is a master of living in the present. Laughing, singing, and dancing through life appears to be her strategy. With no time machine to speak of, she has accepted the fact that we can’t change the past and we can’t see the future, so we might as well embrace today.