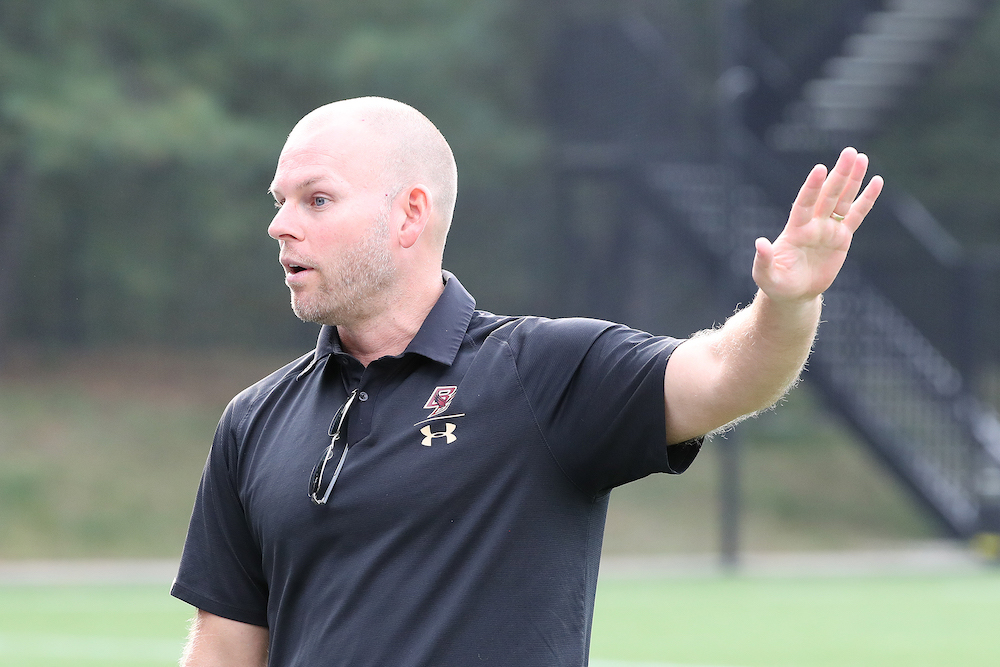 Ed Kelly, the winningest coach in Boston College men’s soccer history, walked off the field for the final time as BC fell to Washington in the second round of the NCAA tournament in November of 2019. Just a few days later, he announced his retirement from coaching.

The Eagles found Kelly’s replacement in Bob Thompson, the former associate head coach and later interim head coach in Kelly’s absence. As of Thursday, Thompson’s position lost the interim title, and he will take over full-time for the 2020 season.

“We saw immediately the positive impact Bob had on our soccer program last season when he became interim head coach,” said Director of Athletics Martin Jarmond in a press release. “We are thrilled to have Bob lead our men’s soccer program. As a former student-athlete here at BC, he knows first-hand the heights men’s soccer can achieve and we look forward to watching the program under his leadership.”

Thompson spent two seasons in his former position as associate head coach before making the transition to interim head coach upon Kelly’s retirement.

The Newton soccer field is familiar territory for Thompson. He played for the Eagles from 1999 to 2002 before graduating from BC in 2003. In his time as a player, Thompson and the Eagles won two Big East championships, had three appearances in the NCAA Tournament, and made one trip to the NCAA Elite 8. In his senior season, the team notched a program-record 18 wins.

He was the Big East Tournament MVP in his sophomore and senior years and earned All-American Honorable Mention in his final season. He finished his career in the school record books with top-10 program records in numerous categories. Thompson played under Kelly in his time on the Heights before working alongside him ​as an assistant coach and later an associate head coach.

“BC provided me with a world class education, incredible success on the field as an athlete, and lifelong friendships that I will be forever grateful for,” Thompson said in the press release. “As head coach, I see this as an opportunity for me to give back to Boston College by leading this special program and our incredible student-athletes into a bright future.”

Directly after he graduated from BC, Thompson played three seasons in the MLS with the New England Revolution.

Once retiring from professional soccer, Thompson returned to the Boston area to coach at Northeastern from 2007 to 2010 and then transitioned to Tufts for two years. After Tufts, he returned to BC for two years as an assistant coach and recruiting coordinator.

After two years at BC, Thompson worked at UMass Lowell as an assistant and associate head coach from 2014 to 2018. With the River Hawks, Thompson helped coach the team to a nearly 200-place jump in the national rankings—up to as high as No. 3 in 2016. That season, the River Hawks finished the year as America East Conference Champions.

Finally, Thompson headed back to his alma mater in 2018 as the associate head coach. In his second stint coaching the Eagles, he helped the team to its first NCAA appearance since 2016 before the Eagles lost to Washington in the final round.