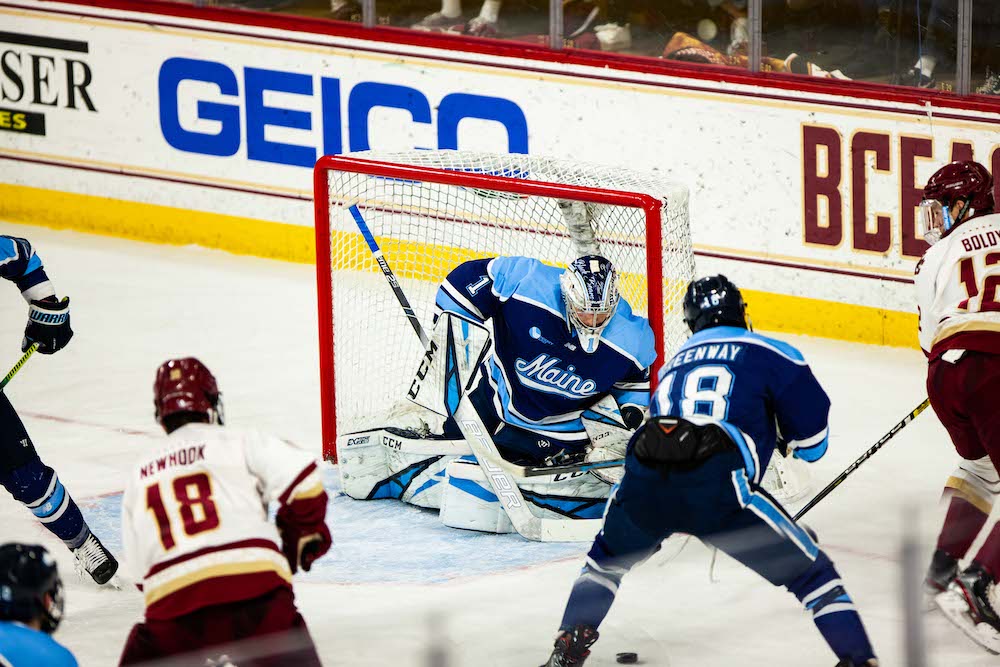 Eagles Fall to Maine in Overtime After Losing Early Lead

If you were to only watch the first period of Boston College men’s hockey’s matchup on Saturday, you would see that BC was the far more dominant team. The Eagles played well to start the game, getting excellent chances against Maine, but goaltender Jeremy Swayman denied each of their shots. BC failed to capitalize on a man advantage early in the period, but the Eagles were not deterred.

With five minutes remaining in the frame, Aapeli Räsänen forced a turnover in the defensive zone, sending teammate Ben Finkelstein on a breakaway. Finkelstein shot a one-timer at the net that was denied by Swayman, but freshman Mike Hardman was there to pick up the rebound and collected his seventh goal of the season.

Shortly after the Eagles opened the scoring, Maine picked up a high-sticking penalty, giving BC its second power-play opportunity of the night. It only took the Eagles 10 seconds to increase their lead, with Alex Newhook and Matt Boldy trading passes back and forth until Newhook shot a one-timer, beating Swayman blocker side.

Not only did the Eagles score twice in the back half of the period, they also limited Maine (11-9-4, 5-7-2 Hockey East) to only eight shots on goal, showcasing their ability to shut down a high-caliber opponent.

That, however, was not the story of the game. After looking like the clear winner in the first, No. 4 Boston College men’s hockey (15-6, 9-4) allowed three goals in the second period to give up the lead.

Thirty seconds into the second period, Maine senior Tim Doherty shot the puck just over the pads of Spencer Knight, cutting the Eagles’ lead in half. Shortly after Doherty’s goal, AJ Drobot shot a wrister into the net off a centering pass from teammate Mitchell Fossier. Drobot’s tally tied up the game after only five minutes of play in the second period.

While the score itself would be a testament to the Eagles’ struggles in the second period, the advanced stats also have something to say. While BC had gotten 16 shots on goal in the previous period, the Eagles were only able to put five shots on net in the second. The majority of the frame had been played in their defensive end, with Maine battering Knight with shot after shot.

BC did begin to pick up the pace as the period played on, the Eagles trying their best to stop Maine’s chances before their opponent made it to the net. And yet, they could not prevent the Black Bears from taking the lead. Seven seconds after captain David Cotton was called for slashing, Fossier collected a goal of his own, tipping the puck past Knight and putting the Black Bears up 3-2 heading into the third period.

The Eagles came out of the second intermission reinvigorated, looking refreshed after their subpar second period. But Swayman was ready for them. The Eagles had incredible chance after incredible chance in the final 20 minutes, but the Maine goalie was a brick wall, making seemingly impossible stops to keep BC down by one.

Midway through the final frame came the Eagles’ greatest challenge. Zach Walker received a five-minute major and a game misconduct penalty for checking from behind, putting the Eagles down a man when they desperately needed an equalizer. Through a stroke of luck and excellent goaltending by Knight, BC killed off the entire penalty, the Eagles even managing to get some chances of their own.

The game continued as it had before—BC getting great chances at tying the game, only to be stopped by Swayman. That is, until late in the period when Maine picked up a delayed tripping penalty. The Eagles pulled Knight to get an extra man on the ice before the penalty was called, but nothing resulted, and the play came to a stop when Maine regained possession.

And so, with just under two minutes remaining on the clock, the Eagles pulled Knight and went to 6-on-4 play. Five seconds after the initial call, Logan Hutsko pulled off the impossible. After collecting a setup from Boldy, Hutsko beat Swayman glove side, sending the game to overtime.

The Eagles got an initial chance early on in the extra time, but it was all Maine after that. The Black Bears controlled the puck, and Doherty was the one to deliver the final blow. Teammate Eduards Tralmaks beat BC to the puck along the goal line and sent it to Doherty, who backhanded the puck past Knight for his second of the game.

“I think the bottom line is we didn’t play 64 minutes of hockey,” said head coach Jerry York following the loss. “I thought there were stretches where we played well, but [we didn’t play] consistently through the 60 minutes.”